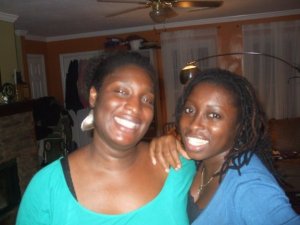 *OK, so this isn’t really an “ode”. Who has time to formulate rhyme, stanzas and onomatopoeia in 2010?

Nana Darkoa Sekyiamah is my BFFFL. My Best Friend for Freakin’ LIFE…ya heard?

It’s funny, but when you first meet someone, you never know what kind of impact they’ll have on your life. When I first met Nana, aka Sisi, it was 1994 and we were both new students at SOS HGIC. She didn’t make much of an impression on me at first, unlike some of the other girls in our class. The average age of our class was 16, so of course, everyone felt “cool” and had something to prove. The only thing I remember about her from our first weeks was this t-shirt she used to wear during prep that was emblazoned with HUGE lettering. It read: Love me, hate me…I’m still Sisi.

Sisi is one of the most unassuming people you’ll ever meet, but underneath that cool exterior is an out and out gangsta. There are very few women you will meet in life who can say they have, are and will always do things “my way”, and she’s in that elite group. Sisi and I became fast friends during our Higher Level History class. I did my extended essay in English. She did her hers on cultural symbols and their affect on Ghana’s relationship with invading Europeans and colonization. I thought my essay was brilliant, but mine didn’t get recognition from the IB board in Geneva and go into publication, did it? Her’s did.

Here’s the truth. I’m crazy, but Sisi has stumped me with several WTF moments during our friendship. In 2002, she told me she was going to get her Masters in feminism studies (or something). WTF was she going to do with a MA in feminism? Turns out they have jobs that pay you for that, she now she’s sitting cush behind some desk in East Legon.

She married her childhood friend shortly after that and 2 years later they were divorced.

“Why are you guys splitting up?” I asked. I thought they were made for each other. I was at their wedding. I had fish.

She said something about her spouse’s  lack of ambition and her loss of interest. WTF??? You mean he wasn’t beating you or stealing all your money? Who gets divorced over something like that? Nana Darkoa, that’s who. And she’s all the happier for it.

And now? Now she’s launched a clothing line in Accra; MAKSI clothing. The name sounded queer at first, but now it’s ALL OVER the streets. Who launches a clothing line in Ghana anyway? Everyone wants to wear fashion from “abrochi”, not made in Ghana stuff. Well they did, until Sisi and her ilk came along with fashion so hot, it made me want to jump on a plane to restock my closet. I read on some news-wire that MAKSI clothing was part of the Ghanaian ‘new cool’. Dang! Stumped again.

So there you have it folks. There’s my expose on my BFFFL. When she’s on CNBC’s ‘100 Most Influential Women in the World’, you can proudly say you read about her here first. I’d like to say more about her, but her naked, drooling nephew is clawing at my feet and needs some attention. Oh look. Now he’s biting me. Gotta go!

The Uncomfortable History Behind the Idiom ‘We Was Kings’