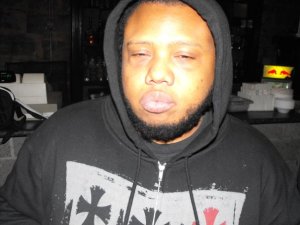 Quick! Take a good look at this face. Would you let this man watch your kids? Look deeeep into his half closed eyes and tell me what’s the first thing you think of.

Whatever it is, I bet you’ve got it all wrong.

This is Chris, my daughter’s first baby sitter. That’s right. I entrusted my child’s life to this cracked-out looking Black man. The fact is, Chris is not on crack. He’s a narcoleptic; and being a narcoleptic he comes with a special set of skills that are invaluable when caring for a new born. Well, they were invaluable to me during my short stint as a single mother at least.

Chris’ condition means he also has insomnia…which means he can stay awake for days at a time. When Nadjah was but a wee thing, he would stay awake all night playing Halo while she lay on the sofa next to him. This meant that I was one of the few new mothers on the planet who can say she got a full night’s sleep for weeks when they brought their first child home.

Chris was an exceptional nanny. He knew what temperature Nadjah liked her formula at and how she liked to be held. On several occasions, Nadjah would whimper quietly when I went to pick her up from his apartment after work. Exasperated, he would snatch her from me like a fussy mother hen.

“You’re doing it all wrong!” he would admonish. He would then demonstrate the proper technique to carry my preemie newborn.

In contrast to my daughter’s douche-bag genetic donor, Chris would make sure she never missed a 3 am feeding. He was awake, after all. On the 2 occasions I allowed Old Douche to keep her overnight at his place, he called me frantically at 1 am and 3 am asking why she was crying.

“I told you she needs to eat every two hours!” I yelled.

“I was just gonna let her sleep through the night,” he said in simple explanation.

“Well I told you you were going to have to get up to feed her.”

When I relayed the story to Chris, he was far from ‘polite’ about his feelings on the matter.

“She’s not allowed to go over there again…ever” he said sternly.

Now that Nadjah is all grown up and our family has moved further away from Chris’ home, he is free to spend his time sleeping as he pleases and waking when he’s able.

So I’ll ask you again: Take a good look at this picture. Would you let this man care for your child? No? Dag. Chris is a scarier looking dude than I thought…