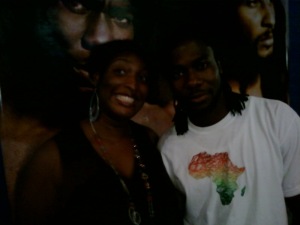 Gawd I’m such a groupie.

That very fine dark cho-co-late man is M3nsa, the other half of the duo Fokn Boys. He traveled aaallll the way from Spain to give us a screening of the film Coz of Moni, a Ghanaian musical done entirely in pidgen English.

It was 45 minutes of brilliance.

I haven’t cackled that hard in a few weeks, so it was with great joy that I forked over $15 to buy the DVD after the show was over. And because I paid $15 to enter the show, and another $15 for my husband – who has a limited understanding of pidgen – to enter the show, and a $2.50 ATM surcharge to get the money to buy aforementioned DVD, I was all over the star of the film like stink on poo. Not to mention I neglected to put on nursing pads before I left the house. No sooner had the film started, I felt a warm wetness drip down my back. Marshall offered to go get me some paper towels and in the darkness of the theater I padded my bra to stop the flow of liquid gold. I required much in repayment. I took his autograph on my CD, made him write a dedication to me on super big Post It, and took 3 pictures featuring me grinning like an Adenta bred Cheshire cat. I asked M3nsa if he felt appropriately “groupified”. He giggled in response. Mission accomplished. Was my husband embarrassed?  Of course. When is he not when we go out together?

As we left the theater, a massive 6′ 4″ Black man stopped us and humbly asked us for assistance. A victim of the economy, he (Michael was his name) explained that he had lost his job and needed some items on his grocery list. I caught a gleam in Marshall’s eye. If you are going to ask me for my money, you are going to hear about Christ.

After we went to Kroger and picked up a few items on the list, the most important being diapers (according to Michael), Marshall began to ask him about his spiritual life. It turns out the guy was the typical American Christian: given to some vice (his being drink), neither a zealot nor really dedicated but somewhere in the middle, did not have a personal relationship with his pastor and had not been to church in more than a month – which means 6 months. Marshall gave him what I felt was really good counsel and encouraged him to be an example to others even in his economic state.

“Even though I still have my job, I don’t have much money either,” Marshall confided. “I still have to be a godly example to my family and society.”

They exchanged a few more words, gave each other a manly hand shake and hug and bid each other farewell. Michael watched us hop into Marshall’s shiny black Mercedes as he trudged off in the thick Atlanta humidity, lugging his groceries in thin plastic bags. I could almost read Micheal’s mind. Not much money huh? I couldn’t help but feel like a little bit of an impostor. Marshall pointed out that his car was 13 yrs old and only worth $3000. That made me feel much better very quickly.

Yes indeed, it was a fokn fine evening for everyone.