Two co-workers encounter one another in the bathroom. One has just finished using it and the other walks in as she’s exiting the stall. They greet each other enthusiastically.

“How’s everything going out there on the floor?”

“Not too bad. We’re starting a new project this week.”

“Awesome. I hear there’s a pretty nice bonus in it for you guys if it goes off well.”

The second co-worker enters one of 3 available stalls.

She lines the seat with wax paper, the crinkling sound interrupting their discourse.

“I heard your daughter made varsity,” the first co-worker continues.

“Yeah,” the second one says painfully. A splash of urine hits the stagnant water in the bowl below. This signals the end of the conversation. Co-worker One leaves the bathroom without another word. Co-worker Two pushes a steady stream of urine from her bladder, sighing in sweet relief.

Why do people engage in bathroom chatter? It’s a place for going to the toilet, not a pub or park for Heaven’s sake! Disturbing as it is that folks congregate and chew the fat in an environment where they’ve just disposed of their bio-waste; far more disturbing phenomena take place behind the walls of the stall from which they’ve just emerged. One of those is the acting of a silent comedy, so impassioned that Charlie Chaplin himself would be proud. It comprises of facial contortion, stamping of feet, and (violently) rocking back and forth.

Take me, for example. I can hold my pee for hours…which means when I do pee, I can pee for minutes. The average person takes what? 32 seconds to pee? I can pee for 2 whole minutes. And not a trickle either. We’re talking bursts and gusts of pee…like Niagara Falls force. So when I finally do get to the throne room, it is with much relief that I engage in my release. Head back, eyes closed, exhale. *Ahhhhh….*

Did you know people make faces on the toilet? Here’s the one I make when I’ve been sitting in a dull meeting for hours on end, sipping on agua like a bloody idiot. (The worst thing you can do to yourself is to enter a 2 hour scheduled meeting with a semi-full bladder and then pour yet more water on top of that in an attempt to look “corporate-y”.) That’s what’s going on behind the stall walls if you should encounter ME in the restroom.

There are far worse things that happen in public restrooms. People deface them with graffiti, pump breast milk because there are no designated feeding rooms in their place of employment, have sex in them (ech!), and hide their identities in them. Take a look under the doors of the stall next time you’re in the ladies room. If you hear urine, and see the heels of a woman’s feet and not her toes, then that’s not a woman at all. 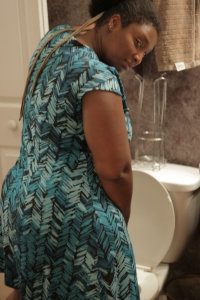 The Surprising Ways In Which Helping Others Can Also Help You

This article has 13 comments