To shart: the phenomenon through which when farting, a little bit of dookie ends up in your pants.

The more I think about marriage, the more I realize that it’s really one of the hardest things a person could ever do successfully. It’s easy to fail at marriage – I mean, all you have to do is never change the person you were when you first got married, and *poof!* Six years later you’re in divorce court, cutting your eyes at the man/woman you previously stood before God and friends saying you would love ‘til you were both parted by death.

I don’t generally speak to my male friends about their marriages. Over all, I wager men spend less time thinking about their marriage than women do. After all, what does a man sacrifice when he gets married? Other than drunken weekends out partying until 3 am with his boys and a few hookers, not much. Women have to give up their identity, their ambitions, their bodies through child birth, and sometimes their carefully crafted relationships when that marriage results in a family relocation (<–insert my doubts about moving to South Africa here).

Take this one lady from my church. Her husband was a mega basketball star in college, and they got married just before or soon after graduation. He was being considered for the NBA, but he sustained an injury, ending his pro career before it even began. She, being very young at the time, was clearly concerned about their future.

She didn’t say it, but I could ever so briefly see the disappointment she felt 20 years before flash across her face. Fortunately for him, she loved him more than their potential glitzy professional basketball lifestyle, and they’ve remained committedly married since.

This speaks to my earlier point about change. So many people get married hoping their spouse will never change. Had she stuck to her scripted “I am only going to be the cute wife of a pro ball player” part and chosen NOT to change, their marriage would have ended as quickly as his basketball career.

That’s when a fairytale has been sharted on.

I’ve never harbored fairytale ambitions for my own marriage, primarily because my own parents were so miserable together that I envisioned marriage as something I HAD to do to fulfill a cultural obligtion, rather than something I was looking forward to.When I was a little girl, I never envisioned my future husband and I seated around the table, while our perfect children employed impeccable etiquette as they consumed their meals before retiring to bed.

My family was horribly dysfunctional. My parents’ relationship was blatantly ascorbic, and it took a toll on all of us kids. The day they announced they were divorced was one of the most joyous events of my young life. I can’t imagine that either of them willingly entered into their union thinking that they’d spend two decades abhorring the other person with whom they shared a home and children. I’m willing to bet that they assumed they’d grow old together and entertain their (presumed) perfect grandchildren for holidays and birthdays. Clearly that will never be.

Now THAT’S a fairytale that’s been sharted on.

So what’s my point? Marriage, like life, is not a fairytale. It’s a grueling, painful growing process. Unless the vows you said pledge something other than the standard, you have sworn to become “one flesh” with that other grinning idiot across the aisle from you.

Do you know how hard that is? Let me paint a picture for you: 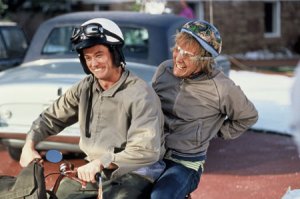 Getting married instantly transforms you from a pair of individuals into a pair of Siamese twins. The only way it’s going to work is if you both agree on what direction the two of you are going to take together. And if you can’t agree, one must submit to the direction of the person who is at least moderately more learned on a disputed matter. Someone is going to have to take the lead until you both instinctually know what’s going to work for the pair of you – and that takes lots (and lots) of time.

Perhaps then is it possible to have your “happily ever after” and avoid a sharting.