Snniiiiifffff!!! Ahh…Spring. There’s pollen, pollen everywhere (gag!). The potbellied carpenter bees are digging holes in my siding, Atlanta drivers are driving like they have less sense, and Kohl’s advertising budget is on steroids. All these things can only mean one thing: The Easter season is upon us.

I love Easter. It’s the one time of the year where the cynic in me fueled by the ridiculousness of an ungrateful, churlish American public. It’s also the time of year where as a Christian, I am greatly perplexed. Why Malaka! Whatever do you mean? Well, let me answer your question with a question – or three.

Have you ever heard of Ramadan Clause? What about the Id Bunny? Ever eaten a chocolate covered Shinto egg? No? You haven’t? Well there’s a good reason why! It’s because other religions don’t water down their sacrifice TO and the sacrifice OF their God/gods like Christians do. Easter, the cornerstone of the Christian faith, has had its spirituality so commercialized to death that there’s almost no point in celebrating it. Almost.

What do I mean?  In 2 weeks, right here in Atlanta, a huge helicopter ferrying hollow plastic eggs will drop its load upon hundreds of waiting attendees below somewhere in Midtown. These people will in turn scramble and trample upon another to try and gather as many of the candy filled oblong shapes as they can… a throwback to organized Easter egg hunts of their childhoods. What do eggs and chocolate have to do with Christ’s death and resurrection from the dead??

It’s generally at this point in the month where I sit back and laugh at it all. This is when big box retailers like Wal-Mart, Ross and Target go into advertising overdrive to try to entice people into their stores as they peddle floral and polka dotted Spring dresses. And why shouldn’t they? This is the one time of year when people who otherwise NEVER go to church do attend, just to keep Grandma happy. They’ll need something appropriate to wear, won’t they? The pastor may (or may not) mention that this was the weekend  Jesus rose from the dead, but he will certainly ensure that the congregation is piqued to partake of the Annual Easter Egg Hunt in the sprawling back lot right after church. You know…something fun for the children. Death and resurrection aren’t fun topics. All that blood and gore. Blech!

Poor Jesus. It’s like the Easter Bunny came out and took a chocolate pebble dump all over His sacrifice, as we mortals egged (no pun intended) him on to do it. 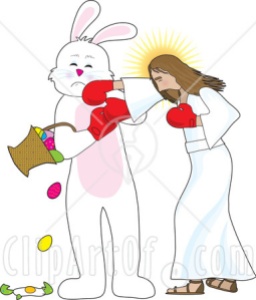 I mean, the Man was tortured and hung on a wooden cross for goodness sakes! Can He get a “ta-daa!”? Some sort of appreciation from the global audience? Even if you’re not a Christian, you have to admit that a coincidentally timed earth tremor at the exact moment of your death, arranging to have a dude pose as an angel in your grave cave to report that your body is nowhere to be found because you’re ALIVE after a few dozen people watched you die, and THEN floating (yes floating) into the Heavens a week or so later in front of a report 500 people is a pretty impressive “trick”.

I can just see the Lord right now:

“Abba, it’s our People again. No one really seems to appreciate My sacrifice,” says Jesus.

“A few do,” says the Holy Spirit, trying to console Jesus.

“You’re such a Comforter,” says Jesus in appreciation. “Thank you, but it still hurts.”

“You want me to send a flood? Shake ‘em up a little bit?” asks the Father.

“No, no! That won’t be necessary. Besides, You said you wouldn’t do that again. I-I just wish that my brethren loved and appreciated what I did for them. Do you know how much that –ish hurt? The Roman dude with the cat o’nine tails? He whipped me for hours!”

“And then they go and water down my sacrifice – heck, sometimes not even mention it – for an Easter Bunny?? That hurts. That cuts me deep.”

“Hey,” says the Holy Spirit, “they’re human. You can’t really blame them. They only use 10-20% of the brain power We gave them anyways. Look, I know something that will cheer You up. Let’s head over to that one church where the little kids are actually reciting actual scriptures. You know? The “fanatic” churches? I think You might like that.”

“You mean the one where they actually mention the book, the chapter AND the verse?” Jesus mulls over it. “I dunno…”

“Sigh…okay,” says Jesus. “You talked me into it. Should I soop up the chariot with the white horses?”

“Nah Man! I’m the Holy Spirit. I’ll have us there in a twinkling of an eye!”

And off they go; down to see the little kids – the offspring of tyrannical, fanatical parents, who won’t let their kids gather Easter eggs and insist they learn some Bible basics.

Genesis is a BOOK, not the name brand of a tennis shoe.

Black Is King and We All Squabbling Like Peasants

Cousins: The Culinary Verzuz We All Deserve

The Thrill and Difficulty of Decolonizing my Family’s Diet