Have you ever sat back and considered what we used to consider “hard” – like really taken the time to consider the images that strike fear and unease in us as the human race? I’ve watched the evolution of thuggery with some amusement, as some periods in the thug life cycle have proven themselves to be a massive FAIL.

For instance, in the 18th century, a pirate was the scariest dude on the high seas.  Look at him. Doesn’t he frighten you with his gayness? Like he’d rape you and then rob you for your money.

Then there’s THIS guy. A gangster from the 70s. I mean, who takes time to get dressed up in a 3-piece suit before heading out for an afternoon of extorting money and shooting civilians?

In the 80s EVERYTHING went wrong. This is Laurence Fishburne in the Charles Bronson flick Death Wish II. Pink sunglasses? Really? But in the 80s, a guy in a cut-off, navel baring sweatshirt and a bandana spelt Trouble. 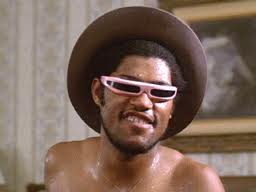 Have a gander at Ice-T in his tight tee and tight jeans. Those are the roots of gangsta rap. *Shudder*

Michael Jackson didn’t improve things either on the cover of Bad. But boy, weren’t we all shocked when he transformed himself from a clean cut, trouser wearing crooner to a leather clad badass screecher.  Whooo! Even my husband has vivid recollection of being somewhat scared of Michael Jackson and questioning why he had become a “bad guy”.

Come on! LOOK at him!

I wonder what thuggery will look like in the year 3000?

How A Kulula Flight Inspired Me to Rethink Aging

Everything I’ve Come to Love About Makeup, I Learned From Sephora

‘Niggerati Manor’ Is The Period Drama We’re All Ready For