Marshall and I celebrated our 6th wedding anniversary this weekend, and it was honestly the best anniversary we’ve had – ever.

After I cleaned out the shoe store in my closet, it was abruptly time to head to a marriage conference that was coincidentally happening the same weekend as our anniversary. I had been working so hard that I had let time get away from me, and we had to leave before I had time to freshen up. As I nestled into the front seat of Marshall’s car, I got a whiff of steam from betwixt my clammy legs.

“I smell like sweat and oppression,” I said to Marshall. “Do you smell that?”

I fanned my crotch in his direction.

“Nope. I don’t smell anything,” he said. “Besides, I have something for that later.”

A combined 850 sweaty pounds rolling around on hotel sheets is not going to make me smell better, I thought.

Caroline had graciously offered to watch the kids Friday night, and Marshall had arranged a surprise for our iron year anniversary. We had already planned to stay at a hotel for the evening and get up early for the second part of the conference, so I wondered what the “surprise” could be. I’d have to wait to find out.

The marriage conference was amazing, with loads of really good advice (some that I found I would have to use sooner than I contended with). Unlike other events at our church, this one actually ended at a decent hour. There was still time left in the evening to do something. As it turned out, Marshall had gotten us a room at the Crowne Plaza Ravinia – a hotel I’ve been waiting to have the occasion to stay at for the last 11 years. 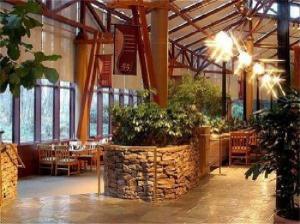 I was like a squealing villager in the big city. The air was cleaner, the lights were welcoming…I mean it was just nice. It was hard for me to stop grinning. When Marshall opened the door to our suite, there were roses and rose petals all over the place. How romantic! Not one to miss an opportunity to ruin an otherwise passionate mood, I exclaimed:

Marshall rolled his eyes and shook his head in disbelief, while I stood in the walk-way, eternally pleased with my quick wit.  He walked me to the bathroom and showed me my surprise – a bubble bath. In a tub large enough to accommodate my enormous frame. Oh wow, what a gift! I soaked until I was prune-y…no kids, no screaming, no rushing…it was brilliant. We exchanged symbolic gifts for our 6th year:. He gave me a flat iron; I gave him a copy of Iron Man 2.

The whole scene was very reminiscent of our wedding night, except we were both at least 20 lbs heavier and had earned a few more grey hairs and 6 years worth of wrinkles. Also, unlike our wedding night, I made no attempts at sex appeal or feigning anything resembling demure. Six years of marriage have morphed me into a horribly pragmatic woman, leading me to seduce him with the following statement:

Isn’t he a lucky guy?