Yesterday I was trolling Yahoo News and discovered that Dakar has its own fashion week! The organizer of the annual event is privately organized by model-turned-designer, Adama Paris. The event is in its ninth year and if I’m so fortunate, I plan to attend the 10th showing in 2012. Young Africans are returning to their countries of birth or national origins in trickles, but the impact that they are having on culture and commerce is immediate and widely felt. (I will as always, shamelessly plug my BFFFL Nana Darkoa who is a force in this new vanguard.) 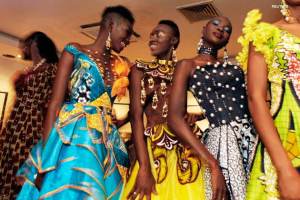 After centuries of colonialism and decades of post-independence war and in-fighting, it seems that Africa may finally be coming back into its own through needlework, keystrokes and mic checks. Africa’s glorious and vibrant music and fashion heritage is being revived in a modern day renaissance that beats with the pulse of a Kenyan runner.

Just this past week in Jamestown, my countrymen made an effort to showcase this re-appreciation for this 21st century enlightenment through a street festival dubbed Chale Wote. ‘Chaley wote’ is the local name for flimsy flip-flops that shod the feet of both commoners and aristocrats. It is an essential item in the wardrobe of every African, just as art is essential for the human soul. I believe it was in that spirit that these photos of the event were taken. Nana Kofi Acquah is a photographer with an eye for capturing the moment and skilled at unearthing pictorial gems among the mire. After reading his blog, I was saddened that I had missed such a showcase of local fledgling talent.

And then I saw THIS ‘analysis’, which also angered me  The writer makes the insipid assertion and the unmitigated assumption that the poor are somehow less worthy of feting this renaissance…simply because they’re poor. What business do embassies have funding a street fair in sprawling slum such as Jamestown, when they need rice for their bellies, she pondered. To make matters worse, the ‘poor woman’ had to endure the dusty hands of little nigger children as they crowded around her in welcome. I was at a loss for words, until one blogger aptly summed up her inane utterances.

“We are more than the contents of our bellies, or in this case, the absence thereof,” said Kobby Graham in a tweet.

We are three part beings, you and I: spirit, soul and body. It is just as damaging to ignore the feeding of your soul as it is to neglect the nourishment of one’s body. One simply cannot live off rice and United Nations nutrient mush eternally as Holli rambles in her article. Africa and Africans are far more than the contents of our bellies.

There is a new scramble for Africa, and the nations are coming once again to spoil and divvy up our lands and resources; and China is at the forefront. But I have hope that through this new awakening and appreciation of self, we can quell that onslaught, if even for a little while. We must rebuff the attitudes that seek to lower us to a nation of charity cases and embrace the beauty in the muck.

No one said Africa is perfect. It may be a mess, but it’s a beautiful mess.

Black Is Beautiful, But THIS Black Terrifies Me