The next morning Serena and Annabelle encountered Anitha at the dining room table as the child was leaving for school.

“Mommy has been very lazy,” she moaned to her daughter. “I have so much to do and so little time to do it! Mommy has to clean the carriage house.”

She let her eyes lift up to Annabelle who quickly averted hers.

Anitha had a tenant moving into her carriage house on December first. It just so happened that the date of this conversation between mother and daughter was November 30th. How much time did she have to clean these accommodations, you ask? Oh, a mere three weeks – which was how much time had lapsed between the time the tenant had signed the rental agreement to date.

“Annabelle! I need you to go to IKEA and pick up some screws. I have to fix some of the furniture in there,” she commanded. “You can get them after you drop Serena at ballet. Today is a busy day you know!”

Annabelle froze. Ballet class was all the way in Cobb county. IKEA was downtown. At that hour, traffic would be impossible. How could she make this woman see the folly of her suggestion? She tried reasoning with her.

“Anitha, how do you suggest I do this? The traffic at 5 is awful, and I don’t know that I can pick Serena up from ballet in time.”

She paused to allow the woman to map it out in her head. A few minutes later, she came back with a brighter idea.

“You know, I’ve been thinking about it. We really don’t want Serena out in this cold, so why don’t you just pick up the screws as soon as you drop her off. That should work better.”

She went back to eating her fruit salad.

Annabelle was in disbelief. As Anitha had just got finished saying, Wednesday was indeed a busy day. She had to pick Serena up at 11:30 am for a half day of school, and this woman was sending her to IKEA at 8:30 am during the worst traffic of the day! Annabelle felt steam coming out of her ears. How lazy, how inconsiderate! Anitha had 5 days during her holiday to do this on her own, and she had deliberately waited until Annabelle returned to run her around. She felt her blood pressure rise as she jumped into the driver seat. But then she had an epiphany. Why would she run herself ragged at this woman’s convenience? She would go to Starbuck’s, get a Grande macchiato, turn on some tunes and wade through the traffic. Screw Anitha. If she was late, she would be LATE.

When she arrived at IKEA, she handed the screw sample that Anitha had given her to an associate and looked at him without expectation. She was greeted with some interesting news.

“We need the SKU number for this screw,” the clerk said. “And we don’t keep them in house. They’ll have to be ordered.”

Annabelle laughed, thanked the man, and left.  Anitha, on the other hand, was less amused with this information.

“IKEA’s just different,” Annabelle reasoned. “They get new stock in all the time, besides.”

“Well it shouldn’t be that way,” Anitha sulked. She looked around the room and zeroed in on the fern that Annabelle had brought in a week before.

“Hey, we really need to repot that plant.”

“I’m going to need your help with that Anitha. It’s a really big plant!” Annabelle objected.

“Anitha. This plant is still in its original temporary pot. The roots have adhered to the plastic. I’ve already tried pulling it out.”

Anitha looked at Annabelle in disgust.

She reached into the pot and gave the trunk a tug. It didn’t budge.

“Where are your shears, Anitha?”

“They’re in the garage.”

“No they aren’t. I already looked.”

Anitha turned on her heel and went out to the carriage house to begin cleaning up. The family’s bedding, bath towels and other accoutrements were all still in there, and all though the place was being rented furnished, the tenant did not want (or need) the family’s linens.

Annabelle left to ferry Serena around for her afternoon activities. She had to be back by 4:30 pm so that Serena could have her dinner.

When she got to the playground, one of the other nannies waved at her. The two of them had spoken casually a few times before, and it was good to see a somewhat familiar face.

“How ya doing today?” asked the woman with a slight Southern twang. She had her arms folded to guard herself against the crisp fall/winter air. (We don’t have distinguishable seasons in Atlanta.)

“I gotta tell you. When we first saw who you got out of the car with, me and the other nannies took bets to see how long you would last.”

“Yeah, the last nanny had a rough time.”

“No one knows, but Anitha came to playgroup and told all the parents that she fired her because she was stealing.”

Annabelle looked into the distance. Her thoughts turned to her employer. Given Anitha’s history of misplacing things, she doubted the other woman was stealing at all. Annabelle had just found her and Serena’s passports on the floor by a bookshelf. She shook her head and waited for Serena to emerge, before saying good-bye to the other nanny.

When Annabelle got home, she immediately began to tackle this fern that Anitha had been going on about since the week she started. Her thoughts were still on Anitha, whose credo was to put off till tomorrow what she could do today. That lifestyle would be okay, if it didn’t affect other people to such a severe extent.

It took her an hour to dislodge the plant and repot it. Her back and biceps were arching by the time she was done. As she was clearing away the dead leaves, Anitha walked in and inspected her work.

Not a word of gratitude or thanks. Annabelle was stunned.

“Do you know where the red pot is, Annabelle?”

“I didn’t even know there was a red pot!”

Annabelle stood to her feet. It was 8 pm and she was officially off the clock.

“Wait! Can you to stand by the kitchen door so that I can go out to the carriage house.”

When Annabelle woke the next morning she spoke to God, just as she did every sunrise.

“Thank you for this day, God. It’s going to be a great day.”

The words were uttered halfheartedly, but at least she could make claim to have said words of thanks. When she got into the kitchen, she could not fathom what her eyes beheld. In addition to what she was seeing, she thought she detected the faint scent of stale urine. On the kitchen counter, underneath the microwave and next to the bread box, was a set of damp bathmats from the carriage house. 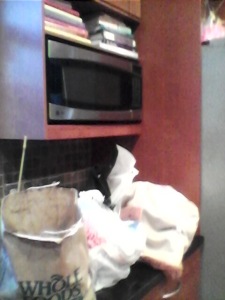 As she turned to exit the kitchen, she was confronted with an enormous heap of bedding, sheets and comforters – on the dining room table.

This was the last straw. This was it!

In order to get to her bedroom, Anitha had no choice but to walk by the laundry room. The house was simply designed that way. The decision to dump the linen and bathmats on the kitchen counters was a deliberate attempt at disrespect, and Anitha had succeeded in totally demeaning Annabelle with this act. Up until now she had comforted herself with referring to herself as a “personal assistant” – a title which she had by no means sought – but there was no denying it now: Anitha thought she was a MAID.

Even in Kenya, my parents didn’t treat our maids this way! She raged inwardly.

Enough was enough. She resigned as of that moment. She carried on with her duties and went to tend to Serena, defiantly leaving all the items where she’d found them.

When Anitha came home later that evening, her displeasure at the sight of the offending items still where she’d left them was clear. She addressed Annabelle without a word of greeting before launching into her attack.

“Did you need to know where to put these, Annabelle?” she said through tight lips, thinly attempting to mask her anger and irritation. Ravi had come home from travelling the last two days, and she was aghast that the kitchen was so unkempt. She glared at Annabelle.

Annabelle could not believe this cow had the nerve to be angry with HER. The very same woman who went on and on about the patients she consistently treats for food poisoning was the very same genius who put urine tinged fabric next to who food in the first place!

“Look Anitha. This isn’t working out. We’re not a good match and I am not a fit for this position,” Annabelle said curtly. “I’m giving my two week notice.”

Anitha did not seem surprised. Evidently, she’d heard these words many, many times before.

She refused to allow Annabelle to elaborate on the reasons why.

“Do you want to leave two weeks from today, or do you want to consider last week as the beginning of your notice.”

For her to have even made the suggestion confirmed the fact.

As politely as she could under the circumstances, Anitha asked Annabelle to place the linens in a suitcase that was in the garage, once they were clean. She went upstairs to inform her husband of Annabelle’s resignation, speaking rapidly and loudly in Hindi. Annabelle walked out to the garage to gather the luggage, nearly stumbling over an enormous red plant pot that had been sitting out in the cold the night before. She lifted her feet a little higher and kept walking.

This family needed someone who was impressed by their wealth and their degrees and their ‘whiteness’, who in turn did not have enough self esteem to know when they were being abused or treated like a slave. Her dignity was worth more than a paltry $200 a week and a roof over her head! She wasn’t sure who that person was, but she was not comprised of that color, whatever the Rajawanis assumed it was.