This morning I woke up bathed in sweat. My mouth was dry as desert sand, and my hair was matted to my face. My racing heart threatened to

burn through my rib cage and beat its last on my cream cotton sheets. Dolvett Quince had come to me in my sleep.

For those of you who are unfamiliar with Dolvett, he is a new trainer on the Biggest Loser. He joined the show last season, and instantly became a new celebrity crush for ordinary people of all walks of life. Old and young; White and Black; gay and straight – we all love Dolvett.

I have made no secret about my admiration for his physique. I once joked that it would be my fondest wish to don a safari suit and rain boots as I hunted for Dolvett in the wild. I would capture him using nothing but a net and my wits, and once he was in my grasp I would mount him on my kitchen table and rub his cheeks every day for good luck as I left the house. Which cheeks would be at my discretion!

Last night, I had three dreams rolled in one. It was Saturday morning and Prince had just brought me pancakes. Before he left the room he sang a special rendition of Adore and bid me farewell until next time. Idris Elba asked me if I could join him for lunch in Buckhead, which I was happy to do. After I had feasted and was ready for a nap, my subconscious took me to thoughts of Dolvett. Much as I admire him, I have never devoted much thought to Dolvett past Tuesday nights. It therefore startled me to discover that he was a major character in my dream.

“Hello, Malaka,” he said in his velvety smooth voice.

“Yes. I understand you’ve been thinking about me. So here I am.”

I drew a sharp breath. Wow. He was hotter in “person” than he was on TV!

“How did I get here?” He chuckled. “All you had to do was send out the energy that you wanted me to be here, and so here I am.”

“Wow. Wow! Oh, okay, well there are few things I would like to see happen,” I began.

“Yes. I know all about the safari suit and the net,” he finished for me. “But Malaka, wouldn’t you like to do something more exciting than that? You know, something that’s going to leave an impression on you forever?”

“With you, Dolvett?” I whispered breathlessly. “Of course!”

He smiled and took my hand.

“Good, good. Because I have so many special things planned for you tonight, Malaka. There are things I’m going to do to your body that you’ve never dreamed of.”

I felt warm and giddy. An involuntary giggle escaped my lips.

“Let’s not waste time, shall we?” I suggested.

“Let’s not indeed,” he said smiling mischievously. His brown eyes twinkled and held my gaze.

In the next breath, he took his mighty man hands and clapped them twice. In the next instant, I was teleported to a treadmill. To my utter shock and horror, the speed was already set to 5.2. I began racing so that I would not fall off and injure myself. When I got some sort of rhythm going, I held onto bars of the treadmill.

“Do NOT touch my treadmill!” he barked.

When I laughed at his signature catch phrase, he glowered at me.

Of course I had no intention of doing this. I was barely able to keep up the pace at 5.2. To my dismay, I discovered that I no longer had control of my dream. Dolvett was holding the reigns and driving this team of horses at full speed. The machine harkened to the sound of his voice and automatically increased to 15. I was now almost perpendicular to the floor.

I nodded, unable to verbally respond.

He took me to a shady tree where there was a stone bench and sat down. I attempted to sit next to him, but he forbade me. When he spoke, it was in a low and confidential voice.

“I understand you’ve had some trauma to your core,” he said compassionately. “How many c-sections have you had?”

This was my cue to begin sobbing, just like the contestants on the show are perpetually doing. I forced my eyes to mist over.

“Four,” I replied. “Four c-sections and four wonderful kids. I don’t regret it at all.”

“Good, good,” he nodded. “Your core muscles have been through a lot, and we need to build them up. Do you like to swim?”

“Do. You. Like. To. Go. Swimming,” he repeated deliberately.

He clapped his massive hands again and we were transported to a lake. The water was bile yellow and violet. The raft we were standing on was only 4 feet wide, and barely big enough to support the two of us. I felt myself get sick.

“In this lake there is a 12 foot crocodile,” began Dolvett. “No one has ever caught him, but he’s caught plenty of other people. You will feel him before you see him. The visibility in this water is about 3 inches. By then it will be too late.”

Where was he going with this?

“You’re probably wondering where I’m going with this,” he continued. “Well, we need to engage your core muscles, and to do that you will have to swim to these 5 buoys, collect the flags from each one, and bring them back to shore…without getting eaten.”

“There’s no frikkin’ way I’m doing that Dolvett!” I shouted over the rushing water. “You might as well push me in.”

I folded my arms in defiance.

Dolvett shoved me with his left palm and launched me into the swirling vortex beneath the raft. I came up for air and began to tread water. I hadn’t done that in 15 years.

“Good luck!” he called, and began to float down river.

At that moment, something brushed up against my sneaker.

If I didn’t drown, I was going to be eaten. I had two options: could fight or flee. I swam harder than I had ever swum before, snatching the flags off the bouys in record time. When I reached the last one, Dolvett magically pulled up beside me in a canoe. He hoisted my exhausted body out of the water and gave me a blanket. I shivered and fell into a heap on the floor of the boat.

I shook my head.

“You asked the Universe to send ME to you, didn’t you? Not Bob, not Jillian…ME. Now you got me, and you say ‘no more’?”

He spat the words and looked at me with contempt. He was a monster, and I wanted him to go away. 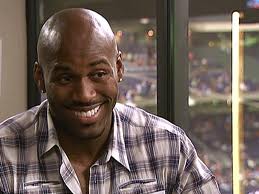 He stood up in the boat and pointed his right index finger to the sky. He looked like a Black Flash Gordon. I could only assume he was about to float away.

“Good bye, Malaka. Next time don’t ask for more than what you can handle.”

He laughed at me as he uttered those words. I so wanted to assault him with some witty rebuttal, but by that point I had lost all control of my bodily functions. I farted and lay lifelessly in the boat, cursing Dolvett in my mind because I was unable to with my mouth.

The sound of the shower woke me up. I wanted to run into the bathroom and thank my husband for saving me. If he weren’t so loud in the mornings, I would have still been trapped in that horrible, horrible dream!

Yes Dolvett, you are fine; But like all fine works of art, I will admire you from a safe distance.

This article has 17 comments