They say that seven is the number for completion, and I have completed had it with Douche Bag.

Have you seen the Unicef commercial with Alyssa Milano?  You know, the one where she is unsmilingly holding up two quarters, urging viewers to give $0.50 a day to save the life of a child? Did you not wince as she virtually spat the words at you, as though you were a cur who had earned no place at the foot of the master’s table?

Did it not make you feel…useless?

Every time that commercial comes on I change the channel because:

But that is not to say that her tactic is not effective. Quite the contrary. Recognizing the power of a frowning face and a direct appeal to guilt, I decided to use it in a campaign to raise funds for my eldest daughter myself. Love clearly has failed and had nothing to do with getting the money needed to care for her.

We have now reached month 7 with no child support from Douche Bag. Nadjah recently turned 7 as well. According to numerology, 7 is a powerful number, and I aim to get some power back!

As you longtime Readers know, Douche Bag is suffering from type 1.5 diabetes (because NO doctor in the Metro area is qualified enough to ascertain for certain whether her has type 2 or type 2) and his ‘illness’ has prevented him from holding a steady job for the last 7 years. In that time I have done what any mother needs to do to care for her child, and my husband has largely covered Douche Bag’s slack. I have been fortunate not to have truly needed his financial assistance. I don’t need it now, but my daughter does deserve it.

Or does she really?

Are there any fathers reading this blog today? What say you? Does your child born out of wedlock or not, deserve your financial support? Tell me honestly, because I (and many other women reading) would like to know.

Douche Bag owes thousands of dollars in back child support, and in 7 years he has only provided $4301.19  (which is incidentally not divisible by 7, and therefore kinds of screws up my numerology game) in accounted for funds.  Knowing him as I do, I understand that he neither possesses the aptitude for responsibility nor the ethic needed to maintain long term employment. Therefore, I gave him a carrot – a way to show some initiative, albeit far beneath what is required from a “father”.

I asked him to pay $20 a month if he cannot afford his entire payment at this time. His response stunned me.

Something is about to fall threw [sic] really soon. Just crossing my fingers. The temp job expired.

I’ll spare you the details of the remainder of the text conversation, but after 4 responses and a flurry of excuses, I finally broke it down Alyssa Milano style.

You live in a 3 bedroom house. You drive a Tahoe. I find it difficult to believe that you cannot spare $20 a month for your own child.

The shame of that statement stopped his torrent of defenses. He conceded he could spare $20 (or 65 cents a day) and that he would give it to me when he next saw me. I asked him to mail it to the state instead.

But Readers, must it come to this? If you have a child, or intend to have one in the future, would you not do everything in your power to make sure they were cared for? Is your child not worth a few shiny coins a day? Even children in rural Africa get more than that for feeding. Plumpidoze ain’t cheap you know!

I eventually did get some money from him, and have begun to send him pictures of bills for field trips, school uniform costs, Girl Scout camping trips, Kleenex if she sneezes and needs to blow her nose. This is the image for the ad I would like to use for my Pay Me My Child Support You Frikkin’ Deadbeat! campaign. Do you like it?

I think Ms. Milano would be proud. 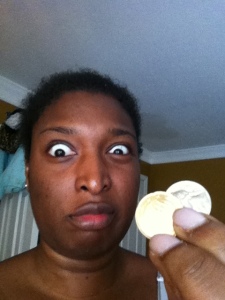 I’m Co-Parenting with an Inherently Violent Man. I’m Fearful of the Repercussions for My Child.