Everyone else is doing a post about Valentine’s Day, so why not me too?

The sky was dark and overcast in Atlanta on February 14th. The forecast had called for snow, but there was only snow in the mountains. The rest of the city was merely cloaked in a dreary gloom with neither rain nor a threatening mist to show for it. What was the point in a cloudy sky if there was no precipitation to follow? But then again, what was the point in Valentine’s Day?

Malaka Grant pulled her rotund frame from her queen-sized bed and padded to the bathroom to brush her teeth. She had 30 minutes to get her kids dressed, fed and off to school, just as she did every morning. Her second born came rolling down the stairs first, angry as always that she’d been forced from her bed in order to be sent to school.

Aya sneered at her mother and asked if the toast was ready. Then she sat down at the breakfast table to wait to be served. Nadjah was a bit more cordial.

Valentine’s day never came without some level of anxiety for Malaka. In principle, she hated the day as a superficial commercial celebration that made an abject mockery of love, but in reality she did like to receive chocolate (and recently only of the Fair Trade fare) and the devoted attentions of her loved ones. Still, because she had made such a stink about it on her blog, she was forced to say bah humbug to it all.

But then there was her husband, who was a hopeless romantic and would be expecting a gift.

After the bigger kids had been shuttled off to school, she turned her attention to the younger two.

“Well guys, I have to go get your father a Valentine’s Day gift, which means I have to leave you with the sitter.”

The ‘babies’ ages 2 and 1 wailed their protest. They knew that if there mother had put on her boots and thrown that shiny stuff on her lips, she was leaving the house. They also knew that if they didn’t have THEIR shoes on, she was leaving without them. She dodged  the sippy-cup full of milk that the youngest was flinging at her head in disgust and made a beeline for the door.

By now it was 10:30 am. She had just enough time to make it to the mall to buy a gift and meet her husband for lunch. The only thing she hated more than Valentine’s Day was the mall, but sadly there was nothing to be done for it. She had to pick up something.

As she drove down the freeway, it occurred to her that she might garner the perfect gift: A bottle of cologne. Men loved cologne, didn’t they? And women loved the way men smelled when spritzed with the appropriate amount. Pleased that she had conjured up a gift idea so quickly, she turned on the radio to set the mood for the afternoon’s pleasantries.

“I’d rather a girl get me a bouquet of flowers than to get another bottle of cologne for Valentine’s Day.”

The 20-something radio jock was going on and on about how cologne was such a cliché gift and launched into an all out assault on the thoughtlessness of the gift. How was Malaka to know this? She hadn’t purchased anything for her husband in years. Well, maybe if she gave him some cologne and some booty…Everything is better when you sprinkle some booty on it. She changed the channel and decided that these two combined would be enough.

When she reached the mall, she amused to see gaggles of men scurrying in to purchase last minute gifts. At the Kroger across the street it seemed as though the same man dressed in Dockers and a sport coat ran in and out of the electronic doors with a bundle of flowers at least 6 times. The only thing that changed about him was his face and the direction of his comb over.

In the aisle leading into the mall was a perfume kiosk, manned by a young dark skinned Indian man. He pulled out his earphones just as Malaka approached his stall.

“How can I help you today?” he grinned.

“I’m looking for a cologne for my husband,” she said.

“Ah. I see. Did you need help choosing one or did you have one in mind?”

“A nice choice,” he nodded in approval.

He produced a can that was hidden behind the rest of his wares.

“Is this a good valentine’s day gift?” she asked, hoping he would approve.

“Oh. I dunno,” said the young man as he rang up her purchase.

How insensitive of me. He probably doesn’t celebrate Valentine’s Day, she thought.

“Ah. What do you mean you don’t know?” she asked aloud. She was baffled by his response.

“Well, I broke up with two girls within the last month,” said the man laughing mischievously.

“Eh?” Now Malaka was really confused. Was this goofy kid trying to say he was a player. “You mean you were dating two girls…at the same time?”
“That’s right!” said the Indian man chuckling hysterically. His brown eyes danced with delight at the memory.

“Well it sounds to me like they found out about each other and broke up with YOU.”

“Maybe…but I have a new girl I am talking to. I hope she’ll go with me,” he confessed.

Malaka did not share his sentiment, but thanked him for the purchase and wished him well.

“Just remember what they say about straddling two horses at the same time,” she added.

“I have no idea, but I imagine it would hurt your balls.”

He laughed again and put her gift in a black plastic bag, similar to the ones given out in a West African market.

“Don’t you have any gift bags?”

“Then this is why those two girls broke up with you,” she concluded.

“Because I don’t have gift bags?” he asked, chuckling in disbelief.

“You’re welcome. I hope to see you again soon!”

They smiled at each other and Malaka went in search of a gift bag. Fortunately, there was a Spencer’s just at the exit door of the mall, which meant she did not have to go in search of a Hallmark store.

The gift bag selection was wildly inappropriate for the occasion.

Somehow, she didn’t think her husband would care for any of these. She settled on one that was the least offensive.

By now it was time to meet her hubby for their noonday rendezvous. Unbeknownst to her, he had been tracking her every move on his iPhone. They had synched their devices so that they could check up on each other without having to call to verify the other’s whereabouts. Some people might call that “stalking” but they preferred to think of it as “convenient.”

He walked into the restaurant within minutes after she did.

As he sat, she turned his attention to a young man who was sitting alone at his table waiting for his date.

“It would be so cliché, but I wonder if he’ll propose to her this afternoon. I’ve never seen a proposal in a restaurant.”

“That would be funny,” he mocked. Maybe he wasn’t as “romantic” as she had assumed.

Everything was going so well. The Thai restaurant where they were eating had curry lamb as the special of the day and the staff was uncommonly pleasant. Love was truly in the air. Neither Malaka nor her husband seemed to mind when two couples who sat down after them got their food before they did. They were each consumed with the presence of the other, making fun of their poor table manners. Malaka finally produced her gift with gusto, which her husband looked at with some level of disappointment.

“I already have this.”

“I guess because the spray part of it is broken,” he confessed.

She noticed that he was hiding the gift bag she had purchased, as though he were ashamed of its exterior. 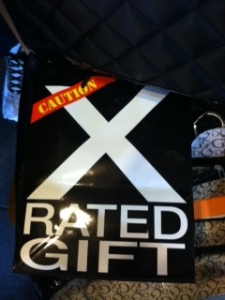 “I went to a great deal of trouble picking out this bag. More than you’ll ever know!”

“Malaka, I can’t walk around with this bag,” he pleaded.

She took it and put it her purse with a huff. He smiled in gratitude.

“Well, since we’re in the spirit of clichés, I have something for you.”

He whipped out two bars of chocolate and a card decorated in gold foil. She eyed the chocolate suspiciously.

“I made one last stop and found it at Cost World Market.” 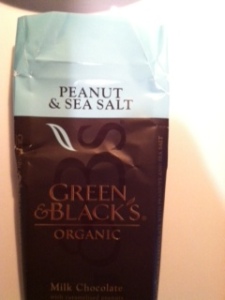 She took a nibble of the dark, semi-sweet substance. Love had never before tasted so sweet…and so salty. Who laces chocolate with sea salt?!? Still, she could eat this chocolate without guilt. (You hear that RAVEN? There’s no blood in this bar of chocolate!)

Dare she say it? She dared indeed. Happy Valentine’s Day, one and all.