After making so much progress, my son has reverted and returned to taking a dump in his diaper. This may not sound like a big deal to you, but when you consider that he is a 36 lbs individual who consumes portions of food fit for boys 3 times his age, you can imagine that he makes a very impressive dirty diaper.

For about a week he would dutifully inform us that he had to the potty, and we were thrilled. Suddenly, his cordial announcements of “I go poo-poo in de pottie!” ceased, only to be replaced with a silent – and pungent – advertisement by way of his soiled pants.  Our attempts to get him to conform to his old habits were stubbornly rebuffed. I can only surmise that this was for two reasons:

1)      There was no profit in it for him, since he did not get a reward for going to the toile ton his own and

2)      He had no choice but to create his own reward system by punishing me. I have caught him grinning and giggling on more than one occasion when I have had to splay his legs to clean up the massacre.

Desperate to find a solution, I have wracked my brains to devise a way to make him WANT to go to the bathroom on his own accord. I know that calling my parents or anyone of that generation is futile. I don’t remember being potty trained, but I can imagine that the secret of my success was motivated by not getting my a** whipped. An a** whipping is the go to solution for anyone over the age of 60 when it comes to child rearing. Child won’t eat? Whip his a**. Child won’t come here when you tell him to? Whip his a**. Child won’t tell you when he has to go poop? Whip his a**! The promise of/fear of  pain is probably a good temporary motivator, but I’m a “new age” mom who doesn’t care for this particular “old school” tactic.

I have given it a lot of thought. Like many things in this modern age, I believe technology can serve us greatly in this area.  There should be a potty training app. Why not? There’s an app for everything else! Here’s what I think might work for my Stonie.

I propose the creation of an app based on your child’s favorite characters. Stone, like many boys under the age of 5, is highly partial to Cars and Thomas the Train. He also likes dinosaurs, but I don’t think pterodactyls and T-rexes have any place in the toilet.

So, you place the child on the toilet first thing in the morning and put an iPhone/iPad/iWhatever in their hands. You click on the app and wait.

“Hey buddy! It’s time to use the potty!” chortles Lightning McQueen. “Why don’t you go ahead and take a piss in my Piston Cup?”

The child giggles. It WOULD be fun to pee in something so shiny and apparently valuable.

“Go on! You can do it. Here, let me show you how it’s done,” urges Lightning. The animated hotrod then begins to simulate the sound of water trickling into the toilet, and just like that, your two year old is peeing in the toilet! Anticipating your child’s success, Lightning whops a congratulatory “KACHOW!”

There has been no screaming, no crying, no bribing and everyone is happy.

Now that’s the easy part is out of the way, it’s time bring out your big guns. Thomas, who is described on his show as the “cheeky one” on his show Thomas & Friends, instructs your child on the fine mechanics of loading and offloading…his poop, obviously. 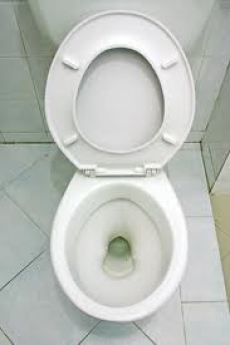 I for one know that this terminology would resonate with Stone, because my son has actually referred to the toilet trap as a “tunnel” – a tunnel that he has fished several items from.  I believe the key is to engage the child’s imagination. If you can get your child to picture himself succeeding at what you’re asking him to do, then you can get him to do anything! Is that not the way it works in our adult lives too?

The other option is to let him walk around with his pants full of poo, but as you can imagine, that has more negative consequences for me than it does for him. At the end of the day, I still have to do the laundry.

I know there are developers out there with kids reading this right now. This is possible, isn’t it? Then why haven’t you done it yet?!? It’s because you don’t care. Only a parent or someone who spends their days knee deep in poo would understand. This is a sincere cry for help. Answer it!