All I wanted to do was fart; but I couldn’t. We were in sophisticated company and it wouldn’t do to let one rip out there on the elevated terrace of JCT Kitchen in the heart of Midtown. The Garners had invited us out for a birthday celebration, and it was the first big social gathering I had been to in months. The last one was for Mrs. Garner’s bridal shower at Wine Shoe. Somehow, this couple was the only one who had been successful at coaxing me out of my house in semi-formal attire and heels. Ever since the third baby was born, the epitome of my social experiences has been a night at the Cheese Cake Factory, possibly preceded by a movie. I am always in bed by 11pm.

So there I stood, in my belted midnight blue dress and plum snakeskin heels, making twin attempts at small talk and containing the fire in my bowels that threatened to explode at any minute. I appreciated the ambiance of the venue. The crowd was young – no person was older than 38 – and there was a steady stream of rich folk laughter permeating the air. Nearly everyone had shown up in a couple, except for the trio of aggressive-looking single Black women who went over to greet the host with a hug, breasts first. Somehow their tatted necks, sparkly eye shadow and orange tinted coifs made sense against the backdrop of votive candles and potted lemon trees.

I don’t know about my husband, but I felt like an antiquity among this group of newly married and freshly coupled individuals. While our conversation centered around what our fourth child was up to, many of them were carrying on about their new apartments in Buckhead, or some new project they were working on at work, or a Braves game they had just come from. I was boring, and I knew it. Boring and gassy. Oh God.

Not only was my conversation vastly different from these late twenty-something folks, but so was my body language. That could have been attributed to the fact that I had stuffed my feet into unfamiliar heels, but I don’t think that was the case. I watched as most of the girls leaned into the chests and ears of their partners, as if sharing intimacies than no one else should be privy to. This only made me lean in closer.

“You wanna another beer?” asked the husband of one of my old co-workers who was there.

“Sure,” she smiled, her blue eyes twinkling.

What was so intimate about that? Nothing – but somehow he had managed to make the question unquestionably seductive, as though he were asking if she’s like to shag in the presence of all these strangers. I felt dirty and intrusive. Marshall was standing behind me and tapped me on my shoulder.

“Do you want something to drink?” he asked.

It was a simple question, and very direct. There was no sex in it at all.

When he returned I downed it in four gulps. Not only was I gassy, but I was also sweaty and thirsty. Finally when I could take it no more, I said my goodbyes and left with my husband in tow. An hour and a half was a respectable amount of time.

“There’s a full moon,” I explained. “I don’t want to transform into a werewolf and frighten your guests.”

The Garners laughed and we were allowed to leave.

The night was still young, so we decided to grab some desert from Café Intermezzo, which is a premier dating spot in metro Atlanta. My husband is an unabashed romantic, and revels in any opportunity to show physical affection to his wife, especially in public. However, that evening showed me that he wasn’t doing it right.

For starters, he was holding my hand. I noticed that virtually every woman was being led to their destination by her butt. Literally.

“When did guys start guiding women by their butt cheeks?” I asked Marshall.

“Look over there,” I said. “That guy has his hand on her butt, propelling her forward.”

A few more couples passed and I saw a repetition of the same phenomenon.

“And look at him!” I whispered non-too-softly. “His hand is just above her butt, but just barely.”

“Do you want me to start guiding you by your butt cheeks too?” Marshall offered.

Marshall’s hand is enormous- a palm width of about 6 inches- and my butt is expansive. It would be an entirely inappropriate sight.

However I can’t help but wonder if I should present my posterior as a tether by which to be led by. Is being shepherded by the butt cheek the new “in” thing to do? Like sharing milkshakes from two straws in the 50’s was? 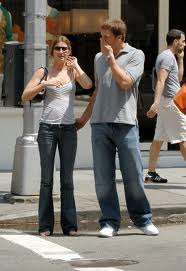 Tom Brady seems to think so.

However given my propensity for gas, it might not be the safest (or sexiest) route for anyone involved. I’m no Gisele Bundchen.