My sister is a person whom one might define as socially awkward. While neither of us possess the gift of tact, I have become slightly more adept a maneuvering unfamiliar social situations, whereas she avoids them wherever and whenever possible. We both have the same handicap: that being that we don’t possess a filter. Whereas most people know that it constitutes poor manners to point out a hanger from a perfect stranger’s nose, we feel it is our civic duty to not only bring attention to the offensive item, but to introduce it to any other would-be spectator and random passersby.

Fortunately in my old age I have learned to bridle my tongue – at least somewhat – and curb my impulse to point out the defects in others, be they friends or strangers. A-Dub has not mastered this skill yet, so she has opted for silence. While my adroitness at this new skill has afforded me with a growing list of new congenial acquaintances, her failure to do so has resulted in an inverse problem. I have to decide how many people I can afford to let into my circle, while she has to decide how many people she can afford to let out. She calls this number an “optimal number of friends.”

While extroverts gather friends in every city and country they travel to, introverts tend to keep the same friends they have known the majority of their life time. Extroverts shop for friends like trinkets, while introverts collect them like treasure. My sister fits in this latter group. That’s why the conversation she had with a friend a few weeks ago put her in somewhat of a quagmire. It was contrary to everything that was part of her nature.

Her friend (we’ll just call her ‘Shequan’) is very fashionable. I’ve seen pictures of Shequan, and she fits nicely into a certain prototype. Being a large, or curvy, Black woman in a major urban area, she has adopted the persona of a ‘diva’ complete with hair extensions and full glam make-up. She is also a regular shopper on an online retailer that makes replicas of celebrity outfits that translate into mainstream life. The sell for this site is that all the garments are true to size, i.e. no matter your bust, waist or hip measurements, if you wear a size 6, you should be able to fit into any size 6 garment on their racks.

Shequan –who is now 7 months pregnant – had purchased a jumpsuit that was replicated after something that Beyonce wore last season. After getting it in the mail and trying it on, Shequan was completely miffed.

“I’m so angry!” she complained to my sister. “I spent a lot of money on that outfit, and it doesn’t fit right.”

My sister was very sympathetic. Being a spend thrift AS WELL as an introvert (I have resisted the urge to call her a hermit and a miser, you should be proud to note), nothing pains her more than seeing money wasted on an item one cannot use. And what is more useless than a dress that you can’t wear?

“I’d send it back,” she said emphatically. “I don’t care how good it looked when you got it out the box.”

Her friend nodded in agreement, disappointment clouding her continence.

“I just feel like I was lied to,” she continued. “This was clearly false advertising. There is NO WAY that this is anybody’s size 12.”

A-Dub bit her lip and choked down the words she so desperately wanted to say next. They tasted like bile as they slid back down her throat.

No, sweetie, they are somebody’s size 12…just not yours.

You see, Shequan is a solid size 20, and incidentally two sizes bigger than yours truly. Yours truly knows better than to kid herself into thinking she has any business sniffing around a size 12 anything – unless it’s 12 scoops of ice-cream. And it’s not that Shequan is some questionable hood rat character – quite the contrary. She is an accomplished Black woman with a degree… she just makes questionable fashion choices.

After Shequan returned the offensive item, she invited my sister to go shopping with her in order to remedy the wrong that had been done to her. She made a beeline for the juniors section, calling for A-Dub to join her over there.

“Naw…I’m just going to go to the misses section,” she said in a way that would encourage Shequan to join her. “They make allowances for women with hips….”

She let her voice trail off. Shequan did not take the bait.

A-Dub just nodded her head and continued her window shopping. What was the point in arguing with this high school student trapped in Grandma’s ample bosomed body? After all, she had an optimal number of friends to keep, and losing Shequan’s camaraderie by telling her she was too fat to be shopping in Juniors’ would upset that delicate balance. 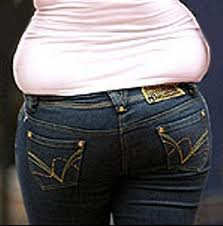 I think she’s being a worse friend my letting this grown woman walk around in too tight booty shorts and low cut tops, but that’s just me. Can you tell your friends the truth? Can you even afford to?? Are you a better friend if you let them wallow in happy ignorance, or pull them out by the crack of their junior sized denim shorts? I’m at Barnes & Noble with my coffee. I can’t wait to hear this!

This article has 25 comments