It’s 3:33pm and I’ve just woken from a lovely one and a half hour nap. The house is silent save for the hum of my ceiling fan and the tapping of my keys. With the advent of back-to-school my afternoons – at least in part – are lazy and I can spend them as I wish. I would say “this is the life”, except I generally spend my mornings dashing around frantically trying to hurry the kids off to school before hurrying off to my job as a housekeeper.

I kiss my kids goodbye and drive off to another unknown family’s unkempt house, fueled by the assurance that those few dollars will in turn fuel my long term goals for my four kids.

Let me be clear: I don’t have to work. My husband makes enough money to cover our basic family needs from groceries to gas. I could never scrub another toilet and never want for another thing. However, he is very frugal with our money, and our ideas of what constitutes a ‘basic need’ are sometimes world apart. It is because of that gulf in ideology that I spend my mornings covered in human hair and pet feces. I believe that participation in after school activities is a basic need. It develops the mind. And so it is my meager income that pays for the children’s extracurricular activities: this year being drama and gymnastics. (And daycare of course. I have to put the younger two in daycare. Stone’s idea of cleaning up a floor is to pour milk on it and then run through the opaque puddle. You could call that art…if you were so inclined.)

Most parents want to give their children better than they ever had, if it is in their power to do so. I personally never got to join anything in school if there was a cost associated with it. I remember I went almost a whole term with no school uniform (which was a basic requirement to go to school!). It was only until the headmaster threatened to expel me that my parents took me to a seamstress to get me kitted for a brown pinafore and beige shirt. I remember how relieved I was to match the rest of the kids! Those feelings are only amplified when you find yourself amidst like people, which is why artists hang with other artists, weed heads befriend stoners and so on. Now that my two eldest girls have discovered personal interests and established unique identities, I want to give them the opportunity to foster their natural talents, and in this day and age that takes money.

Nadjah’s first production this year will be ‘Annie’. I sometimes imagine Nadjah as a Tony Award winner, smiling with giddy delight into the camera and reflecting on the long hard road she’d had to have travelled in order to end up on stage with the likes of Patrick Stewart; assuming he’s around in twelve years.

I pour a little Comet in a brown rimmed tub and begin to scrub.

Then I think about Aya flinging her muscular body weight around the uneven bars and doing floor exercises. By then she will be part of a new vanguard of African-American girls who have thrown off the shackles of cosmopolitan conformity, trapped in overweight bodies for fear of messing up their hair. 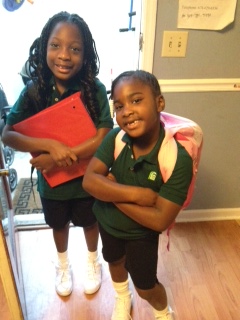 Then I think about all the endorsement deals they might garner and the fine home each of them will live in. Aya, in fact, has already picked out her sleigh bed and told me recently that she WILL live in a much nicer house than the one me and Daddy bought.

I pause to relish in the possibilities of the future.

Suddenly, a dollar figure looms over the imaginary lifestyle I’ve dreamed up for the two of them. It’s in the millions…well over the $250,000 that our government recently set as a standard of ‘wealth’ in this country…and I’m pissed.
Really pissed.

There are days that I question the sanity of working so hard to give my children a better future, when the government – and by that I mean Democrats – convey the message, quite subversively, that my efforts aren’t necessary. Why? Because the rest of the country can just take it from the rich. Ach! How inane, but that’s how a lot of people in this country think.

The MOM Squad knows that I am neither a Democant nor a Teapublican. I believe in hard work and earning your way in this life. I don’t own a business, but I have given a crack at it several times. Owning and running a successful business takes fortitude and an acumen that I do not possess. I am a worker bee, and I’m okay with that. It’s me and other workers that build hives all around the country. So when I hear the honey badger outside of my hive galloping along for his unearned share of my blood sweat and tears, declaring ‘you didn’t build that’, I get pissed. And royally so.

Why in the world am I grossing myself out morning after morning in order to seed into my children’s future? Does it make sense, knowing that at any moment’s time their potential windfall could be squandered by the tentacles of ever rising government taxes and demands for compassion on their part?

“It is our Christian duty to care for the less fortunate,” our president says; and this is true. But caring for the less fortunate also includes giving them job opportunities so that they can create their OWN wealth. I’m not big on this parceling out kettles of fish so that I can fulfill president Obama’s idea of Christian duty. There are thousands of homes in this city in need of cleaning. Neither to poor nor the rich need a degree to that job.

Why should the sweat of my brow go to feed another able bodied woman’s child, simply because she wants to sit at home and watch Jeremy Kyle and Jerry all afternoon? Does it make sense for me to puch my children to be the best that they can, so that they can grow up to support her kids and grandkids as well? What am I supposed to tell me kids?

I dunno. You tell me.

This rant was brought to you courtesy of MSNBC, the Democratic Party’s bullhorn and bully pulpit, who woke me up with their special brand of brewed crap. Instead of asking President Obama what he can do about bettering this economy, they’d rather bitch about Paul Ryan. Paul Ryan??  C’mon people.

The only thing that gives me comfort is that even if Mitt Romney chose Jesus Christ as his running mate, Democrats would still have something to kvetch about.

“Jesus Christ? You mean that guy who thinks He’s the Son of God?”

“The Republicans are going to have a hard time selling this one to the American people.”

“You know, I heard that guy Jesus once pushed granny out the window.”

“Wait. Didn’t He try to heal her? I heard there was a pool of healing water underneath it.”

“Yeah…but that’s not point. He pushed her. Jesus Christ folks. YOU decide.”

*Fix the economy and stop setting stupid ceilings for wealth and achievement in this country!*

You’re Dating a Man Who Cannot Afford to Pay His Child Support. Should You Pay it For Him?

My Preemie is Applying for Her First Job. How Did We Get Here So Fast?