I am a big fan of prison. I think it’s wonderful that we can have a place to send people who rape, maim and rob other people. The original purpose of sending people to the penitentiary was to provide them with a place to do penance for their transgressions. There were supposed to repent and come out better individuals than they were before. Perhaps they could learn a trade, or get an education…something to prove that they were not just throw away members of society. Somewhere along the line, however, something went horribly wrong in the prison system – and now we’re churning out more violent and cunning ex-offenders than ever before.

As anyone in minority and impoverished communities can tell you, the broader effects of repatriated ex-cons is far reaching. Black women so desperate for companionship readily welcome men who have had homosexual relationships in prison into their beds, and are so fearful of losing a mate –ANY mate – that they refuse to have their HIV/AIDS status checked for fear that they will run them off. Many of these men have failed to learn coping skills for the offenses that landed them in prison in the first place, and many of them re-offend. I have yet to hear of a rehabilitated drug dealer. And worst (yes WORST!) of all is the influx of prison fashion that has become so pervasive in mainstream society and the collective global consciousness.

It is a well established fact that Black fashion eventually becomes mainstream fashion. Many well established trends started in the ‘hood many years ago. Hoop earrings, tucking jeans into boots and most notoriously, low sagging pants were introduced to the broader American landscape by youth in urban centers all across the country. There is one cringe-worthy trend that I have not yet ascertained who to attribute to, and that is the low-rise jean with a thong peeking over the top …something fashion guru Clinton Kelley has referred to as “the race to the crack.” I can only assume this trend began in some seedy strip club somewhere.

I haven’t given much pause to Black fashion in recent years because I’m at a stage in my life where I cannot devote much time and/or resources to indulge in my style sense, despite the fact that I work in retail. And it was there, at my job at the shoe store, that the matter was thrust into my face with such coarse vulgarity that it has still left me smarting, 2 days later.

I was arranging some shoes in the men’s section of the store when a woman in a black jacket and herringbone pencil skirt approached me. Her silver earrings shook as she addressed me.

“Excuse me, miss,” she said curtly.

“Those shoes you have in your hand…are those house shoes or shoes to be worn outside?” 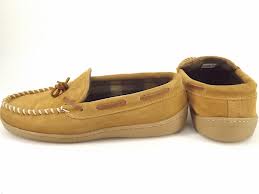 “These?” I asked, holding up a pair of brown Nunn Bush moccasins. “These are house shoes.”

She whipped her head around and threw her hands up at a pudgy, despondent looking young man just a few feet away from her.

He frowned his face and poked out his lips. He might have been about 14 years old, and looked completely ridiculous standing there sulking as large as he was.
She turned her focus to me.

“He wants to wear these to school,” she scoffed.

Anger suddenly boiled up within me. I spoke before I had a chance to funnel my words through my political correct filter. (What PC filter, you ask?)

“No,” I snapped. “Look, I don’t even know you, but I can’t allow you to wear these to school. These are HOUSE SHOES.”

“Exactly!” his mother chimed in. “They’re to be worn in front of the TV with your feet up.”

“And the furthest you should go in these is your driveway,” I concluded.

We both glared at him; two assertive Black women Hell-bent on saving this young man from ruining his life. Can you imagine the utter ridicule he would face when his classmates discovered he was wearing house shoes to school? What would his teachers think?

“What about if I wore them with tall socks…” he kvetched.

“It doesn’t matter what socks you wear them with – they’re house shoes!” his mother exclaimed incredulously.

The young man then began to babble on about how he realizes these moccasins were the direction that he wants to take his fashion sense and that they best define him. His mother cut him off, asking him who was influencing this “realization.”

“You didn’t come up with this all on your own, did you?” she challenged.

The pudgy boy’s eyes flashed. His mouth began to froth at the corners. I could barely stand to look at him, he was such a disappointment.

“So this is what you think this is all about?” he screamed (like a little beeyotch).

“You think I’m just copying someone?!?! And what makes these shoes house shoes anyway?”

The last question was pointed at me. I held up the shoe and pointed out the obvious.

“These shoes have no support in them. These is little to no tread on the bottom and the sole is very thin. They are not meant for outdoor terrain.”

“And you can’t run and play in these shoes,” pointed out his mother. “You can’t play basketball or anything in them.”

Somehow, I doubted that playing basketball was part of his list of concerns. At best his thumbs and index fingers got the most exercise. His next objection simultaneously broke and reinforced my disparaging thoughts about him.

“The floor at school is all tile,” he stated matter-of-factly.

Well then, there you have it. “Tile floor” is a synonym for “kitchen floor”, no matter the geographic location. What an petulant little douche.

Just then, two young men walked by into the clearance section where we were having our contentious discussion. The boy’s face lit up. 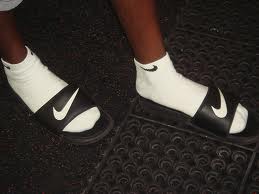 His mother and I looked in the direction he was pointing at. I felt ill. I thought she was about to lose it altogether.

“Dude, seriously?” I asked incredulously. “Do you even know where that style came from? It came from prison!”

that was his name), you know I was a prosecutor. Those are the types of shoes they would hive the prisoners so that they couldn’t form a weapon with the laces.”

As she continued to explain why inmates were only issued plastic shoes and so forth, Cordell looked away with a pained, annoyed look on his face. I despise petulant teenagers. I scowled at him. This knuckle head was going to ruin his life and didn’t even have sense enough to listen to a former prosecutor who has the gumption to steer him the right way!

“Look dude, the best I can offer you is some Wallabees,” I said with finality. I pointed them out on the rack.
“These ugly things?” he snarled loudly.

I was done. I wasn’t the one trying to wear my bathrobe to chemistry class.

Fortunately, I got called up to the registered and I formally excused myself. I assume they left without the house shoes, because the same number of units was on the rack when I went back to my section.

As I do with most things concerning young Black men, I asked Marshall what he would do if Stone wanted do something similarly questionable with his clothing. I don’t even remember what he said because I was internally seething over the idea of Stone walking around the city with his pants dragging around his ankles in tall dress socks and flip flops. I’m raising a gentleman, not a wannabe mental patient!

“What would you do?” Marshall murmured in the darkness.
“I’d beat his ass!” I shouted loudly.
“Wow…”

(Marshall doesn’t approve of cursing, but my emotions had gotten the best of me. I had to be honest…and I would honestly whop his ass.)

It is what it is. When was the last time you heard or saw a CEO of any corporation running around town in tall socks, moccasins and ill-fitting pants muttering “y’knaw whud I’m sayin’?” after every phrase at an investors meeting? O_o

Has anybody else seen this moccasin BS where they live? Is it just a Southern thing? I bet it is. Sweet Jesus in the sky. I bet it started in Maryland. Humph!