When Jamie Foxx was doing the media rounds and promotions for Django Unchained a few months ago, Bill O’Reilly – whom I am a huge fan of – went absolutely berserk when Foxx explained the plot of film.

“But don’t worry,” Foxx said in conclusion. “I get my revenge and kill all the White people.”

The crowd laughed, most likely in response to the obvious absurdity of the very idea.

Bill O’Reilly was not so amused. He called Jamie Foxx’s utterances “despicable” and “racist” and a whole host of other unflattering adjectives. The majority of Americans got it though. Only in a Black man’s wildest pipe dreams would he be able to go on a revenge fueled campaign of carnage directed solely at the powerful white elite and expect to come out unscathed.

As if to prove that very point, enter Chris Dorner…or as he was affectionately known prior to his eminent death, Rambro.

Chris Dorner simultaneously captivated the imagination of the nation and struck terror in the hearts of law enforcement in California. In the unlikely event that you are unaware of who this enigmatic madman was, he was an ex-police officer ( who was described as former military, to ex-CIA, to ex-FBI agent, and finally just ex-cop) and  was fired from the LAPD for misconduct a few years ago. In a 20 page manifesto that he posted online, he swore vengeance against the entire police force, vowing to destroy them and their families, ironically in order to “restore his name”. He made good on his promise and killed six people , including the daughter of the chief who fired him and her fiancé.

The entire state of California went on lock down. For the first time in American history, the government was considering using a drone to locate and destroy an American citizen on American soil. Officials then said it was only a “consideration”. Yeah. Sure. Within hours of that announcement, Dorner was located in a remote cabin in Big Bear, thanks to “eye witness tips”.

The officials went ballistic. They’d got ‘im! Rambro exchange fire with law enforcement before an explosive  device was launched into the cabin where he was holed up. All firefighting efforts were kept at bay, in an effort to either burn him alive or force him out of the cabin, presumably to shoot him dead. Either way, the scenario had to come to an end before nightfall, officials said emphatically.

It’s easy to understand why. After all, it’s difficult to find anything in the dark…and you certainly don’t want to exchange fire with an armed man who has the advantage of the cover of darkness. This was easy to understand for everyone but Anderson Cooper, who stunned the world with this asinine question:

“Is it more difficult to find Black people in the dark?”

Yes. He actually said that on the air, and paid for it too. Jim Crow was not that long ago. There are certain questions White people just aren’t allowed to ask. Like ever.

Rambro – who went out in a literal blaze of glory – is now presumed dead; and in other Black History news, President Obama gave his first State of The Union address on the same night he died.  I couldn’t tell you what he said, because I’m certain it was all rehashed nonsense.

Have you had a McDonkey Today?

“Good morning! Welcome to McDonald’s. Can I tempt you with a biscuit and ass sandwich?”

“An ass breakfast sandwich. We call it the McDonkey.”

“Because all of our sausage meat has a little bit of donkey in it…80% to be precise.”

Does that make you want to gag? Well it ought to. Apparently there are a number of pubs and restaurants across Europe who have been unwittingly serving horse meat burgers to their patrons. Go ahead and let that sink in. Americans have little way of (or interest in) tracing what happens to their food from slaughter house to plate. Don’t be surprised if you find yourself gobbling down on an Eeyore Special at one of your favorite restaurants in the not so distant future.

Protecting and Serving Those who Slang Crack

This was a personal favorite of mine. Ten Atlanta police officers were arrested this week for taking bribes from drug dealers in exchange for their protection.

One of these individuals was a MARTA police officer, which at first glance seems baffling, but when you consider that the most efficient way to do a drug deal is on a moving train, it makes perfect sense. In case you were wondering, they were all African-American, with the exception of one Hispanic officer. 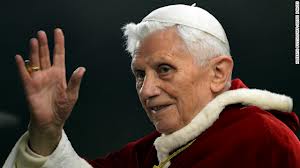 Oh. And the Pope resigned. I can’t say that I blame him. What with the Zombie Apocalypse out in Minnesota, I wouldn’t want to deal with this foolishness either. The world has officially gone mad!

MOM Squad – what captivated you this week where you live? What did I miss?