Greetings from windy South Africa! I’ve been on the road and in the air since May 25th and I’m ever so grateful to have my feet on the ground.

The last time the family went to South Africa I believed it was the most grueling experience I would ever endure. Seventeen hours in the air with four listless kids in economy class was the worst form of agony I had ever suffered through in my adult life. That time I had a 3 day bout of diarrhea when I was 25 is a close second.   But they say if you think life is hard now, live a little more. 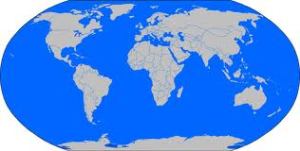 As bad as traveling with the kids was that year, this trip was incredulously arduous. Every, including myself, keeps saying we need to be grateful that at least we didn’t have to haul 4 children across 4 time zones for 5 days, but that was little comfort for my aching brain and sore back. We began our vacation by driving 8 hours to Ohio to drop the kids off, then 8 hours back to Atlanta the next morning. I went to work on Monday morning put in 4 hours because I couldn’t pass up the opportunity to make some extra money. Then we got on a plane at 3:30 and flew to Houston. 4 hours later we flew out of Houston and took a ten and a half hour flight to Germany, where we had an eleven hour layover. That night, we took yet another ten hour flight to Johannesburg where we hung around the airport for 2 hours before we took an hour and a half flight to George and then an hour drive to Plett where I hopped into the shower and went dead to the world. Do you follow?

How did I get through this ordeal, you ask? To divert my thoughts form the physical pain I found myself in, I focused on the supporting cast and extras milling and running about in the airport and on country highways instead of how long it was going to take us to get where we were going. I made a number of profound discoveries through my observations.

The first of these was that it is perfectly alright NOT to talk to your seat mate.

I heard people say incredibly stupid things to perfect strangers in the airplane. I wish people understood that even though they guy or the gal sitting next to you may care how recently you were divorced and what your ex-husband is doing with the 22 year old tramp he left you for in Amsterdam, the rest of us on the flight don’t really care! To boot, it may behoove you to notice that the hot guy that you’re whining about your failed marriage (and by extension your whole life) is smiling tolerantly and not encouragingly. Know the difference!

The second was that airlines have discovered a new and devious way of extracting money from would-be travelers through the coveted exit aisle.

Once upon a time, you could request a seat in the exit row from your travel agent or the airline on a first come, first served basis and still pay regular economy fare with the benefit of extra leg room. Now, the airlines charge you an extra $30 – 100 per ticket to sit in the exit row by labeling it “economy plus”. I will never pay extra money for economy plus. The exit seat is not a luxury seat. It’s wide for a reason. If that plane goes down, I’m responsible for getting that door open on time and helping other passengers escape peril, which may include laceration, evisceration and incineration. That’s a lot of pressure. Why should I pay extra to be under pressure?

The third thing I discovered is that airlines treat passengers differently based on their destination, not necessarily based on race. 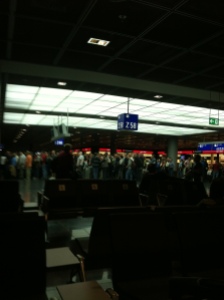 When Lufthansa called our flight to South Africa, I was appalled by the boarding process. This was no way to treat perfectly good White folk! Flying to Ghana, which is the only other African nation I’ve been to, I assumed that the boarding process they employed had everything to do with the fact that the passengers were, in large part, Black. It was carelessly done, merely separating priority passengers from economy passengers in two lines and having them board the plane by tapping their own tickets on an electronic surface and walking to the plane. There is very little interaction with or customer service from the airline representatives. Imagine my shock when all these Afrikaans and German speaking were divided into two lines, crowded into the terminal space and dismissively left to their own devices!

Finally, and most importantly, I discovered that I need to make major changes with my finances.

I had an epiphany during this trip. Apparently, there is a negative relationship between my age and my tolerance for flying economy class. In my 20’s, I could walk by first and business class on my way to my seat in the back of the plane which was ALWAYS over the engine and next to toilet. Not only would I take that walk with pride, but with a hint of smugness too.

Stupid first class passengers, I’d think to myself, we’re ALL gonna get there at the same time, but I’M going to get there cheaper!

I took great pleasure in the fact that my seat was (relatively) comfortable and that my flight attendants offered the same congenial service in economy as those in first and business class did. And then technology shattered that entire paradigm.

While service and comfort levels in economy class haven’t changed since the 70’s there have been exponential improvements in first class. I mean flat screen TVs, glass goblets, real silverware, chairs that do a full recline, tons of overhead space and at least 3 square feet of leg room per passenger. And then there’s that curtain. Once we were airborne, the flight attendant snapped the heavy, navy pleated cloth shut with a snap, quarantining the rest of chattel class from their premier customers. With every cramp and battle for leg room I waged with my husband, I felt more and more like a failure.

I decided I would dedicate to spending the rest of my life fighting against the plague of flying economy class. It just has to be that way!

Now that we’re here, I’m looking forward to experiencing new adventures. There is a familiarity being back in South Africa that is troubling me, however. I want to be wowed and astonished! But the truth is I feel like I’m back at home… and home doesn’t tend to “wow”, does it?

White People Really Need To Talk To Their Kids About Apartheid