“I didn’t know if you wanted tilapia for beef, so I told Constance to prepare both.”

“You’re so attentive. I’m lucky I married you. Hey! Did you hear about what happened at the Osu Children’s Home?”

“You mean that Anas report? Yes! It was shocking!”

“We should try to do something about that. Let’s pray about it tonight.”

“Yes… let’s. Now: would you like pepper or barbeque sauce for your meat?”

And there the discussion ends. This scene plays out in many affluent neighborhoods in Accra and Kumasi, and probably some less well-to-do communities as well. Certainly, this happened after Anas Aremeyaw Anas blew the lid off the scandalous conditions prevalent at the Osu Children’s Home in 2010, a place I could see from the front lawn of my house in Labone and walked past almost every day. Even back then, it didn’t look like a happy place, even in the smallest measure. It turns out my childhood premonition was dead on.

Regarding the hypothetical dinner discussion, let me be the first to admit my part in this absurd sequence of events. People like me – compassionate, but busy people – see something as disturbing as this eighty minute blight on the consciousness of Ghanaian humanity, and genuinely want to do something about it. So we pray, and we throw money at the problem, and we discuss it with clicking tongues and downward turned lips at Afropolitan events, we hope it works itself out, and then we forget. But in the midst of all that shallow activity, other people, in this case children, are still suffering.

Orphans Home of Hell from John Doe on Vimeo.

A question that was asked repeatedly in the ghastly video was “who is responsible for caring for and protecting society’s most vulnerable?”

Is it the responsibility of government or civil society to care for these? As you have/will see in the video, thousands and thousands of dollars in private donations have been poured into Osu Children’s Home in the forms of cash and equipment, clothing and food provisions for the orphans. So, civil society has certainly done its part when it comes to this orphanage in particular. That’s where any sense of responsibility and accountability apparently stops. If you’re familiar with the video, you’ll see that these children are subjected to conditions that are so deplorable that Charles Dickens couldn’t have imagined them in his worst nightmares.

Crippled children left to eat off the ground in the middle of a courtyard in the scorching West African sun.

Children suffering from dysentery defecate on themselves and are subjugated to the merciless teasing of their peers and left to wallow in their filth until its convenient for an adult to clean them up.

Orphans being whipped, slapped, and having their heads bashed into concrete walls by those charged with caring for them.

Children being forced to do the work of grown men and corporations who are being paid (but not rendering the contracted service) to clean out gutters and rubbish heaps with bare hands and feet!

And last, but certainly not least, the refusal of the staff to take ill children to the hospital for treatment until it’s absolutely critical, and usually too late. These are conditions that rival those of slavery in the Deep South, when those in power made it a daily priority to dehumanize and degrade their captors; in this case, these prisoners are children who have already suffered the loss of one or both parents or have been trafficked into a life of sexual exploitation or drudgery.

Who’s to blame for all this? Who are those who are responsible for these contemptible conditions? Who are we paying to fuck up on such a grand scale? That would be Sharon Abbey, Manageress of Osu Children’s Home, first in this line of failed defense, and Stephen Adongo, who serves as her superior and cohort in complacent, clueless crime. I watched in virtual amazement as this pair extolled the virtues of this putrid operation which deals so abominably in young human flesh. Were they that ignorant of the goings on in Ghana’s largest, and certainly most well-known orphanage, or were they merely regurgitating “acceptable” answers to the interviewer? In either case, their behavior is not to be tolerated. There is no excuse for ignorance or lying at their level, and they should both be fired immediately. As I understand it, conditions have not much improved at the Children’s Home since this exposé aired in 2010.

In fact, this dubious pair has been rewarded for their negligence by the Ghanaian government!  Just last April Mr. Adongo’s department was awarded seven vehicles to help his department “further their initiatives” in addition to ten other vehicles they had received in the past.  Did these initiatives include enriching the lives of the children he is ultimately in charge of? Because volunteers at the Children’s Home (whom I am ashamed to say are overwhelmingly expatriates) admit that they are met with extreme resistance whenever they attempt to take the wards out for excursions, and even met with insult for their efforts. The sad reality is that the kids never leave the compound unless it’s to attend school, where they suffer further physical abuse from cruel teachers charged with educating them. According to Mrs. Abbey, the children at OCH receive personal tutoring from their house mothers who are engaged and invested in their academic success. The marks of 12% on exams tell a different story, however.

Let me just be blunt, if I have not been obviously so thus far: Sharon Abbey is either a liar or has a severe personality disorder – one that allows her deny reality and create her own delusions. In either instance, she has no business whatsoever being in charge of the lives of other human beings and should be fired immediately.

Look at each of these pictures of individuals who have come in to provide donations to Osu Children’s Home and into Mrs. Abbey’s hands in particular. They cause me intense nausea. They are staged, formulated, pretentious, insincere, and just disgusting. 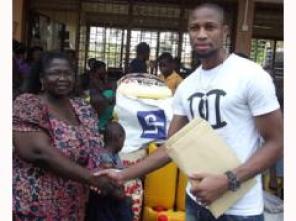 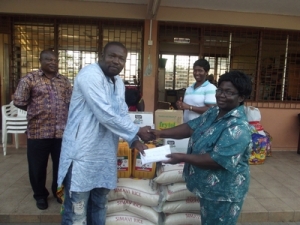 Want further evidence of her incompetence? Just have a glance at this article from February of this year, where Mrs. Abbey complains about the quality of donations she receives. She laments that many of the food items are near expiration or that the clothing is not fit to be worn, and will cost nearly 300 cedis to discard. Well, you dimwit, why haven’t you appointed an officer to INSPECT the quality of donations before you have them carted to your facility? If they are of no use, let the Port Authority deal with them. Or better yet, make your quality standards clear to your donors!

And Stephen Adongo? With a shrug, he admitted that his staff is overworked and might resort to physical violence against the children in their care. They get “frustrated and overwhelmed” you have to understand.  And just where does he think these kids – who have suffered neglect, abuse, engaged in inappropriate sexual acts with each other, and had their innocence ripped from them – will end up? If they’re lucky, in a shallow grave somewhere outside the city limits. If they are not so fortunately, they will end up living a life of crime and vice. Has anyone noticed the increase in violent crime in Accra recently? Pundits put the blame on the influences of hip hop, hip-life, and the recent influx of Nigerians, but fail to look within our own borders and dusty cupboards for evidence of homegrown terrorism. And make no mistake: we are breeding terrorists in Ghana by mistreating our most vulnerable citizens. This type of evil does not go unrequited.

And this is precisely the point: there is something nocuous to be borne from all this. Whether it ends up being on a national level or sequestered to certain pockets of society remains to be seen, but make no mistake – Sharon Abbey and Stephen Adongo are ruining Ghana, one neglected child at a time. And it’s not like these people don’t know about the adverse consequences of their actions… they just don’t care. We deserve better than those who merely pay lip service to the problems that they are responsible for solving. It was reported that 15 under-performing of Ghana’s 127 orphanages have been closed, which is encouraging. But where are the reports on staff training, therapy for children and plans for better educating this lot? Missing; non-existent.

Ghanaians, it’s up to us to improve our nation and demand better of our leaders. “Leadership” is not just confined to those have a ministerial title. It includes any person who would presume to exert influence in our society in any capacity. We deserve better than the likes of these two, and so do these kids.