I grew up poor although, I didn’t know it. Not in the sense that one knows they are female or knows that you can’t spend a day without air. I didn’t have certain knowledge of my poverty; just a peculiar inclination that my family was not rich. My mother used to drop hints like “we can’t afford that!” while we were out shopping, which helped me form a frame around the reality of our financial status. Actually, I thought we were quite fortunate and certainly blessed. Every week, a really nice food fairy would drop off a crate of cereal, milk and peanut butter by our backdoor. I saw his truck once, when I’d woken up extra early.

Poverty means different things to different people, and poverty – or wealth, for that matter – can shape a person in a myriad of ways. My family lived on the cusp of poverty, which meant some winters we burned a coal/wood stove to heat the house instead of turning on the gas or that we rarely got new things, clothes in particular, unless it was for some very special occasion.

Living within such meager means turned me into a creative person, I believe. Our house in Columbus, Ohio was built some time at the middle of the 19th century. It was my mother’s grandfather’s house. It was old, but it was sturdy. I can’t remember what it smelled like, or if it had a smell at all. My parents couldn’t afford to take us on exotic excursions, and truth be told there isn’t that much for a kid to do within the city limits of Columbus. We had to make our own fun. Our two story house had seven rooms on the lower level: a living room, a sun room, a middle room, two bedrooms, a kitchen and a mudroom. If you counted the full bath that was adjacent to the kitchen there were eight. The middle room was just that: a middle room in the center of the house. It was blanketed with ghastly royal blue carpeting, the likes of which I have never seen since we left my childhood home. My sister and I used to pretend we were mermaids and dive from the sofa onto the floor, swimming past whales and other marine life. Cardboard boxes were always welcomed, as we would transform them into a fort, a train, a castle or whatever structure a pair of scissors and a box of crayons would allow.

I always wanted to go to ballet class, but my mother informed me that I was “too fat to be a ballet dancer,” while casting a disparaging glance at what I suddenly considered to be a very fat arse. I now realize that she really meant she couldn’t afford it, but rather than admit her own fiscal dearth, she opted to assault my self-esteem.

Instead, I contented myself with wrapping a towel around my waist and pretend it was a tutu, standing on my tip-toes like a ballet dancer and prancing around my shared bedroom in secret.

But then, Christmas would come around and everything would change. Everything was new. My grandparents would spoil us with the latest doll on television, Kid Sister et al. We all three had at least two changes of new clothes. And then there was the best present of all: a shiny new bike.

In the 80’s, bikes didn’t come preassembled. At least to my knowledge they didn’t. Our bikes always come in a jumble of puzzle pieces in brown cardboard boxes stamped ‘Huffy’. On Christmas morning, my dad would bust out his wrenches and painstakingly piece together every screw, bolt, washer and pedal until thirty some minutes later, a bike – an actual, never ridden before bike – sat in the center of our living room. Ohio winters being what they are, we really couldn’t do much riding until the Spring and when spring came, boy did we ride!

Although I would have liked to, our financial predicament did not allow me to indulge in prissiness, so at age seven I pursued tom boyishness instead. When warmer weather finally came, I donned my shorts and my sneakers and rode around the neighborhood like a girl gone wild. My dad used to work two or more jobs and brought home a magnet from one of his exploits. Mr. T had a new cartoon out, and I imagined I was a part of his team. I put the magnet on my right handle bar, pretending it was a wireless transmitter and rode around the neighborhood, calling into home base for instructions for our next mission. I was thrilled. It was warm, I had a new bike, and life was good.

Finally, I got thirsty and went inside to get a drink. I had no desire to stay inside, and was confident I could drink and ride at the same time. When I swung open our back door with my plastic cup in my hand I made a beeline for my bike.

But it was gone.

The magnet was on the ground – but my bike was GONE.

We are probably only slightly better off than my parents were, but I have made a decision that my children will not feel their disadvantage so acutely. Aya just turned seven this July, and for the last two years, she has asked for a new bike. Finally, Marshall and I saw the need for her to get one. The seat was worn, the hand brakes no longer work, and the princesses emblazoned on the side now look like grungy paupers. We set aside money to invest in the one thing this child of ours has asked for consistently.

Aya and Marshall share the same birthday, so he made her bike buying experience a special one. Marshall hardly gets one-on-one time with the kids, and Aya in particular, who gets the hand-me-downs of everything, including time, is always grateful to be the focus of our attention even briefly. First, he took her to IHOP (because she loves eggs and pancakes) so they could have their own special daddy-daughter breakfast and then took her to the store to choose her very own bike. It was candy coated pink with bright white wheels.

“And look, Mommy!” she exclaimed gleefully when Marshall got it out of his trunk. “It has THIS!”

‘THIS’ was a kickstand. (Her other bike didn’t have a kickstand. She had to lean it against a wall when she was done riding.) I watched as she struggled to get settled on the contraption which was significantly bigger than her previous two-wheeler and eventually take off around our cul-de-sac. Her braids floated behind her and she had the most contented grin on her face. It was a heart-stopping delight to watch her ride.

She only had her bike for 13 days. 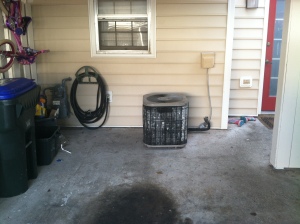 A hole where a bike once sat