People laugh at me because I have crushes on local Ghanaian artists and entertainers. Like they are not good enough to be groupie-fied  and – potentially – groped. To that I say: “Whatever!”

My father is a full blooded Larteh man and still catches the eye of young ladies all over the streets of Accra. Imagine if he had made the foray into film? Wouldn’t I also want my dad to be adored by thousands of adoring fans all over the country and yes, the diaspora? 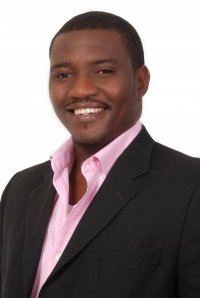 Look at his diplo face

This is why I know John Dumelo’s children will appreciate this open letter one day. Yes kids, you heard me. Your dad brings out the inner cougar in me. He is my deep forest antelope, and it is my job as a skillful hunter to capture my prey!

John Dumelo burst into the movie industry the same way he probably burst out of his mother’s womb: with gusto. The last child and only son of his parents (something he and my son share in common – and yes, if you’re wondering it IS weird to compare my cub crush to my son), he began acting at an early age, starring in ads for energy drinks, government initiatives and I believe at one point,  life insurance.

John Dumelo was born in 1984, which makes him 6 years my junior. Considering I remember 1984 rather vividly (that was the year Ghostbusters, Karate Kid II and The Terminator came out), you would think I would feel awkward about harboring amorous intentions towards someone so young. However, as 60 year old men rarely struggle with these sorts of reservations when they wantonly chase 16 year old girls, I don’t see why I should either.

John, yes! You, John! I’m speaking to you now. The information above was simply to educate those who do not know you very well. But you and I, we know ourselves, don’t we? You feel that slight breeze on the back of your neck, John? That’s me. Breathing on you.

I have watched virtually every film you have ever produced or acted in. I have yet to figure out how to get a hold of Adams Apples, but trust me when I do, it’s ON. I’m going to do you the same courtesy I did Idris Elba and suggest that you conduct yourself in a manner that is fitting of your hotness. Idris does this thing when he wants you get my attention. He opens his legs, and you? You bite your lip.

I have asked you on several occasions to stop doing this. Can’t you hear me screaming at you through the screen? Of course you can’t. But in my deranged imagination I am confident that you hear every syllable that I say.

Look at his foolish lip!

I believe it was The Game , released in 2010. There you were in all your chocolate glory, atop a mahogany framed bed and astride your co-star between cotton sheets. Who was she? I don’t know; some chick with a weave that you met the liquor store in a couple of scenes before. I was irritated with what I was witnessing and what Ghanaian film maker had the gall to dream up such a scene, let alone digitally distribute it. And then that’s when you did it. In mid-stroke. You bit your lip.

And I lost it.

It’s your own fault, John. If you had just been a regular two by four Ghanaian actor, I could have easily ignored you. Oh no! You want to be the freakin’ best at your craft. You want to explore new subjects and themes. You want to be fearless in the roles you take on. I mean, what Ghanaman in his right mind willingly chooses to be the second half in a gay partnership? Which Achimota boy have you seen depict mental illness in the way you did in Letters to My Mother? That’s crazy, John.

Do you like Prince? We can get ourselves a red corvette and drive to the waters of Boti Falls and purify ourselves in them. That’s an adaptation from a scene in Purple Rain. Wait. I think that film came out before you were born. Never mind.

I have much to teach you, my cub.

PS: I hear you have a clothing line/fragrance coming out. I’m going to swath myself in one or both, and then roam the streets of Accra until I end up at the door steps of Woodin and call your name until you come out and embrace me! Too much too soon? Ok. I can tone it down… but only a little. And only for you!

Now bite your lip for Momma.