As many parents do, I observe my children and reflect on my own childhood. Did I once really eat my own feces? Was I EVER that creative? Were my own parents as incensed as I am when my kids lie to me? The answers to all these things are “yes, of course”. Some things in the parent/child dynamic and childhood experience haven’t changed since Eve spat out Cain; and yet many things are very different. It’s the nature of progress in the animal kingdom. 200 years ago a squirrel would never have to worry about getting run over by a 4 ton vehicle. The worries of the ancient squirrel included traps and arrows, not death by suppression. Conversely, 200 years from now my great-great-great grands wouldn’t know what to do with an iPhone – a marvel of our century – if you dropped it in their lap and cried “Save the world with this!”

However, I am fairly confident that one of my future decedents will certainly consume his/her own poo in their infancy. Some things will never change.

Last night, I laid in bed thinking about my two oldest girls and how their relationship to each other is very much like my sister’s and mine in many, many ways. A-Dub and I had to share clothes, toys and at one point, a bed. And even though I have secured separate beds for Nadjah and Aya, they still end up on the same mattress at least a few times a week. I began to ponder other things about similarities of our existence and eventually ended up stuck on their hair. Oh… that hair!

One of the failings I inherited from my mother was the inability to do hair. There were more than a few days when I went to school as a third grader with completely jacked up hair. It was like she just gave up. I was incredibly tender headed, and my mother was equally heavy handed. This, of course, made for a bad mix. One day, my maternal, chain-smoking grandmother came to pick me up for an outing, and upon seeing my fuzzy locks decided to take charge. SHE would do my hair.

After she had taken me to see a movie and plied me with fries and beef from Ponderosa, she sat me down between her legs, lit up a cig, and began to untangle my hair. When I coughed, she turned on some gadget that was meant to suck/blow smoke away. I don’t know what its intended function was, because it didn’t work. I went into a coughing fit.

“Oh, the smoke ain’t THAT bad,” she sneered.

She sounded really displeased, and I didn’t want to displease my beloved grandmother. I tried to control the coughing and focused my attention on the pain searing through my scalp. Good golly, this was awful! I didn’t cry. I just winced and hunched my shoulders in agony, which seemed to irritate her further.

“I’m not even pulling it!” she croaked contemptuously.

I don’t remember how the hairdo ended up, but I do remember my grandmother confronting my mother about “the child” (meaning me) needing something called a “permanette”.

My grandmother was livid. She hollered a few other phrases about “nappy hair” and “permanettes” before jumping back into her burgundy Buick and screeching out of driveway. Her engine roared as loudly as she did. Even her car was angry with me! I walked dejected into our kitchen and poured myself a cup of Kool Aid in an attempt at consolation.

And that’s how I ended up with a jheri curl.

My mother was loathed to process my hair with chemicals, but a jheri curl wouldn’t permanently straighten my hair. It would just loosen my natural curl pattern, a trusted friend explained. A few days or weeks after their feud, my grandmother came by to pick A-Dub and I up and took us to her beautician. I remember the blue and pink floral wallpaper on her walls. I remember the hard, thin plastic rods she tightly rolled my nape-of-neck length hair into. I remember looking in the mirror after she sprayed on something cold and wet and feeling wonderful.

My hair was resplendent.

I shook it carefully. And do you know what happened? It moved! MY hair actually had movement!

“You look so nice, Malaka!” A-Dub squealed from beneath the dryer. She had a plastic cap on her head, and her tiny body was settled on a pile of phone books.

My grandmother and her beautician took in the results and smiled. They were both pleased. My sister and I left the shop, an ecstatic, glowing, dripping pair. And that’s how our jheri curl saga began.

Every night, we carefully sprayed our hair with the contents of a yellow bottle my parents had purchased and slipped our shower caps on. Failing to do so would mean we would wake up with dry hair, and I can only thing of a few things worse than a dry curl. Among those things are a boil on one’s breasts and/or Armageddon.

My sister had a blue rat-tail pick and I had a yellow one. In the middle of the day, whenever it suited our fancy, we would spray and pick our hair. My dad bought us plastic head bands to slip over our foreheads for extra flair. We were just too cute! 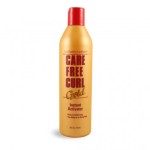 When we moved to Ghana a year or so later, we got one last re-touch at this hole in the wall salon next to Bus Stop and a few months later that was the end of the jheri curl for us. My parents (and I believe my mother was behind this decision) were not going to finance any more trips to the salon. They stopped buying our precious activator. Slowly, ever so slowly, my sister’s and my hair returned to its coarse, natural state. Our curl was gone, but happy the memories remained.

“I used to have a jheri curl too,” I once told my new Ghanaian friends proudly when they came to our house to watch Coming to America one day after school.

Their reactions were varied, but all of them full of awe. Some doubted. Kids didn’t get curls! Only adults did! Some thought my parents were the best in the world. Some were jealous. I stopped telling people I once had a jheri curl when this guy I really fancied broke into uproarious laughter. He told me I was a borga. That had to have been around ’92.

Last night, as I relayed these events to this other guy I once fancied and eventually married, he too broke into a fit of giggles. I had just put oil in the girls’ braids and slipped their bonnets onto their heads before sending them to bed.

“Can you imagine Liya with a jheri curl?”

He was choking with laughter.

“She would look ridiculous,” I muttered.

Liya has beautiful shoulder length hair. Imagine that. A three year old with a dripping shoulder-length curl, glistening in the Georgia sun… Not in 2013!

My Preemie is Applying for Her First Job. How Did We Get Here So Fast?

Disappearance and Displacement: What I Learned When I Went Back to Davistown

I’m Co-Parenting with an Inherently Violent Man. I’m Fearful of the Repercussions for My Child.