Ever since our kids have matured enough to grasp the concept of the holidays and the roles required of all the characters therein, we’ve had a hard time contending with the subject of Halloween. By “we”, I really mean “me”, because my husband doesn’t have difficulty dealing with the subject at all. As a devout Christian and a deacon to boot, Halloween is neither to be celebrated nor suffered; end of discussion!

However, since I am a mother, and understand (or at least have more sympathy for) what it’s like to feel excluded from activities that your peers are participating in, I’ve always tried to find ways to make the kids to not feel like they were missing out on the season. After all, how is the idea of a fat White man in a red suit breaking into your house with the goal of cajoling your children to behave properly in exchange for gifts any less demonic than an imp frightening your kids into good behavior in exchange for gifts? Not very much different, in my estimation.

My husband and I both grew up trick or treating on Halloween, and I remember what a thrill it was. It was one night when you could pretend to be whatever you wanted to be, with (almost) no judgments. Our costumes in those days were largely innocuous: cowboys, astronauts, gypsies, Casper the Friendly Ghost… We all got our candy, took it home for our parents or grand-parents to check for needles and ate it piecemeal or gobbled it up in one night depending on how the rules in your house were laid out. These are the things I fully expected my kids to grow up doing!

Then Halloween went and got political.

I’ve written before about the spiritual aspects of Halloween and why my husband objects to it (and therefore why I’m supposed to object to it as well). It’s the Devil’s birthday, it invokes a spirit of fear, it celebrates all things demonic, etc. We’re not one of those family’s that operates in the “spiritual realm”, so none of that has really bothered me in the past. I don’t spend too much time thinking about the devil or talking to my kids about him/it, so for years I politely sat through teachings about Wiccans and Samhain and lunatic werewolves, knowing full well that me and the kids would be at our community park gleefully bouncing on a hayride with face paint, jack o’ lanterns and yes – probably a witch or two – much to my husband’s displeasure.

But this year, Halloween had to go and get political!

By now you’ve seen a spate of news stories about people donning blackface for Halloween. ‘Merica! Allow me to lend you this piece of advice: When it comes to blackface – and doing it correctly – there is only one rule: DON’T.

I honestly can’t think of a single time when blackface is ever appropriate. Not in a play. Not in a movie. Not even running around in the solitude of your bedroom with stuffed zoo animals scattered about. It’s just wrong!

In case you don’t know what I’m referring to, here’s but a small sampling of our best, brightest and most talented painted in offensive blackface. 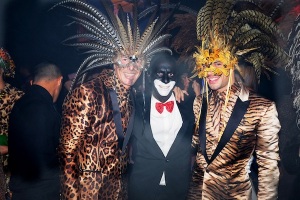 High end fashion even joined in the party! Darkies pick cotton, and we use cotton make clothes and sell it back to darkies! Thanks Dolce & Gabbana! 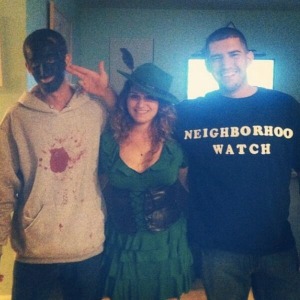 This disgusting image depicts the murder of Trayvon Martin in jest…

It’s not a party without drunk Hitler!

Check your local college campus for more Gidgets dressed up as minstrels and defending the act as “free speech.”

I know, I know. People want Black folk to get over it; Jim Crow’ and segregation’ and all that is in the past. But daggone it, you have to let us catch our breath! The majority of ‘Merica spent 400 years punching us in the balls, and before we can struggle to our feet properly, they’re punching us in the chest. Can we just get a quick reprieve? Can we all agree that when the cops stop profiling Black kids shopping at high end stores, or when a multi-millionaire asks to see an expensive handbag without swiftly being told that “she can’t afford it” (presumably because she’s back), maybe THEN we can claim equality and you, ‘Merica, can trot out your beloved minstrel tropes?

Because that’s what blackface is: a homage to an era when people of color were depicted as mentally inferior, bungling, clownish beings by white people in oil black face paint. Well, not counting Beyonce – whose stunning portrayal as an “African” woman still shocks me every time I see. Boy is she vacuous.

A parent is actually handing this out to kids in her neighborhood. Now why would you hand that out to a kid? Just turn your porch light off and ignore the beggars for goodness sake! No need to be such a…. Oh! I get it! You’re being an evil witch! Good form… Well played!

Needless to say, I have a sour, slimy taste in my mouth that will only be cured with the saltiness of brined turkey meat and stuffing. We will not be celebrating Halloween in my house this year. It’s gotten too ugly. More and more people are making poorer and poorer choices, and I can’t have my young’un’s in the street in the midst of such profound publicly sanctioned stupidity.  The kids think it’s because of all the spooky devilry they’ve been told about in Sunday school. That’s fine. I’d rather have them believe that than to have to explain that the society they are being raised in is overrun with racist idiots.

Now, let’s see how ‘Merica is going to ruin Christmas for the kids this year…. Any wagers?