Don’t misread what I’m saying oo! I’m not talking about Concentration Camps and Con men. I feel like I have to clarify this at the onset because I have an (unjust!) reputation for being a cynic. No, Random Readers and MOM Squad, I am referring to something far more pleasant and saccharine than bullets and barbed wire.

In ancient days, there were always feasts and festivals over the course of the year. Have you ever noticed that? The Greeks would get naked and gather for the Olympics, the Jews would have their Feasts of First Fruits and Unleavened Bread, Ghanaians had (and still have) Aboakyer …

Because it is important to gather with your tribe – with people with whom you share common interests, goals and passions. Remember in the Bible when Elijah thought he was all alone in his dedication? God quickly checked him and thundered from the heavens:

Yes. Those were the Almighty’s exact words, and if there had been a YahwehCon, perhaps Elijah wouldn’t have felt so alone. That was just poor planning on his part. 7001 and one prophets? Now there’s a party!

When you do something unique and out of the ordinary in the physical space that you occupy, it’s easy to be lulled into the belief that you’re all alone. That’s why camps and cons are so vital, in my view. Space and tech camps for kids, SXSW for geeks who love music, and Comic-Con (and its Southern younger brother, DragonCon) are gatherings and feasts of our modern age. They bring you, the isolated weirdo in your village, to a realm where you can congregate with like spirits. You feed off their energy and they nourish themselves off yours. And you know what? People at Cons and Camps are usually the nicest folks you’ll ever meet, because it’s in that environment that they can take off their masks and be themselves.

That’s why it’s KILLING me that I will not be a BlogCamp14 in Accra this year!

Even as I type, the tweets and live feeds from people converging on the city are charged with expectation. One user said he didn’t know why he was so excited to be going. I refrained from pointing out the obvious: That’s it’s going to be freaking AWESOME, that’s why you’re knickers all on in a twist, my brother. 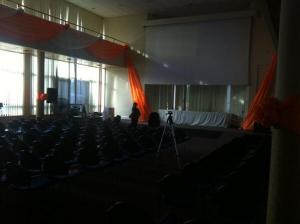 First of all, the event is at the Kofi Anan Center for Excellence. Second of all, there’s free Wifi – which is pretty much an anomaly in Ghana. And third – just wait for it – there’s free coffee All. Day. Long. Java fuels a blogger’s loins and fingertips. (FYI: Authors drink tea. They are in it the writing process for the long haul. That much caffeine would cause a pulmonary aneurism.)

BlogCamp is the brainchild of Kajsa Hallbert Adu who is supported by an excellent cast of executives who have re-injected enthusiasm into the world of the digital arts. All forms of social media and the content produced therein are given equal attention at BlogCamp. Photography, Vine videos, Keek, Twitter content and the Grand Mammy-of-it-all, the traditional 500 – 1000 word blog are discussed, work shopped and honored at the end of the night.

Lawd, I wish I could be there. All those laptops and smartphones and cameras… I can hear it now:

“Chaley, my phone died! Any plug in this place??”

“Herhhh…I left my power chord. Can you believe it? What? I can use yours? Thank you!”

“Of course I’ll take a selfie with you!”

I could waffle on, but you get the point. And besides, I have to shut down and prepare for an 8 hour drive to Ohio to pick up the kids.

Oh! Some of you on this end of the pond have asked if Mind Of Malaka won. It is with some angst that I must report that MOM did not make the shortlist for the awards, but that’s okay! It was great to be a finalist. That you Allison, MX5, Sister Deborah, Ms. Davis, Swaykidd and Alex in Wonderland for your votes and to everyone else who voted for MOM secretly. You guys are the best audience I could hope for and make every keystroke worth the while.

What is your tribe? Are you a Trekkie who is fluent in Java as well as Klingon? Or perhaps high fantasy is more of your thing? Perhaps you’re more into Steam Punk? What Cons and Camps have you been to or would most enjoy attending? Discuss! ↓