First of all, let me give praise and honor to Friday, whose sweet elixir I’ve been waiting to taste has come at last. Though you tarry, Friday, you come faithfully every week, and I just want to thank ya! Happy Friday, one and all!

Life is interesting. I never imagined in my wildest dreams that I would ever find myself sympathizing with Beyonce! You all know how I feel about her. The fact that I’m more acquainted with her crotch than I am with her music is telling of the nature of our relationship. (I’m talking about her ever present leotard uniform, guys! Get your minds out of the gutter.) Beyonce and I have no kinship. She makes in half an hour what I will make in a year. She’s tall, I’m short. I have a great command of the English language, she doesn’t. She has the boisterous Bey Hive, and I have the reserved and largely silent MOM Squad. What therefore could Bey and I possibly have in common?

Plenty, it turns out. We’re mothers of Black children…Black GIRL children. That makes Beyonce my sister, for better or for worse. *Sigh*. What a burden.

Any woman who has had or is raising a Black girl child in this country has one common struggle: and that struggle begins and ends with the roots and tips of their daughters’ hair. If you have not seen it already, there is a petition going around called Comb Blue Ivy’s hair. As of this morning, it has 3000 signatures. That’s 3,000 idiotic dolts who have nothing better to do with their time than concern themselves with the maintenance of the tresses of a child they didn’t birth or care for, and more importantly, whose existence is so far outside of their cipher that the only way they can reach her is to make poorly worded pleas to compel her parents to make their child look more acceptable in THEIR view.

If Beyonce is reading or has read these comments (which I doubt, as she probably spends her spare time diving off her yacht into a sea of sparkling blue diamonds – ouch! – rather than giving heed to the whining of internet trolls) she might be feeling some kind of way. I know exactly how she might – but again probably doesn’t – feel. When all of my girls were born, I had a cabal of worrisome women at my ass questioning why I wasn’t doing anything with their hair. When Nadjah was born, I was a first time mom dealing with some pretty heavy stuff. She was born premature; I had no financial support from her Douche Bag sperm donor; I was living in a loft apartment with little space for myself, let alone a baby; I was working full time and trying to beat the clock to daycare to avoid the $1/minute late fee in the midst of Atlanta traffic. Suddenly, I was thrust into a world of endless laundry, new bills and sleepless nights. And on TOP of that, I did not know how to do hair. That was not a skill my mother passed on to me.

You would assume another Black woman would see all that I was dealing with and offer to lend a hand, but all they wanted to know was “when I was going to do something with that child’s hair”. Nadjah’s hair was curly and beautiful, but lord was she tender headed! I would wash it, oil it, brush it and be done with it. A clean, well-fed baby with clean hair was of course was not good enough for the aforementioned cabal. They wanted more, and I simply couldn’t give it! Ultimately I was compelled to snap; to threaten to slap the next person who asked me about some hair. Violence is never the answer, so I switched tactics and I kept a comb and brush in my purse at all times, offering it and my child to all those “concerned”. I was generally met with indignant silence.

I’ve written about one of the White mom’s at my kids’ school who adopted a Black child. Now she ACTUALLY is ruining her daughter’s hair. She’s afraid of and intimidated by it, and I approached her about it and offered personal help. (She declined.) There is a distinct difference between not touching your child’s hair at all and not binding it in cornrows and ponies, as is Blue’s case.

Who knows what kind of day Blue Ivy has had when we see those candid shots of her? Who knows if she’s tender headed? Who knows what kind of hair care regime Beyonce is employing? When all you petty Black women become platinum selling multi-millionaires (and these are the petty concerns ONLY of Black women, trust me) you can ask her, since you will finally be in the same league! In the interim, help a sister in your local ‘hood out and leave Beyonce and her husband alone.

The female form has always fascinated humanity. There have been odes written to it, sculptures created of it, paintings commissioned for it. Almost every woman holds some secret fantasy of having a nude image drawn or photographed of herself. Our bodies have many uses: to bring life, to bring peace, to nurse presidents and clowns (and clownish presidents) and to provide a comfort that the male form cannot. The female form is many things: beautiful, terrifying, intriguing, alluring, resilient, strong, powerful.

Is that why we’re so concerned about boobies? No seriously. 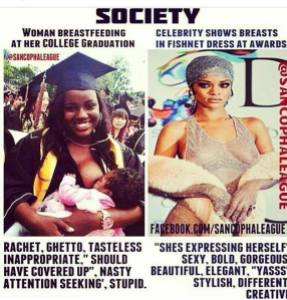 I saw this meme floating around on social media a few days ago, and I can’t believe how many negative things were said about Karlesha Thurman. (Rihanna courts controversy, so this new stunt is nothing remarkable.) I haven’t been following Ms. Thurman’s story very much, because I come from a continent where bare boobs are common place. You never know when you’re going to encounter an areola. You could be buying eggs in the market and a boob could come flying out. You could be in a salon and have the madame pause in mid-braid to feed her child. What you will NOT find is African women hiding in the stinking, dirty toilet or covering their babies’ faces in the hot sun to feed their kids. You learn to get comfortable with the utility and presence of breasts in Africa.

Do you go to the toilet to have your lunch? Do you use a towel to cover your face when you eat? Why should you compel another human being to do the same? Seriously, Americans need to get over their weird Victorian Era shackles and let our babies just LIVE. Ms. Thurman, unlike Rihanna, had her breast out for a reason: she was maintaining life. The fact that she was doing it while getting her degree is all the more remarkable. How many of us in the “community” have eschewed higher education by reason of the presence of an unwanted/unexpected/inconvenient child. Where is YOUR resolve? If nothing else, Karlesha Thurman has proven that she can multitask and thrive under less than ideal conditions. She should be hired immediately and then promoted soon after.

Hopefully, if we’re all so lucky, she’ll concede to touring the country giving seminars on topics like

Just Get It Done

A Baby is Not the End of the World, but the Beginning of a New One

Cambodian Breast Milk is Delicious, But this Chocolate is Pretty Darn Good Too