FUBAR: F**ked Up Beyond All Recognition

Ghana: (For people like Ellen DeGeneres) That country that provides most of your chocolate, provided 30% of America’s slave labor, and that state in Africa President Obama visited not too long ago.

They came armed with their iPads, digital cameras and a plethora of smart devices. Some came chauffeured by their hired drivers, and others by public transportation. Parents came with their kids and  girls came with their boyfriends. All had a singular goal: To let the ruling government know that they would no longer sit silently as Ghana descended further and further into the FUBAR trajectory that it has been in since Kotoka’s first coup. 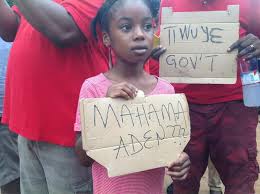 #OccupyFlagStaffHouse is the first time in Ghana’s history that the middle class as a group has taken to the streets to register their displeasure with the ruling government. Ghana, like many countries in Africa, is accustomed to strikes. Our doctors, nurses and trade unions strike regularly. These are professionals and blue collar workers who rely on the government for their salaries- salaries which are in some cases in arrears of a year or more. The protests of these entities have in recent years become little more than white noise. The government merely yawns and placates the suffering with more platitudes and promises.

We’re used to things not working in Ghana, and for any African who lives north of the Limpopo, a lot of our social ills mirror each other, irrespective of the country of our residence or birth. Similarly, we who find ourselves in the ‘middle class’ deal with the ineptitude of our leadership in the same way. We find private solutions to public problems. If the municipal water and sewage does not reach our homes, we dig boreholes and install septic tanks. Public transportation doesn’t come by your house on schedule? No problem! We’ll buy a car. Public schools failing abysmally? No worries! I’ll send my kids to GIS/HGIC/any one of the new dada ba institutions mushrooming in the metropolis in exchange for exorbitant fees.

The middle class (I personally think it is an elite merchant class) has been functioning in a stupor like this for so long that it does not even realize how their selfish action has had such a negative impact on Ghanaian (or insert your country) society at large. In recent months, Ghana’s government has proven that it has the power to sink this ship we call a country entirely, and drown us all with it. This is what made folks who ordinarily are content with shaking their heads and hmmm’ing over a bowl of chilled mangoes at the shame of it all sit up and take notice.

I wasn’t there, but like most Ghanaians who have achieved a middle/upper (or lower middle, in my case) class lifestyle and who live abroad, we followed this protest with keen interest. Many of us know those people who took to the streets personally. Many of us commune in the same circles. We were and are also interested in the outcome of this protest – and others like it to follow – because we invest in our country. In 2011, Ghanaians sent $119m in remittances to loved ones back home who otherwise would be unable to afford school fees, or rent, or the cost a funeral.  When those dollars and pounds are affected by poor government policy, it affects OUR bottom line as well. Suddenly, your family that was able to survive off of supplemental $200 a month needs an additional $800 a month because inflation is so rampant and the government is threatening to impose a 17.5% VAT on banking services as well! 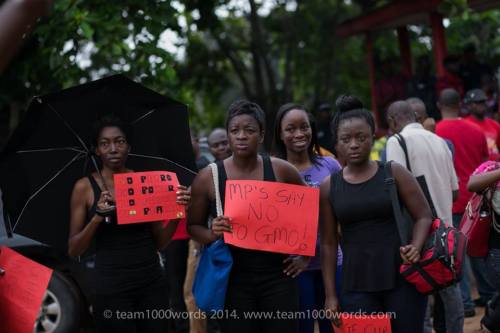 There are several articles that talk about the genesis and the need for #OccupyFlagStaffHouse. They are all very cerebral in their analysis. It is my job to talk about the more amusing aspects, and there is nothing more comical than the government response to the whole affair.

Before the Occupy protest even began (which was amazingly orchestrated in 48 hours!) the unofficial response by some NDC loyalists was to set up a counter protest at Black Star square. They created this blog on June 29th  listing all of the laughable reasons why JD Mahama needs every Ghanaians support. In regards to the recent fuel shortage that wrecked the country, they explain that it is only because of “disagreements” about unpaid monies that led BDCs (bulk oil distribution companies) to cut off our supply. How is this the president’s fault, they wonder aloud?

First of all, if you owe me 1.8 billion cedis (or $597,908,970.00, if you will), I’m cuttin’ off your supply too. And it’s the president’s fault because he hired the guy responsible for paying the bill and he didn’t do his job. Nepotism in Ghana is a helluva drug!

I was all geared up for a “protest-off” à la Breakin’ 2: Electric Boogaloo, but the group called off their counter protest amid ‘security concerns’. I see why. The government sent Afro-Robocops and tanks to meet the Occupiers! Is this how you prepare to greet people who simply want you to do your job? You mean who have ALL these resources but you can’t go out and catch the armed robbers terrorizing our country??? 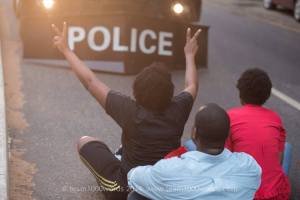 Heh. Where did they get the fuel for this tank? 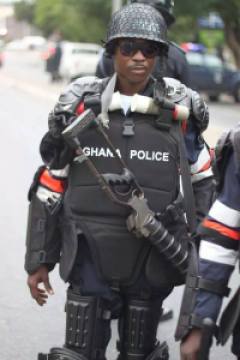 Can we talk about Hannah Tetteh for just a second?

This is not our first tango with Honorable Hannah, Minister of Foreign Affairs and Regional Integration, here on MOM. Remember when the Chibok girls were kidnapped and we BEGGED for our leadership to show some solidarity with the Nigerian government, just to say “Hey dawg. Boko Haram sucks, and we support you?” She said it was not possible. Protocol did not permit that. 17 hours later president Mahama released a letter that was back dated saying he BEEN sent a letter over to Goodluck n’ dem. The woman has proven that she is either 1) clueless, 2) should not have a social media account or 3) all of the above. 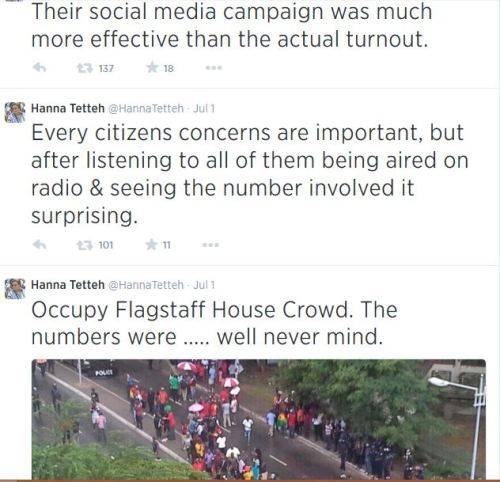 If you are going to tweet and comment publicly in your capacity as a Minister of Parliament, mocking the people who fund your comfortable lifestyle with their daily hustle is probably not good form. Don’t worry. She was dealt with quite nicely.

Word of advice: If you’re going to throw shade, be prepared to have some smothered all over you as well.

Can we also talk about the boo’ing? *snicker*

A flagbearer aspirant of the New Patriotic Party (NPP), Stephen Asamoah Boateng was booed by the ‘Occupythe Flagstaff House’  when he presumed to address the media on the protestors’ behalf. He slinked away amid shouts of “No politicians!” and “you are all the same!” It was glorious. Hopefully someone will make a GIF of his walk of shame down the sidewalk.

All was well until the unthinkable happened. They arrested Edward Tagoe, a firebrand entrepreneur who is well-known in influential circles. (I still think you’re a misogynist, Edward.) Yei! Come and see panic! One woman living in the country sent me frantic inbox messages talmbout:

“This is why you need to be quiet on social media!”

“These people are just marking themselves for trouble!”

How. How can a woman of such stature and education be so afraid of her own government? She is not alone. That’s what kept so many people who know this country is in a perpetual state of FUBAR at home or in some cases, out of the city altogether. They really do believe their government would punish them for exercising their rights! Edward Tagoe was eventually released and seen taking smiling selfies when he rejoined the protest.

As I hear it, the police tried to bully the protestors, but there were far more heartening stories. Secretly, a number of officers confided that they also support the protests. Things are near unbearable in the country. It’s hard, and while Hannah Tetteh & Co sit from their perches taking snapshots of the people they presume to piss on daily, they should remember that we are a people who do not forget.

Ah, it was a glorious day to be a Ghanaian again! To say I was – and am still – so proud is an understatement. Never mind that the news as of today is that government has gone to accept a $156m loan to purchase sanitary pads for girls in rural areas instead of building a sanitary pad factory…*sigh*. Aluta contiua.

Did you join in the protest? Why or why not? What was your favorite part of the day? What hopes do you have for action after this? Or do you think the protests were a waste of time? Is it time for ALL Africans in similar situations to do the same and demand more of their governments? Discuss! ↓