Good Lord. I’m suddenly struck by the First World Problem-i-ness of this title. They are shelling babies in Gaza. Some people are hunting for food and shelter, but I’m hunting for “happy Twitter”? Like that’s a real thing?? Moving right along…

Fans of Dave Chappelle might remember a skit he did back in ’09 about what the internet might look like if it was a real place. For those of you who don’t remember or (gasp!) have never known, click here: http://FunnyOrDie.com/m/2p5u

All manner of bizarre things happen in Chappelle’s virtual search engine world – from questionable encounters with goats and negroid fawns that spontaneously break out in song. At that time, Twitter was pretty much in its infancy, and Facebook was approaching the height of its popularity. It was hard to imagine that the internet could be a real, actual place that one could visit. But like the emergence of Super Gonorrhea and no bake cheesecake, if you give time enough time, your worst/best dreams can come true.

As we hit the apex of 2014, we now have a new macrocosm known as the Twitterverse. The Twitterverse exists within a celestial body known as the Innanets (or the Interwebz, to some), and has numerous distinct fields of thought and realities. No, I’m being dead serious.

I have visited or heard of these different social media colonies. I’m an active member of African Twitter. I seldom visit Black Twitter, but will only of drawn in. A friend of mine resides on Russian Twitter. A good number of my friends live on White Reddit. Old people and religious groups dwell within the barren land of Facebook. And of course, there is Chinese Twitter…which is actually made in China and known as Weibo. (Those dern Chineses can’t stand to be like the rest of us. Gotto go and have their own ‘made in China’ Twitter n’ such.)

A friend of mine attended a conference a few months back about communications in the 21st century or something like that. Part of the meeting was to discuss what a feminist internet might look like. Not just a community within the Twitterverse ooo…they mean a whole new Feminist Innanets! I wondered what that might look like as well, and decided that it’s not a place I’d like to remain permanently. The feminists that I encounter on Black Twitter aren’t particularly nice or happy people. But then neither are the Africans on African Twitter and so forth.

Is there a Happy Twitter? If so, I want to find it.

When I first opened my Twitter account, I was completely baffled by how it worked. I took some advice from Kobby Graham who said (and I’m paraphrasing) “Your time line is like a garden: you have to cultivate it”.) I took that to mean that you can’t just let anyone and anything into your precious space. You have to be selective. So that’s the rule I’ve followed… And I have tried very hard over the last few years to be attentive to who/what I allow my eyes to see on my TL. Despite my best efforts, my TL isn’t the most inspiring place. It’s usually full of rage/outrage/disappointment and recently booty cheeks. I follow this one guy who is ALWAYS posting nude pics of girls. Ugh.

If you spend as much time on social media as I do, you run into all sorts of people. I think we all like to think we’re “good”, but those 84 keys on our laptop/PC brings out a brand of boldness in us, and that brand isn’t always particularly HAPPY, you know?

I have a ritual every morning: I wake up, check the time on my phone, enter in my passcode, check my email (which is a deathscape of spam), check my Facebook (which is a deathscape for ads promoted by Facebook) and then finally I check my Twitter account for some real, authentic human interaction. It’s always so…depressing! Kola Boof has dedicated the last 8 hours to talking about how women in Arab nations have to sip a man’s pee to demonstrate their subservience, YNaija often has stories about raped toddlers or rappers who are breaking women’s hearts, and everybody else is RT’ing the very most shocking news of the day. And then I jump in and contribute my portion to this mess. Once in a while there is a skirmish with some random stranger who has taken offence to a stand or statement I’ve made or retweeted and then my mentions become a battlefield. Was I alone? I asked an e-buddy of mine.

Ah-ah! Things can’t go on this way. If I am to exist in this Twitterverse within this here Innanets, there has to be a happy place I can retreat to…like the Bora Bora of the Twitterverse, if you will. That’s why I created an @LaikaHappy account last night and asked for suggestions on who to follow. The criteria was simple: I wanted all my currently followers to send me the handle of any particular person or group who was perpetually positive and happy with their tweets so I could follow them back. So far, the response has been abysmal. I only got 5 recommendations. Could it be that most people on Twitter are just unhappy? Again, my e-friend confirmed my suspicions.

So here’s my question to you:

Are the people you interact with on social media primarily negative? Are you comfortable with that? Is happiness in the e-universe an important pursuit, particularly in the face of Ebola, rigged elections and all the other ills that are plaguing our planet and taking up so much of our attention? Are we as a race more devoted to outrage than to the pursuit of joy? Discuss! ↓

Oh, and if you are a happy tweeter, holler at me so I can follow you! 🙂 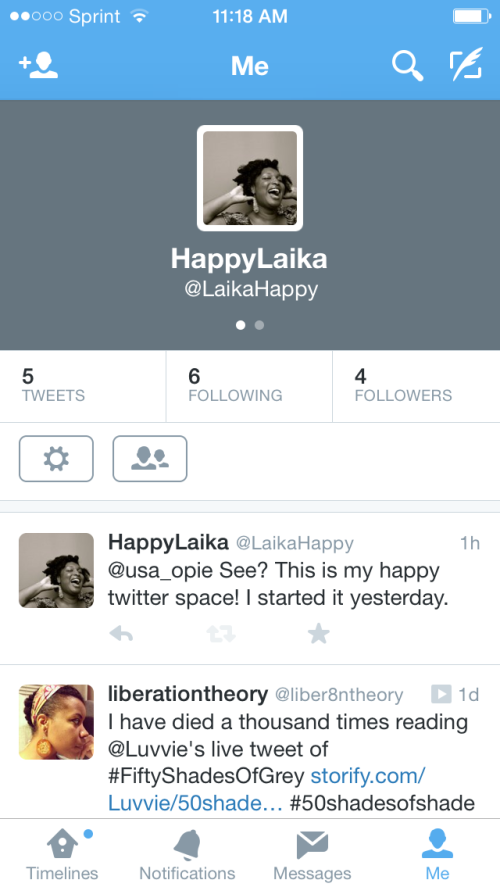