We all don’t use social media the same way. We can agree on that, right? Some people create accounts which are simply used to follow/stalk certain users. Some people are actually interested in contributing to the discourse on a particular subject. Some people never comment on anything; ever. Others still don the cape of the QWERTY Crusader and believe it is imperative that they comment on every tweet, like or status on the Interwebs.

A decade ago, I myself was a QWERTY Crusader, on my way to becoming a keyboard thug. A few encounters with some people who had no conscience, no line, broke me of that. These days, when it comes to other people’s conversations, I keep my comments light and happy unless specifically asked. This has become the norm on social media these days. Nobody really just butts in on someone else’s conversation…unless they are a troll. That is why I was so surprised to find this guy in my mentions today.

I’ve already told you all I’m not doing Ferguson. I did Trayvon Martin and that took too much out of me. And it hurt. I cannot spare the emotional currency that is going to be required of every person in this nation who sees Mike Brown’s killing for what it is – murder – when the end comes and the officer in question is exonerated and escapes all of this unscathed and nothing changes for another 100 years. So no, I’m not doing Ferguson. I’m burying my head in the sand on this one.

And yet…and YET!…Ferguson seems to find me. No matter how deep I plant my head in the mud, Ferguson always finds a way to locate me!

As the list of Black White Supremacists grows ever longer with that über bootlicking porch monkey Larry Elder leading the charge, I was horrified to find Juan Williams in their company. As a rule, I respect Mr. Williams. I think he’s a great journalist and very center when it comes to his opinion. Except, that is, when it comes to Black American affairs. Larry Elder may be a porch monkey for the establishment, but Juan Williams is right behind him, grinning, slapping his knees and “ham boning” in time as my kids call it.

He made some remarks today about Black people acting like thugs and not being disparaged against if they didn’t act like thugs, etc. This from a man whose son Raffi was described by a former fellow student while at Haverford as a “disrespectful, loitering, drunk, rude ass”. Fortunately, since Daddy sat on the board of this college, young Raffi went on to boast with glee that he could “slack off, because he would get in no matter what.”

But, you know, Raffi is an RNC staffer, so that’s not “thuggish” behavior. That’s just a college kid enjoying his daddy’s influences and his personal privilege. Funny how the same behavior on Crenshaw can get you shot. Funny…

Anyway, I expressed my displeasure with Mr. Williams’ opinion by calling him a Black White Supremacist, as he is indeed pushing the agenda of the KKK and all the baby terror groups and policy that are offshoots of the Klan’s ideology. A few hours later, this dude shows up in my mentions.

Now, anyone who knows me – and truly knows me – is aware that I am a habitual line stepper. Was it wrong for me to say the man looked like he raped babies in his spare time? Perhaps. But that’s why you don’t talk to strangers. I am a STRANGER to J Michael Coleman. I’m liable to say anything. So is anyone else on Twitter, which is why I only follow a handful of people. But this isn’t about social media etiquette; this is about Mr. Coleman’s intense reaction to being racially profiled. From what I can tell, he didn’t like it one iota. Nope, not one bit.

You all know I work at a shoe store. Guess what group causes the most shrink – the most loss due to theft – in our store? Hmmm? No, you’re wrong. It’s White women over the age of 40. They will steal anything: the umbrellas from a London Fog twin set, change purses, those god-awful Grasshopper shoes, Kenneth Cole sling backs and anything Tahari. So while my manager is mobilizing her team to chase after a gaggle of “thugs” in the athletic department, Mildred and her pet dog will be walking out of the store with a pair of Ralph Lauren boots this autumn.

“The boogie man wears khakis.” That’s what Akuba Sheen and I used to say. It’s not the guy in the hoodie and baggy pants you need to be afraid of: it’s the dude in the boat shoes (with no socks) and Dockers you need to fear. These are the men who steal millions of dollars from corporations, destroy families, and shoot up movie theaters. But no, let’s everyone panic when a corn-fed Black kid is walking through a new neighborhood with an iced-tea in his sweatshirt pocket.

I wondered if J Michael Coleman knew what that felt like. You know: to be looked at with suspicion before you had a chance to say three words? Because bath time with kids was done and my blood sugar was relatively stable, I had both the time and the energy to give him a glimpse into my Black world of perpetual assumption and bias . 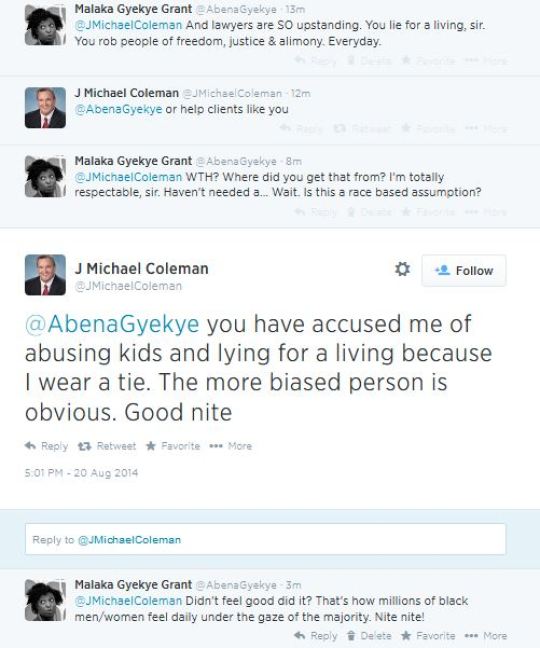 Gosh, he seemed not to like being judged so severely by appearances, or to have someone assume the worst of you because of one attribute or another. Now why would that be?

This article has 19 comments