Every culture has to deal with its “thing” – a question or problem that pricks at the conscience of a people – at one point or another. China has Tibet. India has rape. America has racism and hypocrisy. Ghana has filth.

Let’s just face it: Ghana is a pretty nasty country.

We can boast all we want to about our work ethic and that we are “the friendliest country” in Africa. We can even hide behind the hem of Osagyefo Kwame Nkrumah’s political suit trousers and thump our collective chests about how we were the first Sub-Saharan nation to gain independence or to build the first motorway in the region. All that is true, but it doesn’t negate the horrific reality that is Agbogbloshie the world’s largest digital dumping ground, or the veritable cesspool that is the Korle Lagoon, or the mucky mess that are now our beaches.

Everywhere you look there is trash all over Ghana. The slopes of my beloved Akuapem mountains are covered white with cellophane, scrap material and paper. You can hardly get to a holiday destination in the country without cruising through a small village or town that has become a dumping ground for metropolitan waste. And good heaven, don’t let it rain! Accra and its suburbs become flash flood zones. An acquaintance of mine drowned when he tried to navigate one of the huge drainage gutters in the city. He was swept away in a rip tide of human waste and sewage.

You wonder where it all this spilth comes from, and before you have a chance to form a theory your father careless tosses a Pure Water sachet out of the driver’s side door or a child drops a Fan Yogo wrapper on a foot path as he scampers off to catch up with his friends. This scenario is repeated all over Ghana millions of times a day. Coupled with the fact that the country does not have the means to dispose of waste responsibly, this mindless and careless attitude toward littering has been a death sentence for our environment. And like anything that makes its way into our earth and water source, trash makes its way up the food chain.

The majority of Ghanaians eat food that is contaminated in some way, every day. I recall the horror I felt when a friend of mine disclosed that the extended silence between us was attributed to her having contracted typhoid fever after eating some locally grown lettuce. As I child, I remember one “farmer” that lived not too far from our neighborhood who would nonchalantly scoop water from a nearby gutter to water his lettuce and cabbages. It was revolting. It is also something small scale farmers do all over the country.

As parts of West Africa deal with an ebola outbreak, Ghanaians have a different plague of our own to contend with: cholera.

“Isn’t cholera something that war torn countries and failed states have to deal with?” someone on Twitter asked.

What’s the appropriate response for that? Do we then have to admit Ghana is a failed state since we have no war to blame this scourge – a calamity of our own doing – on? With the cedi in a free fall and the IMF setting our nation’s agenda, that’s not something I particularly want to contemplate, let alone admit. I’d rather focus on what you and I can change.

As the ALS Ice bucket craze challenge winds down, more people are turning to ways to use the same idea to affect change in their own communities. India’s celebrity core has initiated a Rice Challenge to fight hunger. Potable water is as scarce in India as it is in Ghana. Never mind the fact that our electricity supply is so erratic that it would make little sense to waste your precious cold water by dumping it on your head. It’s hot in Africa. We drink cold water. We don’t waste ice block! The point is, the ice bucket challenge was a gimmick, but it worked… 88.5 million times.

Would something like that work in Ghana? Only you or I could say. 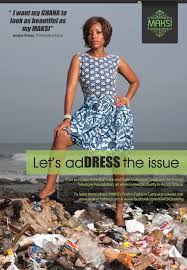 Now, before I go any further, I want anyone reading who thinks Ghanaians as a collective enjoy living in filth and that there have been no previous efforts to clean up our environment or our attitudes about it to disabuse themselves of that notion right now. In 2011, Joselyn Dumas teamed up with the MAKSI fashion label to launch a campaign aimed at addressing the issue of waste in our environment. Golda Addo and Akua Akyaa Nkrumah have also worked consistently and tirelessly towards promoting a Green Ghana. What these women and other individuals need is our support as a nation. They need us to be educated on the issues that affect our nation’s health and sanitation so that we can help spread the gospel of cleaniless. We don’t need Bono and Bill Gates to save Africa from malaria; we just need to stop creating breeding grounds for mosquitos and harmful bacteria. More importantly, we need to stop accepting the world’s digital trash. What does Bill Gates have to say about the mounds of PC shells and guts cluttering our landscape, I wonder?

I’m not certain who coined the hashtag #FilthCleaningChallenge, but it looks like it originated with @Rafurl. And while the challenge is not an official “thing” just yet with official rules and the sort, I have decided to take my own steps to promote a cleaner Ghana. Therefore I have appointed The Green Ghanaian Initiative the “charity” of my choice  and will be donating towards their cause to educate the masses out how waste and filth are making the lives of ALL Ghanaians unnecessarily more difficult. And then I’m going to pick up the beer bottles that my neighbor left on the road and toss it into a nearby dumpster. Should I do a video? Why not!

Do you have a green campaign you support? Share them! Is trash a scourge in your part of the world? To get an idea of just how bad Ghana’s waste management problem is, watch this video presented by Araba Koomson.