*Note: I’m just asking a question! And yes, I do understand that this query is akin to the “pull your pants up and you won’t get shot” argument – but don’t get all catawampus before we’ve had a chance to talk about this now!* 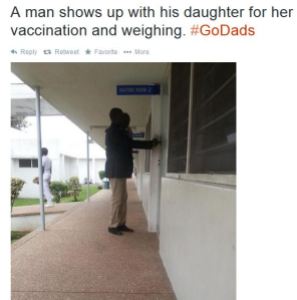 This morning somebody –and I’m not saying who – posted this picture of a father and daughter on twitter with the hashtag #GoDads. It was pretty innocuous in my estimation, but a small cadre of women took some level of offence to it. To summarize, they said it was a “look and clap for me move”. My husband agreed, and said it was rather narcissistic. A man who has fathered a child shouldn’t be trumpeting about this small accomplishment when he has a duty as a parent to ensure his child’s welfare anyway. I agree with my husband’s sentiments and those of the group of women who felt an aversion to this post, however, I do understand the spirit in which the post was made.

The unknown father and daughter in this picture are at a clinic in Ghana. Ghanaian fathers, like the majority of African fathers are not known to be hands-on when it comes to parenting. They are providers and disciplinarians, and that is generally where the concept of Ghanaian fatherhood begins and ends. Of course, we have to give room for outliers like my own father, who told me that he didn’t want to be the type of dad whose children run from when from him there is news that’s he’s home. I’ve visited homes where this was absolutely the case. Daddy comes home, the kids would courtesy or salute, parrot their evening greeting to their father and then disappear. The picture referenced above says to me that there is a new vanguard of fathers who want to change this perception or reality.

In the course of the conversation that quickly became male vrs female, one of the respondents asserted that the only reason gender roles in Ghana haven’t changed is because women haven’t allowed them to. He gave an example of a man trying to wash his own bowl and being chased away by a woman. Sadly, I can see that happening. On Adventures, a reader described to her horror how her own sister facilitated archaic gender roles in her home. Her sister had a daughter and a son, both close in age. One afternoon her son said he was hungry, and his mother called for his sister to go make her brother noodles in the kitchen. Our reader stepped in, grabbing her nephew by the hand and firmly advocated that he be taught to make his OWN noodles; after all, boys are just as capable of cooking as girls are. 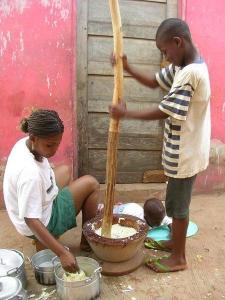 Let’s pause and think about it. How many times is this same scenario repeated in some manner all over the country? We stop girls from climbing trees because girls don’t do that, or we tell boys they can’t help in the kitchen because it’s not done. Even when it comes down to something as mundane as pounding fufu, it’s expected that the boy will pound and the girl will turn. And if we’re completely honest, it’s usually women enforcing these gender roles.

Can we then be justified in our vexation when we find ourselves locked on the outside of parliament and boardroom deals when members of our own gender have socialized our boys-now-men to think that there are some things the female gender can’t do? At the same time, members of our own gender have raised us to believe that men just aren’t capable (or can’t be trusted) when it comes to the day to day matters in raising children. We mock men when they put on the baby’s diaper backwards, or make the formula too thick (or not thick enough), or sniff test a dirty pair of trousers and hastily put them on a child before sending him on stage for the church play because Dad didn’t think to set the clothes out the night before.

Kinna Likimani recently hosted a conversation surrounding gender issues as they relate to women in Ghana. One of the panelists made a poignant remark, stating that if we are going to get anywhere, we have to change certain cultural norms that are harmful, even if it means doing away with some traditions that people hold so dear. (Or hold on to for the privilege of power.)

If we are going to be serious about eliminating gender roles and bulldozing obstacles to a level playing field, we are all going to have to get comfortable with the concept of men doing certain “female” tasks and not just charging to the rescue when things have reached critical mass. This includes men functioning as stay-at-home-dads and working part time; bosses making an allowance for dads to be the first on call for when there’s a problem at school (I still don’t know why I am the FIRST person the school calls when there is a problem!); and a general expectation that men are just as responsible for the way his child turns out as a woman is.

What is the first thing we all say when a child acts out in public? Go ahead…say it with me:

Chile, where is your MOMMA??! She ain’t give you no home training, did she?

I Asked My Daughter If There Was Anything I Had Done As a Parent To Cause Her to Resent Me. Her Response Confounded Me.