CNN – who is looking more like a better-funded version of The Onion where African is concerned – posed a question about Ebola recently. We mocked them and called them all sorts of ghastly names for their query; names that rhymed with “idiots”. (Idiots rhymes with idiots, doesn’t it?) But since they say the only stupid question is the one that doesn’t get asked, the prompter guys at CNN went balls to the wall and lead with this static query on their screens:

You read that right. Ebola: “The ISIS of Biological Agents?” 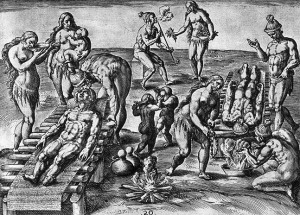 To be fair to CNN, human bodies who have contracted diseases have been used as biological agents, so their concerns aren’t completely invalid. It’s been done before. Early white American settlers donated blankets to Native Americans riddled with small pox in an effort (a successful one!) to eradicate them. I was half watching the History channel the other night and I saw where Genghis Khan threw some bodies infected with the bubonic plague over a wall of a town he was trying to conquer and sickened all the inhabitants. When he finally broke through, women scurried up to the top of the wall and flung themselves off it. Rather than choosing between Genghis rape and the plague, they opted for a horrible, agonizing squishy death.

So yeah, Ebola COULD be the ISIS of bio-agents.

But if it is, who’s behind it all? What country is responsible for this? Surely not the Africans. They are all so poor and have no running water or shoes. All the same, members of the media have called for all flights from Africa International Airport to be halted in hopes of curbing Ebola’s spread into America. Could it be the Germans? Noooo…We’re friends now! Never mind that whole recent tapping of Chancellor Angela Merkel’s cell phone fiasco. And never mind that she used to be a research scientist before she became Chancellor of one of the most technologically advanced nations on earth…

Nawl! Angie wouldn’t do that to us.

I put it to you friends, that we are overlooking the real culprits here. We’re overlooking them because we have no reason to suspect them! Oh, they look innocent enough, but they’ll rip out your guts from neck to navel if you get too close. I’m talking about the apes…and the crocodiles, and snakes, and deer, and all the other animals we humans consume as “bush meat”. Basically, any animal not living in a lab or a farm deserves our mistrust. The animals are taking over! We have just refused to see the signs!

Have you ever seen or heard of a chimp or an ape dying of Ebola? NO. No you have not. But you HAVE heard of humans (unless they are white American missionaries and doctors) dying from the virus. This is what was missing from the plot of Dawn of the Planet of the Apes. THIS is why the whole thing makes sense! Oh, you think I’m cracked, do you? Humph. It is because you are willfully deaf and blind to all that is around you.

Humans have had their time ruling the Earth. Now, it’s the four-or-more legged creatures turn. No one really knows how the apes took over, how they got all that fancy knowledge and space-aged gear; except we DO know! The bats, alligators and primates all got together, went through some weird evolutionary mutation thing, and gave us all Ebola.

The rats did it in Europe too.

The bible says the meek shall inherit the earth. That is the gospel. Who is more meek than a mouse? You think Disney has been making talking mice and ducks for 60 years merely because it’s cute? No! It’s because the franchise has been preparing us for a new world order, and order run by Mickey n’ Dumbo n’ King Luis n’ dem.

Gasp!!!! King Luis! Remember from Jungle Book? He was so treacherous. I bet King Luis had Ebola too. The only reason he didn’t give it to Mowgli is because the lad was a vegetarian.

So there you have it. The vegetarians and the animals will rule the Earth.

Look for Ebola: Rise of the Planet of the Quadrupeds in a Kumawood theater near you. There will be parts 1 &2.