I have been advised in the past to carefully consider the things I say and to determine whether they are necessary. I sat on this for three days and have concluded it needed to be said. Let me lead with this: Some of you need your wombs destroyed, so that you cannot further contaminate the earth with your brand of idiocy. You are literally setting humanity on a course to destruction, and enabling the imminent primate take-over with your refusal to elevate your thinking.

There is a pecking order on the Scum of the Earth scale. It’s different for every individual. Some people cannot abide politicians, used car salesmen or snake oil peddlers. For other’s still, I – with my disdain for con artist pastors who misapply/misquote/abuse the verses of the bible to suit their personal views and agendas – may represent the scum of the earth. Everyone has their non-negotiables and un-abidables.

My list consists of the following in this specific order:

Number three on this list is a recently added item on my scum scale, as I had an inkling that these women existed, but never had any proof. Ever since I wrote that post about the vile utterances from the Archbishop Who Shall Remain Unnamed, this brand of slime for sense came oozing out of the woodwork and pooling into the comments section. I was shocked, dismayed and eventually disgusted. I have never seen a group of women so invested in their own destruction as this lot, and though I am underwhelmed by their logic (or lack thereof), I somewhat comprehend why they exist in this state.

A few months ago, maybe even close to a year, some members of the African feminist cadre were having a chat on Twitter about a woman who was the recipient of a monetary award/loan from a feminist organization to. The money was to be used to burgeon an enterprise she had begun – basket weaving or shea butter processing. I don’t remember. I followed the conversation with keen interest until its conclusion. In the end, the woman ended up giving the money to her son so that he could leave their village and start his own enterprise in the city. I was dumbfounded.

She was a silly woman, said I, and a patriarchy enabler.

The feminists piled on quickly, saying I should not be blaming the victim (the mother) and that I was being unfair in my assessment.

Now, I had no business dipping into their mentions, so I apologized and informed them I’d see my way out. Besides, how could I really make my case in 140 characters? Anything of meaning was bound to get lost in translation.

The point is, this mother in question is part of the problem where women’s rights and perceptions about women are concerned. Her actions, though I’m sure were borne of love, only go further to cement misogyny in our society. First of all, she used the loan dishonestly. The money was meant to increase HER business, not to buy tickets and pay for lodging. Second, she willingly put herself at a disadvantage by remaining stagnant in her business endeavors or possibly even risking setting herself back. Finally, she sent a message to her son and anybody else watching this interaction. That message was “I have more faith that you as a male will execute better business acumen with this money then I will. Remember your mother when you make it big.”

Wouldn’t it have been a more powerful message to grow her business, increase her profits, and then set her son on his way with a personal load from her eventual gains? That is what a strong minded woman who believed in herself would do, but the problem is Africa – or in this case Ghana as I am referring to a select group of women I have recently come to encounter – is not populated with strong minded women…and they are willingly giving their power away. 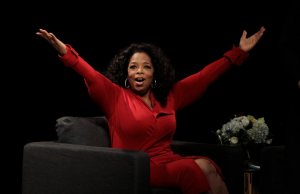 There is no way I will ever allow any woman or girl in my circle to receive messaging that says that their intelligence untethered to a man will lead them to rot, or that their lives are meaningless as females without marriage. That’s preposterous messaging of the highest order. You mean to tell me that someone like Wiyaala, who has given back to her own community in several ways and is affecting performing arts in Ghana is rotten? Or that Nana Darkoa who has built a house with her own income is decayed? Or how about the empress of all single, childless women: Oprah. You really want to compare her standard to the woman who opted for a convenient marriage just to appease her family/society/church and is living a marginal life and contemplates suicide at least twice a month? But there are women who do, and do it with utter vehemence!

I understand them though. These are girls who have grown up believing they are not smart, that they are not capable, and more importantly, are not complete on their own. These women are godless servants of Lucifer. They have a form of holiness and no power therein. How dare you insult the work of the living God? You were fearfully and wonderfully made, and now you have relegated yourself to the status of a man’s trinket. House, car, wife…that’s where you fall on his list. Swine.

These women seem harmless enough, but they are a cancer. They are a disease being spread to the next generation, and they must be rooted out and neutralized!

A key part missing in the conversation about women’s issues is the issue of the mind. Misogynist messages and patriarchal patterns dominate global culture, and I am of the opinion that it is only because too many women have allowed it to be so. Women’s organizations have thrown money and resources at the issues plaguing the female populace, but how much time has been invested in changing women’s thinking? This is the only way to win this war against women, and that’s by destroying any notion that a man is altogether better than a woman, simply because she lacks possession of a penis.

I Have Lots of New Goals For 2022. How I Plan to Pave My Road to Success With A Series of Robust “Hell Nawls”

This article has 12 comments