Some dude a long time ago once said “There is no greater love than to lay down one’s life for one’s friends.” I believe that to be true. It’s the reason grown men are reduced to blubbering, weeping heaps following strategically choreographed scenes in football and war movies. Remember when Chappy died in an aircraft explosion in ‘Iron Eagle’? He sacrificed his life so that Doug could save his dad. It was devastating, heart rending, and moving. Fortunately, Louis Gosset Jr’s character also doubled as the Magical Negro, so he popped back up from the dead at the end of the movie, fresh as a daisy.

Outside of the silver screen how often do we get to witness acts of true, selfless love in real life? Can you recall the last time you witnessed an act of true love? This summer, I was fortunate to be in a front row seat to observe such a phenomenon…and it was absolutely terrifying.

This summer my Somali friend Ameera* brought her girls over to our pool for a swim. Aisha and Aaliya are Nadjah and Aya’s best friends, which makes Ameera and I BFFs by extension. (It’s part of some motherhood code, I’m sure.) 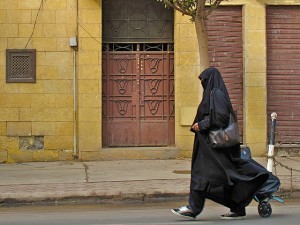 Ameera’s coat was similar to this one.

Ameera’s daughters are the sweetest, skinniest things you’ve ever met. Clad in their hijabs and modest swim wear, the girls looked around to make sure there were no prying eyes before they dove into the pool. I cut my eyes at a group of brown-skinned, mean girl teenagers who hopped out of the water as soon as Aisha and Aaliya jumped in, grunting their disdain and muttering words about the family’s attire. Ameera had on a brown and black hijab and a black overcoat.

“It’s too hot for alladat,” one of them snorted.

If I could have kicked her teeth in, I would have. This is the same breed of micro-agression that Black people have fought against for decades: White people leaving establishments when people of color walked in and so forth. How far we haven’t come.

Ameera and I took the time to catch up on our personal lives. Although we’ve known each other for years, our relationship has consisted of “hellos” and “have a nice day” for almost its entirety. We talked about how we got to America, how education was so different here than back home, and our plans for our respective families. She had her eyes hawkishly fixed on the pool.

“Aya is such a good swimmer,” she complimented.

I thanked her, but told her it was not my doing. Although I had paid for lessons, it was Aya who had put in the real work. Nadjah was too afraid to get her hair wet, which is why she huddled near the edge of the pool.

“The only reason Nadjah is being more adventurous is because your girls are here,” I informed her. It was my turn to compliment her kids as well, so I pointed to her eldest and said.. “Aisha is really good in the water!”

“Yes, but she takes too many chances,” Ameera said with exasperation.

No sooner were the words out of her mouth, I saw two little hands flailing from beneath the surface of the water from the center of the pool where the water was deepest.

Ameera was in the water like a flash of 200 lbs brown lightening. Still dressed in her modest clothing, she sprinted along the pool’s floor, grabbed her struggling daughter and pulled her to the surface. Meanwhile, I was running along the pool’s edge, my mind clouded and wondering what to do next! Ameera emerged from the water, drenched and hijab still intact. She hugged and scolding the shivering child at the same time. Finally, she released her into the company of her friends.

The girls nodded obediently. We were still in awe by what we had witnessed. Ameera was muttering to herself in her local language, peeling off her coat and head covering so that she could give them a squeeze and hang them to dry in the summer sun.

“Ei. Ameera, I’ve never seen anyone move so fast!” I gasped in admiration. Suddenly, I was gripped by terror. A vision of how the pool scenario could have played out differently hit me. Given the conservative upbringing she described earlier, a thought occurred to me. “Can you swim?”

“No,” she replied curtly.

She answered my unasked question with emotion choking her throat. “I love my children SO much. Of course I will jump in the water to save them.”

And that was all there was to it. Love – true love – makes you do crazy things.

Have you ever seen such an act? Or have you ever put your life on the line so that someone else could have a shot at survival? Was Ameera a fool to jump into the pool without thinking? Discuss! ↓