Like many people around the world – not just Americans – I haven’t know what to make of the Cosby rape allegations. Bill Cosby is not just a folksy American icon: he is (or was until 2 weeks ago) a universal Black treasure. Some of us may have not liked the way he talked down to us in regards to education and fashion preferences, but deep down inside, we knew he was right. Yes, perhaps I should invest my money in books and educational toys instead of these $100+ Jordans for my kid. But did you have to be such a douche about your suggestion, Dr. Cosby?

Those of us in The Community (like Cornel West) who took issue with Bill Cosby’s superior attitude towards Blacks made our grumblings on any new network that would provide space to allow for disagreement with his pronouncements. Those spaces were few and far between. I mean, who is going to disagree with the wholesome and loveable Bill Cosby? Plus, the majority culture LOVES anyone – a person of color in particular – who crusades for the cause of absolving them from the part that they’ve played in creating and facilitating poverty and disenfranchisement among Blacks, Latinos and the ever ignored Po’ White Folk who cluster in the Appalachians. In time, Cosby would become an even bigger hero to them than he was to us. He was their personal Uncle Ruckus.

Then the rape allegations began trickling in. And despite being the guard dog for White innocence, I have YET to see a White man stand up and throw himself on upon the fast becoming corpse that is Bill Cosby’s legacy in his defense. In fact, The Man is strategically dismantling his legacy, pulling his new show, refusing to air his syndicated programs on certain platforms, and inviting him to do interviews as though he were an oddity and not the icon he was just a month ago. I’m glad Maya Angelou is not here to see this sad day!

There are some people who believe that The Community (code for all Black folk) should stand in defense of Dr. Bill Cosby because, well…because we’re Black. One of these persons is Faizon Love. And if you’re asking yourself “Who in the name of good grits is Faizon Love?” that’s part of the point. Mr. Love is a prop used to embody all that is odious and underachieving in Black manhood. He is slovenly, barely educated and singularly gifted in the craft of abusing women. Perhaps more dangerously, he’s been paid an actor’s wage to play the part of the field hand in modern clothing giving his access and exposure to a broad audience. And last night, it seems as if someone gave him a kilo of coke and access to his Twitter account. It was like watching a star go nova. Prepare yourselves for the most coontastic display of niggery I have seen all year!

Read from the bottom up. 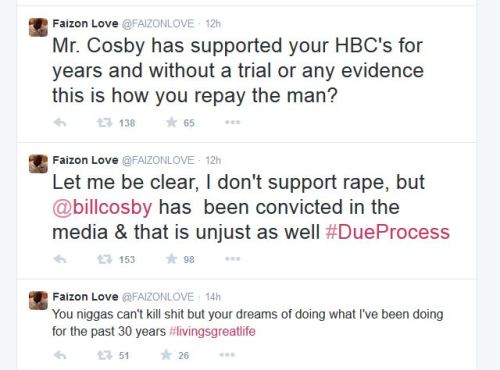 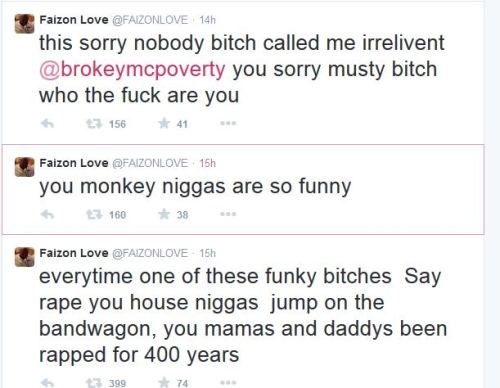 I couldn’t bring myself to interrupt his tirade as I shared it with you. I know the oscillation in emotion you experienced as you were reading this, for I share them too. Confusion. Anger. Fear (that Faizon’s brand of stupid is catching). Astonishment. Disappointment. These sort of things are best delivered at once rather than spaced out over time, like a beating or a blow to the face. In some of his responses to those twitterers who agree with him (who were thankfully in the minority!) he says that the reason the Black race is failing is because we’re not united. And he ought to be thankful for that, because this sort of yard jockery is not something I want MY Blackness associated with. If the race was indeed united, we would unanimously vote him out.

Furthermore, for someone who talks about unity among the race, he has used the words “nigga”and “bitch” more times than an intoxicated plantation overseer at cotton harvest and breeding season. Again, only the similarly mentally captive would want any association with this sort of underachievement. As one Twitter user pointed out: Even Bill Cosby himself would never invite Faizon Love to his dinner table. Faizon is the embodiment of all that Cosby abhors in the Black race!

To be clear, Faizon Love’s tirade has absolutely nothing to do with his support of Bill Cosby, but rather his delusional view that a woman’s body is for a man’s routine use and pleasure. Faizon Love himself was recently charged with the assault of a woman who rebuffed his sexual advances. Faizon Love is a pimple on the face of America’s pervasive rape culture.

At the end of the day, we may never really know what transpired between Bill Cosby and the 14 (and counting) women who have come forward with rape allegations. The allegations cannot be brought to trial, because the statute of limitations for prosecuting rape vary so vastly from state to state. In some states a victim has just 3-5 years to report the crime. For anyone asking “Well shouldn’t 5 years be enough for a woman to come forward?” ask yourself why it takes men even longer to gather the strength to report rape. Don’t delude yourself: men ARE raped, and with more frequency that we’re comfortable admitting. The process of dealing with the trauma of having one’s body so utterly violated has no fill by date. This is Jerry Sandusky all over again.

As we await E!’s True Hollywood report Bill Cosby: Behind the Puddin’ Pop , we must each draw our own conclusions about what we THINK happened. As much as I have loved Bill Cosby, I have to side with the victims. People like foul-mouthed Faizon Love are the reason so few rapes and assaults get reported. I am adding my voice to the chorus telling ALL victims that we support and believe you; and though it may be painful, we want you to speak up quickly so that you can get the justice you deserve. Don’t let rape apologists and our laws rob you of that.