Yesterday was Presidents’ Day, and like many stay-at-home moms across this country, I stayed at home with my kid. School was out and the older girls had come up with the wonderful idea to hold a mock election at home to see who would assume the position of “President for the Week”. As they busied themselves with poster making and decorating their ballot boxes, I realized that we were out of a few materials at home. We needed glue, cereal, shoes for Nadjah, a coat for Liya and Chick-Fil-a. The thought of driving around Roswell/Alpharetta and darting in and out of several stores with all my kids made my temples throb, nevertheless, I had put off purchasing these items for a week at least and decided it had to be done. Today.

I told the kids to put their coats and shoes on so we could head out, and locked the house door to a chorus of “YAY!!!” and “Where are we going Maawwmie?!?!” As I locked the door, I took a look down at my left hand, which was devoid of my wedding ring. I cringed and found myself confronted with another decision: Do I go back into the house and retrieve my ring and jam it onto my finger, or do I save time and energy and just leave without it?

I left home without it, but not before posting a quick status on Facebook about my decision.

You see M.O.M. Squad, I’m on this new diet, and one of the side effects for me has been puddling. I can literally feel the water puddling in my joints, and my fingers are no exception. I haven’t worn my ring in almost a week because it’s just that intolerable. Now, I’m going to let you in on a little secret: This can be a decision that comes with certain severe repercussions for Black women. Much like the young Black male who is “willfully courting danger” by leaving his home dressed in a hoodie and sagging jeans, the Black mother risks a particular set of repercussions for leaving her home in the company of her children sans proof of her betrothal, that evidence being the presence of a ring.

I’ve seen it happen on more occasions that I can count. The cashier or the passerby’s glance down at her left hand, the eyes roaming over the attire of the mother and/or her child(ren), the flash behind the eyes to quickly determine what level of respect this probable Welfare Queen should be accorded. I knew all of this when I left the house yesterday afternoon, but I simply could not bring myself to force the titanium and gold ornament my husband had given me a decade ago over my joints just to make other people comfortable. So out I went.

The first two stores I went into presented no problems. I shopped at Carter’s and Payless in search of clothing for the kids and struck out at both locations. Payless had tights on sale, so I snapped those up. The girls go through tights like Liberians go through rice. My next stop was Old Navy, and that was where the elements of respectability politics reared their ugly heads. As I walked into the store, my family was summarily ignored by the manager and the associate who were discussing a display at its entrance. I didn’t take offense, because I don’t always greet every customer that walks into the retail establishment I work at. No big deal. An associate way in the back was kind enough to point me to the clearance rack where I found a coat for Liya at a great price. The children were wandering the aisles – and not quietly – so I rounded them up and headed for the checkout lane. A woman with stringy brown hair and glasses sternly waved me over.

She looked at my face, looked at my children ooh’ing and aah’ing over the knickknacks at the counter, looked and my left hand, and wordlessly rang me up. I pointed out that jacket she had rung up was $24.00.

She continued to stare at me blankly.

She flipped the tag over and giggled sheepishly, repeating “oh, oh, oh” in mock embarrassment. I smiled as if to pardon her error.

As my children continued to play, she glanced over at them regularly. Again, I did not care. When you’re a Black person living in America, you become accustomed to a certain level of scrutiny and suspicion. This is why I enjoy visiting other countries so much. It was at that point that she called another customer to her counter – before finishing my transaction – as though to hurry me along. I saw the cashier look back at the customer standing behind me. The customer was wearing a khaki jacket and a burgundy infinity scarf. I saw her look at my left hand and smile and strange little smile. She and the customer exchanged knowing looks, at which point I began to stare them both in the face with my eyebrows raised expectantly. Was there a joke I was missing? Could I get in? For 15 seconds I did not break my gaze until the cashier asked for my email address.

“You guys already have it, but I’ll give it to you anyway.”

I finished up my transaction and left.

Some of you reading this who live in other parts of the world may not see the big deal in this encounter. If I was coming straight out of Ghana, I’d tell my present self to “get over it”. After all, it’s not that big a deal in the grand scheme of things, is it? Well no, Ms. Immigrant. In the grand scheme of things, it is actually quite damaging. These microaggressions – acts of unintended discrimination motivated by racism – are problematic and can be injurious to the recipient. After I posted my status, a friend of mine responded with this:

I was thunderstruck by her disclosure, though I should not have been. As someone who has had to be on WIC for a short while, I am very familiar with the looks of disdain that the seller flings at the customer when payment in WIC is processed. Women who are on government assistance these days are “lucky”. In my time, you had to separate your food items on the conveyor belt by those approved by WIC, present a voucher and THEN hand it over to the cashier. These days, it’s all done very inconspicuously on a government issued debit card so that it normalizes the transaction and gives dignity to the impoverished/unfortunate woman. Still, as my friend’s case reveals, that doesn’t stop people from assuming a Black woman with three or more kids must be on government assistance, does it?

The impact of microaggressions can be deadly. As I was contemplating my own brush with the phenomenon, I came across this post on the Humans of New York Facebook page: 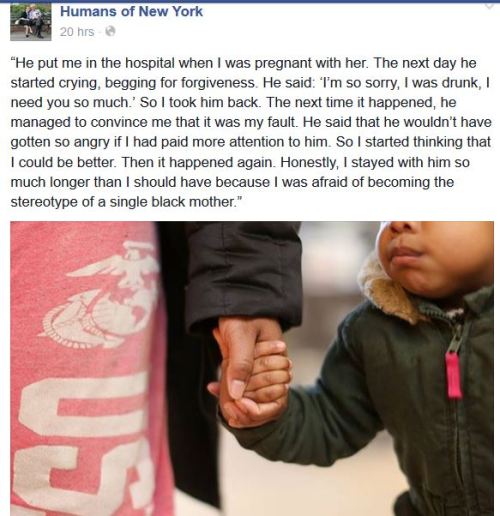 In this mother’s desperation not to be seen as a parasite on American society’s benevolence and peculiar standards (which is what single Black motherhood is in this country isn’t it? A scourge.) she kept herself in a potentially deadly scenario for the sake of fulfilling the norms of respectability politics. The messaging women of color, but Black women in particular, receive is “Well, at least you got a man to marry you! That should be good enough. Don’t be ungrateful. ” Meanwhile, a series of microaggressions and the accompanying messaging almost cost this woman her life.

Now, juxtapose my shopping the white woman’s experience. If she walks into Old Navy, it is assumed she has a nice house, a husband with a good job and is a frugal shopper who is doing her bit to save her family some money. No one questions a white woman walking into Old Navy with her kids and without her wedding ring. She may have taken it off while she was doing yoga or gardening. Maybe she’s even divorced and just trying to clothe her kids as fashionably and affordably as she can. Either way, bravo for her! We make assumptions about white woman/motherhood too.

I was humbled – and further troubled – when a friend of mine made this observation about my observation:

And isn’t that true? The average ‘real American’ would take one look at me while on an excursion with my children and make several assumptions about me, none of which would include a private school education, a bachelors obtained with high honors, or three books published.

Be honest. What do you see when you see a Black woman in public with her kids. What assumptions do you make about her? Do you have your thoughts formed? Okay, now consider your thoughts carefully.

You’re Dating a Man Who Cannot Afford to Pay His Child Support. Should You Pay it For Him?

This article has 6 comments