In 2012 I received an email from a good friend and mentor that completely blew me away. Those were the days when I was not averse to opening and reading chain/bulk emails, now a relic of the Internet’s past. The article was so biting, poignant and graceful in its delivery that I was compelled to copy and paste it without further addendum or comment on my blog. This was the sort of thing each reader needed to ingest and decode for his/herself.

I titled the article “You Lazy Intellectual (African) Scum” in absence of an original title. (I later learned it was originally entitled ‘Zambian Intellectuals are Lazy’, which is a much nicer moniker than the one I assigned the piece!)

Field Ruwe is the author of that piece that went viral within days. I suspect it was also shared widely within email circles as well, but once the blogging and online publication communities got a hold of it, it spread with ferocity. The article was liked, shared, reblogged and commented on thousands of times. EVERYONE was talking about Walter, the article’s protagonist, encounter with whom we assume is Field –or at least someone very much like him. Walter speaks the words that most Africans are too afraid to acknowledge in their hearts: that we are willfully submitting to being taken advantage of. Worse, he is unapologetic in his tone, as if seeking to give offense.

“I spent three years in Zambia in the 1980s,” he continued. “I wined and dined with Luke Mwananshiku, Willa Mungomba, Dr. Siteke Mwale, and many other highly intelligent Zambians.” He lowered his voice. “I was part of the IMF group that came to rip you guys off.” He smirked. “Your government put me in a million dollar mansion overlooking a shanty called Kalingalinga. From my patio I saw it all—the rich and the poor, the ailing, the dead, and the healthy.”

The sentiments in the piece were not universally received with happiness. There were several rebuttal pieces written, decrying Field’s supposed resolution that this is the way things “ought to be”, and for his not using his time to build Africans up, rather than tearing them down. Some folks were flat out offended. Others still saw the piece as spot on, and took it as a challenge to change the status quo. Others still were inspired to turn the piece into film, and for months there was talk about how/when that might happen. And then the chatter died down and as we humans do, we forget and move on.

Or so we assume.

Unbeknownst to the rest of the world, Field had collaborated with a young Kenyan filmmaker to bring this stunning think piece to life on the small screen. ‘Intellectual Scum’ will make its debut this Spring, and from the looks of the trailer, it adheres the same standard of excellent story telling as the original written piece. 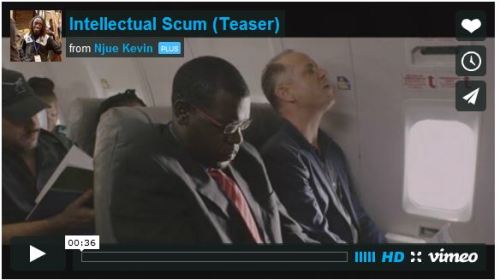 Njue Kevin, the film’s director will join me in a conversation about the creative aspects of the film, and will talk about how Field’s article impacted him. I hope you will be able to join us on Thursday February 26th at 11am EST/4 pm GMT on Google Hangouts (Link to join: https://plus.google.com/events/ckrop2mdsnbdmbmjikrrgm7h24c) Kevin and I want to hear from you too! Submit your questions and comments using the G+ Q&A feature and follow the conversation on Twitter using the HT #IntellectualScum.