Having children can greatly enrich your life. If you don’t believe that, just ask Mark and Rhea (who have chosen not to release their surnames to the public), who go by the YouTube username “ilovemaything”. They made $1 million just uploading videos of their kids Maya and Hulyan playing with toy trains. My son, Stone, is an avid lover and connoisseur of all things locomotive himself, and like his comrades Maya and Hulyan, has greatly enriched my life via his own interests.

And, no: This is not a story about how my family struck it rich through pursuing kid friendly pastimes. The boy was instrumental in showing me something new. 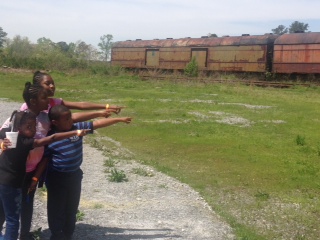 Marshall and I try as much as we can to expose the kids to real life events and situations that correlate to the kids’ individual interests. With four different people with four ever evolving fascinations, that’s a lot of exposure to wrangle. Stone will turn 6 this spring, but unlike his sisters he has maintained three main interests: cars, dinosaurs and trains. Trains are at the top of the list, and so it is for this reason and this reason alone our entire family found ourselves at the Southeastern Railway Museum in Duluth, GA.

It was fascinating. There was so much history! Even the girls thought it was a worthwhile excursion, and went as far as to thank their brother for suggesting the trip. (You have to see these people fight about how they’re going to spend the holidays to know how big that is.) 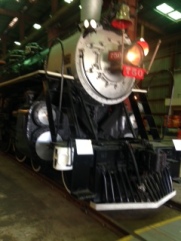 The museum does an excellent job of chronicling locomotive transportation in America, replete with decommissioned freight cars, cabooses, a luxury Pullman and of course, coal/wood burning steam engines. We saw street cars and trolleys dating back to the early-mid 1800s, as well as a functioning railroad handcar that anyone could ride for $1. As we climbed in and out of each feature, we found ourselves imagining what it must have been like to ride and work on the railroad. The cab of the engine would have been extremely hot, with the engineer and coal shoveling men sitting within two feet of an open furnace. Further back, aristocrats in fancy clothes would dine on fine china and sip tea while they debated the merits or follies of international commerce and whether women should have the right to vote. A little further back there would be a caboose carrying mail or food. The railroad wasn’t the lifeblood of America, rather it was a network of veins that made a prosperous life in America possible… and it was controlled an exclusive group of wealthy men.

Control of the American railroad was instrumental in winning the Civil War. When Lincoln cut off supplies to the South, that all but brought the Confederates to their knees. The railroad has also served as a reminder, as well as a facilitator, of class and racial discrimination in America. Nadjah casually wandered over to this sign hanging in a 50’s era cart delineating the Negro section from the white section and pointed it out to me. The cart connected ahead even had seats segregated by gender. What was I to say?

“It’s true. There was a time in America when Black and white people couldn’t sit together, by law. And it wasn’t that long ago.”

The next question came from Liya (aged 4). “Can they sit together now?” 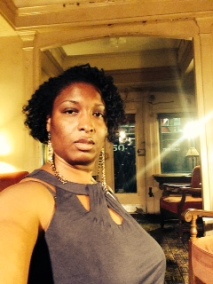 The attitude of the children turned solemn for a moment, and then they went back to racing around the outdoor museum, exploring its wonders. But of course, that got me thinking. What was it like for the variety of Black Americans who had to navigate this system? We are not a monolith, with the same experiences or goals or advantages, but my ancestors (and I feel like us today, even) had to endure a system that treated them as though all Blacks were the same. And by “same”, I mean subhuman. I looked down at the royal blue jersey jumpsuit I was wearing paired with gold sandals. I hadn’t meant to dress up that afternoon, and I admit I probably looked out of place at the grungy museum with my chandelier earrings and 20’s inspired hair. But I couldn’t help but imagine what the experience a woman – a Black woman – born into wealth who purposely got dressed up to ride the rails might have been like. I did a little bit of research when I got home and gasped at what I’d found.

First of all, not all Black people in America were slaves during the era of slavery. We know that. In fact, quite a few of them –particularly in Louisiana – were not only born free, but born into aristocratic families and intermarried (informally) with European men. Quite a few Creoles were slave owners as well. Slavery was the economic system and foundation for America’s wealth. Like ancient Rome who adopted similar policies, race-based subjugation was the springboard for America’s relative meteoric ascension. Before the Louisiana Purchase, Creole people were allowed the ‘benefit’ or participating in –and profiting from – this economic system.

Outside of that microcosm however, a wealthy woman of color would have found herself in an intolerant and intolerable world. Despite her finery and education, she would not be permitted to sit in first class. She would not be allowed to use toilet facilities on the train. She would have to lift her muslin gown and ease herself in the bush, with the rest of the Negro population. The rules would change for her the moment the wheels crossed into the true South. If she refused to comply with the rules, and regulations set out for her race and gender, the consequences could be dire.

Public humiliation for people of color has long been a tradition in America’s public transportation system. In 1882, Mrs. Walter Burton, the wife of a state senator from Fort Bend County (Texas) was thrown from a moving train for refusing to give up her first class seat in a whites only coach. Scott Bond, a fair colored Black man who could pass for white but refused to, talks about this in the book From Slavery to Wealth: The Life of Scott Bond. He discusses how on two occasions at least, he was asked to leave the Negro car to sit in first class with his “own race”. Hilarity does not ensue. On one of these two occasions, an exasperated and fearful Black porter calls for the conductor to force him to leave the Black section. An equally exasperated Bond asks the pair what they would have him do.

“The Law says I’m to sit in the Negro section, but you say I am not to! Who is to blame for this? Shall I cry out to God for an answer?”

The intersection of wealth and race (or presumed race) has never been a smooth or easy collision. These are just two of the examples I found on the internet about what it was like to travel while privileged and Black, and how that privilege dissipates depending on where you find yourself on geographically. Some of you in the MOM Squad are historians. I’d love it if you would share your knowledge about this with me. Have your grandparents ever talked about what it was like to work/ride on the train?

You can call me up, since you never leave comments. You culprits know yourselves. 😉