On Saturday morning I decided to take a break from my social media networks because I felt overwhelmed by all the news and opinions that were being flung from all angles. Mary, Kareem and Joseph, were there ONLY two issues going on in the world?

As one user put it: “My timeline looks like the confederate flag got into a fight with a bag of Skittles!”

I’m sure there is a more ‘civilized’ way to express my exasperation, but not one of you who truly know me believes that you come to MOM expecting me to exhibit the qualities gentility and/or decorum.

Anyway, I shut everything down – including the blog – (apologies to those who were not able to log on) for an unspecified length of time so that I could seek adventure outside of the virtual world. I do this at least once a year, but never before has it paid off in the way that it did this weekend!

I picked up my phone and scrolled through my contacts. Few of my friends live in Atlanta, and I was determined to use this sabbatical to hang out with someone I rarely get to interact with in person, but who is pretty cool online.

“What are you doing?”

“Ah ha. I see. Listen: I’m taking a social media break. I’m taking my life back to 1993…so I’m calling people to see if they want to hang out. You know – in person. Like we did when we were kids!”

The person on the other end of the call sounded appalled. She gasped. How could I have shut down everything?

“You know you can take a social media break without deactivating your accounts?”

“Yes, Tosinger, I know. But if I keep them up, I’ll be tempted to go back. Anyway, what are we doing to hang out?”

Tosinger, my lucky victim, informed me that she was going to be performing with Shola Emmanuel, a saxophonist whom she described as “big time” in Nigeria. She asked me if I would like to accompany her on Sunday afternoon. Not knowing what to expect, I laughed inwardly at the description of “big time in Nigeria” and I readily agreed. Do Nigerians ever do anything “small time”? 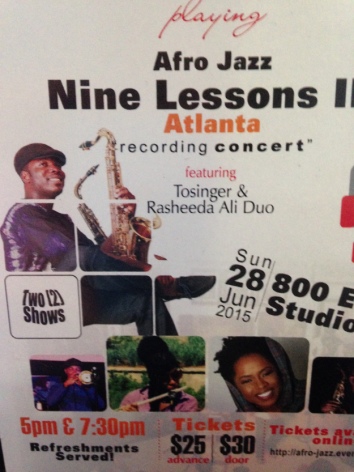 My knowledge of and experience with Afrojazz begins and ends with Fela Kuti’s ‘Best Best Of’ CD set, so it should come as no surprise that Shola Emmanuel is (or was) unknown to me. Adding that I live in Atlanta where Crunk and Trap are King with Soul/R&B vying for seconds in the spotlight, there are few opportunities to get live exposure to Shola’s genre of music. There certainly isn’t much broad appreciation of it; less than half of what it deserves. Shola Emmanuel is a genius.

Like all African functions (yes ALL), the concert began late, though it was no fault of Shola’s or his band’s. One attendee arrived at 9:30 pm, asking if the show was over! It was to begin at 5:30 pm. At 7:31, Rasheeda Ali Duo played a rousing version of an arrangement she had compiled, while Maya Angelou accompanied her in the background with a recorded reading of Phenomenal Woman. I for one had no problem with the late start to the show, because it gave me the opportunity to speak briefly with Shola Emmanuel about his craft and his foray into music. If I had heard him play prior to our conversation, I would have gone into unabashed groupie mode and been hardly able to form one coherent thought. The man is just that good.

“So, Shola!” I said with the familiarity of a long-lost friend or a headmaster interrogating a pupil. “Tell me everything.”

His eyes danced with amusement. “Everything?”

“Yes! How did you get your start in music? Can you play anything besides the saxophone?”

“Any musician can play more than one instrument.”

I could not tell if he was being smug or just stating something matter-of-factly. I gave him a side eye in response, therefore. Shola asked me if I played any instrument. I replied that I didn’t…I couldn’t.

“I just don’t have the capacity for it,” I admitted. “Maybe if I had training, I could but…”

Ugh. Now was not the time to divulge that I grew up under the economic duress of a Good Times caricature, and how my family’s limited funds could not afford me the luxury of music lessons, even if I wanted them. Nigerians don’t respect such people at all!

I would go on to discover that the quiet, unassuming man had been working and earning since he was 16. Shola Emmanuel is a true creative, in as many ways as the imagination can conjure. His uncle began selling Shola’s paintings and artwork in his gallery while he was still in secondary school. He then went on to take over the graphic design responsibilities of his uncle’s agency in Nigeria. He lives a nomadic lifestyle that has seen him settled in France, parts of the US and of course, Nigeria. He had always been musically inclined, so he turned his discipline towards mastering the saxophone. He wouldn’t tell me what else he could play, but I discovered that the piano was one of his conquests after I jokingly admonished him for not breaking out into some rendition of “Malaika” when I introduced myself.

“Do you want me to play it?” Shola asked with a half-smile.

What a question. Emphatically yes, I replied! Tosinger hopped onto the mic and then this happened.

Knowing that I couldn’t monopolize the attentions of the star of the show the whole evening, he begged his pardon and I released him with my gratitude. An hour later, the concert opened with Rasheeda, followed by Tosinger who sang Pata Pata, Summer Time and a song from her new album ‘Organically Singing’. Something about cracking snail shells and eating fireflies. The Shola and his ragtag band that he picked up around the city just that week took the carpet. Did I mention the concert was in a studio? There was no stage. It was intimate and cozy. You were so close to the music that you could feel every note – and every note was like a new friend. 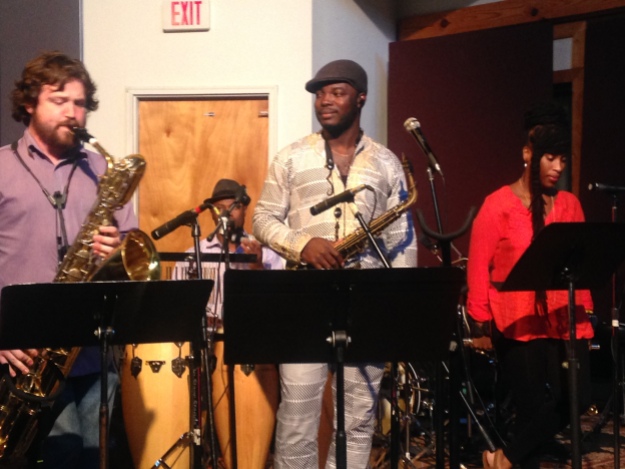 The concert was called Nine Lessons, but as Shola Emmanuel would confess towards the end of his fifth song, he did not like to give his audiences moral guidance.

“Telling you this is right, this is wrong…I don’t really like it,” he mused. “I have learned/heard that there are two tribes in this world: The Good and the Bad. You have to pick your own tribe.”

Gosh, I wish I had the vocabulary to explain what I witnessed that night. Sometimes, it’s hard to explain the feelings that music evokes in the human soul, in understanding that very song that night had been arranged in the head of a true genius who hears sound at a different pitch, and to have six other people read a musical composition and execute it with the tightness of an 18 wheeler parked inside the lines of your local Wendy’s. It was amazing. And that Shola. Hei! He oscillates through so many personalities when he’s on stage, playing like a man possessed, delivered and toying with fire again. 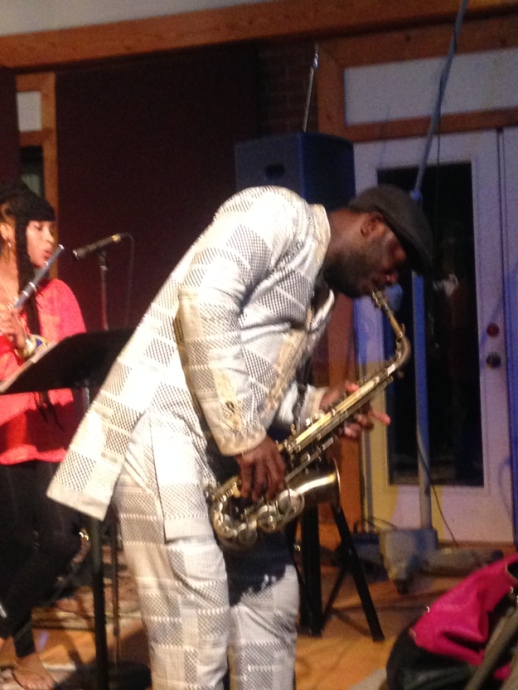 Shola closed the night by thanking everyone in the room by name, and culminated the performance with Fela’s ‘Lady’. It was tremendous fun.

If you live in the ATL and are feeling like you’ve missed out, never fear! As always, I am here to save the day. Shola Emmanuel will be holding monthly concerts for the short duration that he’s living in the city. You can email rhythmsax@yahoo.com for more information. Fellas: if you’re looking for new tricks and way to impress your girl, try something out of the ordinary and add this to your arsenal! You’re welcome.

I’m Not ‘Going Through’ A Midlife Crisis: I’m Pouring On Gasoline and Jumping Feet First Into That Bish