On Feb. 29, 1940, Hattie McDaniel took a long, solitary walk from a segregated table in the back of the Coconut Grove Hotel to accept her Oscar award for the Best Supporting Actress category for her role as Mammy in ‘Gone With the Wind’. She was the first Black actor in history to receive the prestigious award. The fact that she was allowed in the hotel in a capacity other than as a Black woman in service was a triumph and a feat that required no small effort, as Coconut Grove, like every establishment that catered to white clientele around the country had a strict ‘No Blacks Allowed’ policy. Although these establishments had no qualms with Black performers coming in to entertain their white guests, they were required to enter in through back entrances of said establishments, never permitted to stay on the premises as guests, and certainly were not allowed to use any of the facilities like the bar or lounges. Nevertheless, these Black performers were at least given the courtesy of having their faces and voices seen/heard on TV or radio broadcasts as they executed their craft from time-to-time.

In time, one of the gains of the Civil Rights Movement would be the end of segregation, allowing these artists freer access to private establishments and all their comforts.

Ironically, 51 years after the end of segregation in America, African artists are being shown the backdoor to receive recognition for their creativity and craft by Black Entertainment Television (BET); and what’s worse, these same artists are glibly gliding through the proverbial kitchen and galley for the benefit of a pat on the head from the guardians of this media outlet. This is not hyperbole or exaggeration: Every year, ever since the inception of the Best International Act: Africa category, African artists receive their BET Awards off stage, off camera, many hours before the larger televised ceremony. At least white folks let Hattie on TV to give her acceptance speech. BET hides the African element from the viewing public like it’s a bad rash. Many have drawn parallels between the treatment that African artists receive from BET and the Black American community at large and that which Black people themselves once received from openly racist white American society.

african americans are doing to us what their masters do to them…repatriates did same to indigenous liberians… https://t.co/3qacHmBzW5

If you are one of the many Americans who was not even aware that there was an African Artist category on the BET Awards, don’t fret. You are not at fault. It’s not well publicized in the least. The speculation for the secrecy is varied, but at the core, most people agree that it is because Black Americans – or at least those who consume the entertainment fare that BET offers – are ashamed of Africans.

I find this peculiar, especially since so much of what Black Americans enjoy and boast of culturally and musically has its roots in Africa. To that end, (Black) American entertainers have no misgivings about co-opting African styles and melody for their own career advancement… just reservations about showcasing it on television or radio.For example, the bassline for ODB’s ‘Ghetto Superstar’ mirror’s Brenda Fassie’s ‘Vulindlela’ note for bloody note. In addition to that, the entire genre that BET is built on – hip hop – owes a nod of gratitude to Africa as well. Simigwahene Gyedu Blay Ambolley has long asserted that he is the originator of rap and not the Sugarhill Gang who have been crowned with that honor.

“I am [the originator of rap] in the whole world not only Ghana. [But] if you go into the Guinness book of records they said that the Sugarhill Gang originated rap, and if you check the date, their date was around ‘78, ‘79.”

From fashion to music, Black Americans have long drawn inspiration from Africa. This is not to deny that there hasn’t been a trend in the reverse, especially recently, but the flow of cultural exchange has been trended heavily with Africa providing the influences. Lest we forget, the entire thrilling sequence to Beyonce’s “Who Run the World” video was choreographed by and originated with  lesser known Mozambican dance troupe, Tofo Tofo.

In light of this open secret, it can’t be denied that BET’s treatment of African artists is nothing short of appalling. Several artists have made their feelings known in the issue, including Fuse ODG and Whizkid, both of whom were nominated to receive awards, but who, to their credit, refused the second class treatment they were offered.

Dear @BET, the reason why I didn't come is because you give our awards backstage! You have no respect for our hard work and achievements

As usual, there will always be apologists for the poor treatment of Africans and as usual, they exist in blackface. One of such purveyors of this rubbish mentality is the disgraced, former “ace” broadcaster, KKD, who had this to say: 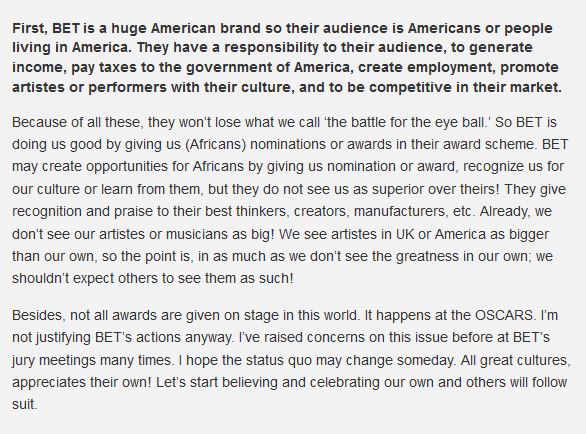 This is crap, because as anyone who follows pop cultural trends knows, the people don’t get to decide what they like: they have their appetites decided for them. From as far back as the Ed Sullivan show, entertainment moguls have long made it a point to individually bring ‘new and exciting’ acts to the viewing (and paying) public and thus direct their enthusiasms and tastes. That was how America was introduced to The Beatles, Ike & Tina and Nat King Cole. The public didn’t decide to make them stars: the industry did. If BET was really avant-garde and in the business of innovation, they would jump at the opportunity to introduce new acts to a hungry public in search of the next big thing. The BET Awards were established in 2001, and in that time, I have never heard of any other minority or ‘fringe’ group – be they from the Caribbean Dancehall cadre or cello-playing Esperanza Spalding – having to receive their recognition off camera just after breakfast or play to an empty auditorium because the ‘American public isn’t used to it’. You mean the kid in the hood can dig an American chick playing strings on a wooden box, but not an African guy rapping flawless in English? Which is supposedly more familiar to him?

What a stupid excuse. The American public wasn’t used to the Moonwalk either, but when MJ debuted it on Motown 25, it was one of the greatest moments in television history. How many possible great TV moments have been passed up while Stonebwoy, Sarkodie and Tiwa Savage have been grinnin’ n’ gigglin’ like grateful (segregated) African urchins backstage year after year?

That’s the point: these artists are not just some of Africa’s finest, but the finest musicians, lyricists and performers in the world today. They do not deserve this type of treatment, and they certainly shouldn’t be facilitating in their own dishonor. So that what? So that people who don’t see them as equals may (hopefully) come to recognize them as such? That they will in time get a “well done, thy good and faithful R&B songstress” from the likes of Diddy? This was the same mistake that African/Black Americans made with they traded the scraps of white mainstream integration for glory of economic independence and self-determination.

Do you remember Tiwa’s performance at the BET Awards? No? That’s because it was PRE-concert!

I hope that next year no African artist will voluntarily debase themselves by paying for their own airfare and lodging to go and pick up an award from a ratchet organization that is as invested in collective Black advancement as presidential candidate Donald Trump is today. BET is owned by Viacom, not your brother. Trust me when I say Viacom don’t give a rats a** about putting your Ghanaian one “on the map”.

Do you think it’s a good idea for African artists to participate in awards shows that treat them like second class citizens? Are the possible long term benefits worth this disgrace? Why/why not? Discuss! ↓

NB: Hi! My name is Malaka Grant and I write contemporary fiction, kid lit and romance. If you like my blog, you’ll love my books! Click  Books by Malaka and check out these great titles.