At the turn of the century, in the early 1900s when forensics was a fairly new science, there was an trend in and aspect of forensic photography that I found unsettling. I’m being modest. It’s not unsettling; it’s repugnant. All too frequently, forensic photographers – and sometimes even news reporters – would restage a crime scene in order to elicit a desired reaction from the public be it shock, horror, thrill or indifference. These manufactured reactions all serve a larger anthropological purpose: a gauge to determine how far certain elements in a society can carry out specific actions.

The restaging of a crime scene, particularly if it has been done at the hands of a trusted agent of our society, like a photojournalist or a police officer, presents the worst breach of professional ethics I can imagine. Admittedly, my bias has everything to do with my field of study and less to do with the nature of the moral breach. But yeah, whatever. It’s pretty a pretty disgusting practice in my books. That’s why the entire question of Sandra Bland’s mugshot and the nature it was possibly rendered has me quivering with rage, loathing and yes…fear.

Three people copied me on a story circulating on social media pointing to wide speculation that Sandra Bland’s mugshot was taken post mortem. There are alternate pictures juxtaposing her side-by-side, analysis of her pupils, scrutiny of the direction in which her locks lay. If she was photographed after she died, it’s a macabre notion indeed and one very hard to stomach, but I put absolutely nothing past the American militarized police force, especially in the South. The official report is that Sandra Bland committed suicide in her cell, a few hours before she was to be bonded out. There was immediately suspicion about this claim because:

As she lay in handcuffs, belly down on the ground, her own recorded words were that she could not wait to get this officer to court. That was enough for me to indicate that she would not commit suicide in her jail cell. When a Black woman “can’t wait” to do something, she won’t rest until it’s done. I don’t care if it’s a new weave or taking a dude to court for failure to pay child support or finally getting that college degree…we live, eat and sleep a singular “can’t wait” goal until it has come to fruition. (You’re laughing, but I’m so serious.)

Even though it’s hard to imagine that she would commit suicide, and I certainly don’t want to rob her of the right to her agency over her own life and body by saying definitively that the thought mightn’t have crossed her mind. After all, stories abound of Black women who chose to kill their children and then take their own lives, rather than continue through the oppressive horrors of a life spent in captivity in white man’s America.

Secondly, and more importantly, the trend of Black inmates dying in cells across this country and those deaths immediately being ruled a suicide is a longstanding one. In a follow up conversation we had about the possibility that Sandra Bland’s mugshot had been digitally altered and/or taken after the time of her death, my sister sent the following text: 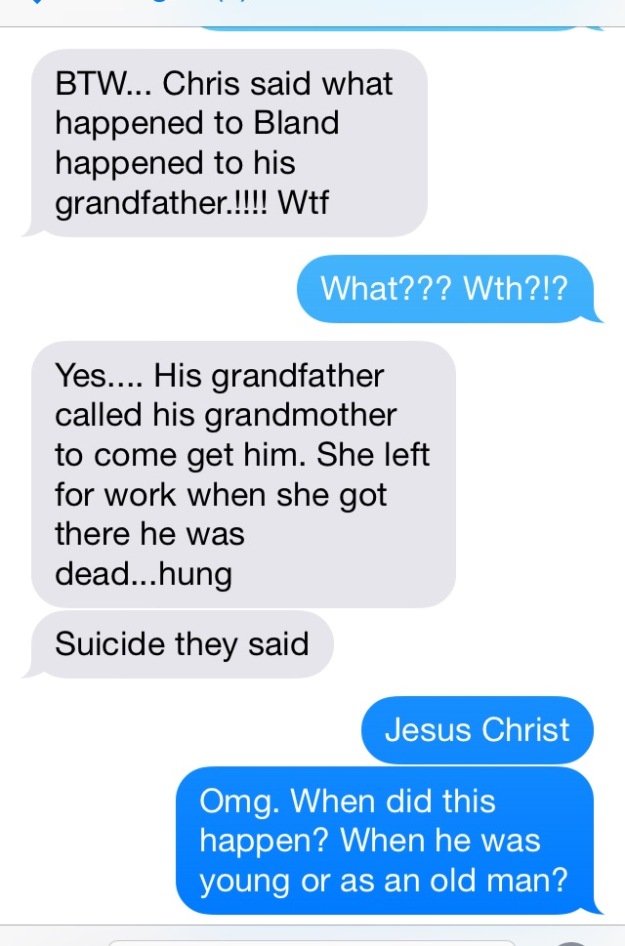 Yeah. You read that right. This was my brother-in-law’s grandfather.

In 1987, Assata Shakur wrote about this very trend in her autobiography. 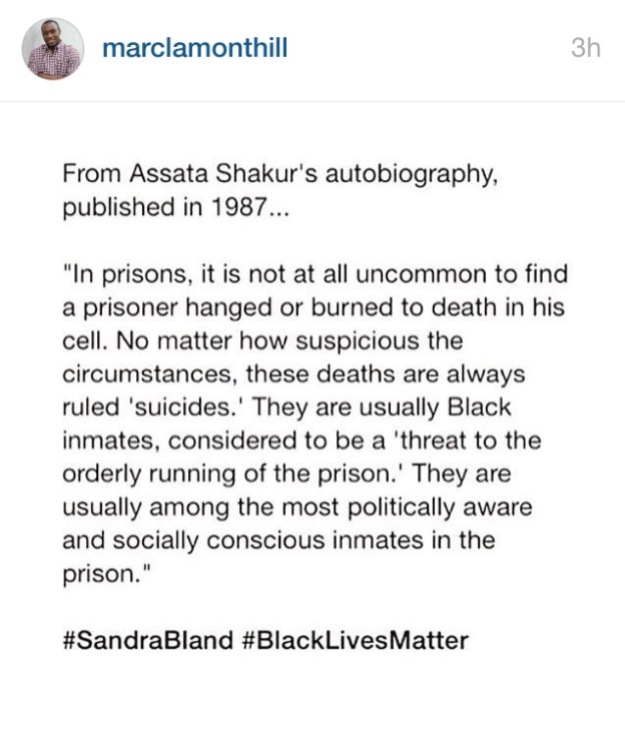 So what do we do now? Fortunately, we live in an age where there are hackers to hack hackers and film editors with a keen eye for editing. Ava DuVernay quickly pointing out the obvious edits in the released footage of the Sandra Bland video, which only points to more attempts at a police cover up. Similarly, I am hoping that the coding community can solve the problem with the photograph and put all our fears to rest. I’m relying on you techy-smarty-pants guys to tell me if I’m off mark here.

Remember back in 2001, when digital cameras were somewhat affordable and we began to do away 35mm? There were, like, sooo passé. Digital cameras were great! If you didn’t like a shot, you could erase it immediately and not waste film. But the first digital cameras also time stamped everything, and that was annoying. You’d go to print your pictures, and there in the lower right hand corner of your shot was the date AND time of the picture when it was taken. Remember? Ugh!

Soooo…did that technology go away? Did cameras suddenly stop storing metadata? I don’t think so. From what I hear, the metadata will tell you the time, date and the model of the camera used to capture the image. Would it then be possible to compare the mugshot’s synchronized metadata with the official date and time of arrest for an answer to this riddle? Now, of course, this would require access to the police department’s official, unedited version of the jpeg (or whatever backwater file format Waller County saves its stuff on), which would mean they turn it over peaceably or Anonymous gets to doing what they do for cartwheels and giggles.

In other words, if Sandra Bland died (or was killed) at 10 am and the picture was taken at 2 pm that same day, what would that implicate?

When all is said and done, I want to believe that the police department did not take the battered, lifeless body of a Black woman, undress her from her street clothes, redress her in a prison jumpsuit, lie her on the floor, angle her head, hover above her and snap a picture in order to prove she was processed “properly”. I want to believe that there wasn’t some sick necrophiliac taking pleasure in every sordid second of that encounter.  I want to believe that although it is a vile system, that white supremacist law enforcement would have at least that much human decency left in it. Nevertheless, it is hard for me to believe this, because not only does history tell me different, Twitter tells me different by the nanosecond. If I had a nickel for every time “Real Americans” and their soft shoeing sidekicks uttered the words “if she didn’t have an attitude, she wouldn’t be dead”, I’d be able to afford to take the entire MOM Squad out for BBQ chicken and ribs at Big Lou’s. It’s not quite reparations…but hey. Those are some good ribs.

So, what do you think? Could metadata solve the mystery of the mugshot?