Yaa Asantewaa, Queen Mother of Ejisu and holder of 157 other titles. If you don’t know her name, you must live in a Hobbit hole devoid of books or access to the internet. She’s part of the Sovereign Women’s Pan African Council; up there with Queen Nzingha and Queen Nandi and Harriet Tubaman n’ dem. And to hear Ghanaians tell it, she is the only woman in the country’s history to ever make a difference or exhibit bravery. 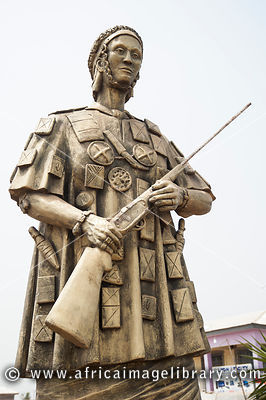 Of course, Ghanaians don’t ever say this expressly, but the implications during praiseworthy moments cannot be mistaken. Whenever a woman shows a modicum of valor or persuasively expresses an opinion that counters the pervasive culture, she is referred to as ‘Yaa Asantewaa’.

Yvonne Nelson led the #DumsorMustStop campaign and she was christened Yaa Asantewaa.

In reviewing Poetra Asantewaa’s soon-to-be-released EP, Mutherfuckitude, my best friend and troublemaker Wanlov Kubolor had this to say about her:

At times, the appending of Yaa Asantewaa’s virtue to one’s person is not always meant as a compliment. For example, when the police went on a rabid rampage against peaceful and unarmed marchers during the Let My Vote Count exercise last month, this was one of the many images to go viral. An individual I follow online tweeted contemptuously: Who does she think she is? Yaa Asantewaa? 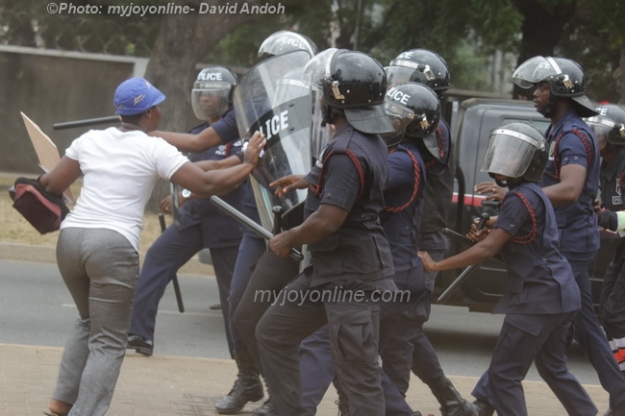 Interestingly enough, a quick search on Twitter will also find everyone’s least/most loved feminist on Twitter @Obaa_boni likened to this historical figure…and not always in the most flattering of ways.

Excuse me for a moment.

Obaa, did you know this, girl??? Do a search! Folk love to hate you. There’s some life out there that some folks need to get.

Pardon that segue. Anyway, as I was saying, because we have deified Yaa Asantewaa to this extent, it has only succeeded in lulling ourselves into the belief that she alone has and/or will ever embody the strength and fortitude a woman needs to agitate for positive change. Inherently, we know that this is impossible, but this is the narrative we’ve allowed to take root and thrive. This makes Ghanaian history “rich”, but it also renders it incomplete and therefore only partly true. We’ve allowed Yaa Asantewaa to become a messiah, and I don’t think she would be pleased with that.

Of course, she’s not the only firebrand in history we’ve turned into a mythical savior.

Nelson Mandela singlehandedly ended apartheid from the confines of a prison cell on Robben Island.

Kwame Nkrumah delivered Ghana from the clutches of colonialism with naught but a handful of speeches and a kente robe.

Malala Yousafzai was the only Pakistani girl to defy the Taliban in pursuit of her education and be shot for it.

It was Martin Luther King alone who ensured our civil rights.

The list – short as it is – goes on, and I’m sure if we had a contest, you could come up with a couple of messiah figures of your own.

It would serve us all better if we had the opportunity to learn more about who Yaa Asantewaa’s allies were. It would make the tapestry of our history so much richer. She was human. She was taking on the British army…a legion that had managed to do what no other conglomerate had managed to do before: subdue the Asante Kingdom. Who were her generals? Who did she confide in on those nights when she was preparing for battle? Who was her right hand woman? Certainly, there was an equally hot-blooded woman she had in mind when she stood in the council meeting and said:

Now I see that some of you fear to go forward to fight for our king. If it was in the brave days of Osei Tutu, Okomfo Anokye, and Opoku Ware I, chiefs would not sit down to see their king to be taken away without firing a shot. No European could have dared speak to chiefs of Asante in the way the governor spoke to you this morning. Is it true that the bravery of Asante is no more? I cannot believe it. It cannot be! I must say this: if you, the men of Asante, will not go forward, then we will. We, the women, will. I shall call upon my fellow women. We will fight! We will fight till the last of us falls in the battlefields.

Whenever I endeavor on a big venture – and I’ve never done anything as noteworthy as defy the world’s most savage, marauding forces to preserve my freedom – I’ve always had a cadre of women to support me in that. Behind every strong woman is an army of strong women pushing her ahead. So why have we allowed these women’s names to be lost to the point of erasure? The idea that women are catty and can’t cooperate is a fabrication meant to confuse and isolate us, and to keep us from collaborating for progress. Sadly, there are enough women around to perpetuate this stereotype.

There are times when I think about Yaa Asantewaa as she’s preparing for battle. She would have been surrounded by people helping her get dressed in battle regalia. She would have been receiving reports from spies and military tacticians. Someone took the time to prepare her a power-packed meal before riding (or running…did she have a horse back then?) off into battle to face the British. She would only be able to ride into the storm with the confidence that she was flanked by women (and men) of equal determination. Who did she cast her eyes over to and say:

“Yeah. I’m ready,” would be the rumbling reply.

I’d love to know their names.

Everything I’ve Come to Love About Makeup, I Learned From Sephora

The Utility of Rejection