On October 12th, most of America marked Columbus Day by shutting down all federal holidays and grieving parents with the closure of school. As a child, I loved Columbus Day. I was completely committed to the narrative that I had been sold by my elementary school teacher: That Christopher Columbus had sailed to America, discovered a new land (that was already populated, but only sparsely so) and settled it for the Europeans. Then, they had a great feast and invited the Native Americans to join them. The natives were poor and hungry and had never partaken of Honey Baked ham, you understand. It was their lucky day, the day Christopher Columbus arrived. Yes, sir!

Of course, I could fully buy into this narrative because we hadn’t covered chattel slavery and as a child, I identified with the noble frontier men and women and not the ‘savages’ who – seemingly unprovoked – took delight in shooting up my American ancestors’ caravans when ALL they were trying to do was settle and make a new life for themselves.

This is the attitude that many in my generation held. I feel sullied, looking back on the absurdity I was made to swallow as truth. Fortunately, my children will never have to struggle with the need to sanitize their psyche where Columbus Day and Native American – European colonialist relations are concerned. Not to worry! I have furnished them with enough facts about the true nature and horrors on which this nation was built that they’ll have to do an entirely different mental sweep of their own in 20 or more years. My children now harbor the same contempt for Columbus and his “achievements” that I do. When I asked them how they would like to celebrate the day, Nadjah replied – without hesitation – that she would like to burn an effigy of the Great Navigator in the back yard. After all, this was a man who said of the natives who welcomed, sheltered and fed he and his scurvy crew:

These people are very unskilled in arms… with 50 men they could all be subjected and made to do all that one wished.

I love that girl. 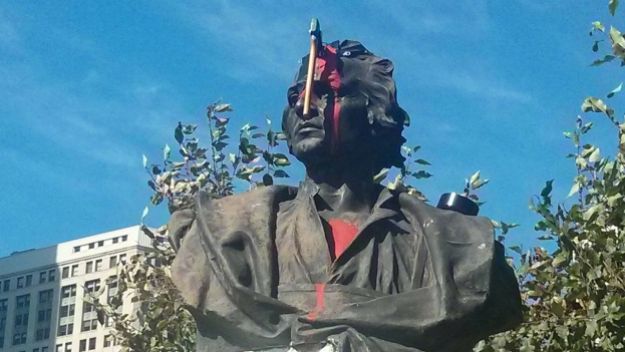 Things are escalating quickly! Someone put an axe through this bust in Detroit.
*image source: DFP

Many more people are taking a stand in opposition to Columbus Day and have taken the opportunity to celebrate it as ‘Indigenous People’s Day’ or ‘Native American Survival Day’. I think this is a step in the right direction; however, MX5 and I have concluded that Columbus Day ought to be abolished entirely. We’re just waiting for Congress to get on board. And if I’m honest, I don’t like the idea of retro-fitting Columbus Day with Native American accessories. It’s about as creative as a Baptist church choir’s futile attempt at “redeeming” a Beyonce ballad. Just replace Jesus with surfboard and voila! The image of a man skeeting in your face is supplanted by the magnificent shimmer of the Holy Ghost.

So as I was saying, we decided to mark the day by exploring some Native American history right here in Roswell, Georgia. It was absolutely the most depressing undertaking we’ve done all year. We visited the old Roswell Mill and hiked along Vickery Creek (now called Big Creek), which was named after Charlotte Vickery, a Native American woman who lived near the head waters of the creek. I discovered that the area we now know as Roswell was once called the Enchanted Land by the Cherokee Indians and that whites were prohibited from living here. A number of treaties were drawn up to protect the area and the white settlers – unable or unwilling to honor their word – broke them all. For a time, the Cherokee, Creek and Oconee tribes tried to get along with white people by adopting their customs. They opened shops for trade, their women dressed in gowns and some Native Americans even held African slaves. Nevertheless, the land and its natural resources would prove to be too valuable for white settlers to ignore and Native Americans would find themselves driven off their land and their property distributed to white settlers in a lottery.

The most influential settler in this area was Roswell King, for whom the city would be named. The fertile land and rushing waters from the creek would power the cotton mill he envisioned. In 1838, he began work on the first cotton mill and in 1839 it was incorporated as The Roswell Manufacturing Company. This is where history got Black: because where there is cotton to be picked, there are Black people.

Roswell King emigrated from Georgia’s east coast where he was affiliated with the workings of the Butler Plantation. The farm was a rice and cotton plantation and a veritable hellscape. It was a concentration camp. There wasn’t an atrocity on Butler Plantation committed that isn’t a part of slave life lore…and probably far more than we could imagine.

I once had the occasion to speak with one of Roswell’s few Black natives, a woman whose ancestors were brought here as slaves. Judging from her appearance, neither history nor the economy had been kind to her people. With her wild greenish-brown eyes and pockmarked skin, she looked every bit the caricature from a Dicken’s novel.

“Bey-bay, lemme tell you somethin’. My people is 100%, full Geechee,” she growled, glaring at me from the two feet that marked our distance. “If you wasn’t Geechee, Roswell Kang (King) wasn’t f*ckin’ witchu!”

The unnamed woman (who I made it a point to avoid in carpool from that day forward) was apparently very proud of Mr. King’s tribal preferences and proclivities. At first I was skeptical and dismissive of her claims. But now that I have learned more about the history of this area, I see their merit. If Roswell King did indeed re-settle from Butler Plantation, it would make sense that he would harbor a certain affinity for a certain “type” of African…one that was presumably pliable and easy to control. There were hundreds of categories under which Blackness was cataloged in that era, with white slavers holding preferences for one breed of slave over another. Igbos – it’s been said – were not desired “stock” because they were uncharacteristically defiant. That notion may have something to do with the mass Igbo suicide that took place on St. Simon’s Island.

Painting depicting Ebo Landing, where slaves chose death in dignity over a life in bondage.

I took time to reflect after our afternoon hike and was struck by how intertwined our paths and pasts are in general. My little corner of the world has so much global history woven into it, and it’s incredible. Roswell is a great city, but it’s sobering to have to accept that its roots are mired in blood, murder and tears and not the enchantment the natives held so dear.

How did you celebrate Columbus Day? Have you ever given any thought to the holiday and its significance?

Remembering A Friend For Whom The Rainbow Was Enuf

How Much Time Do You Invest Into Your Personal Development?

Sexting, Hook-Ups and Consent. Exploring Desire from a Pan-African Perspective