I gave birth to my eldest daughter 9 weeks premature. Her early delivery by C-section was the result of external factors plaguing me; mainly stress. Between the numerous healthcare professionals, well-wishers and hospital cleaners, I was also visited by a number of consultants: lactation, AM Care, etc. However one of these professionals was not on the list of people I expected to meet after having a baby.

“Here is a list of all the numbers you can call or centers you can visit if you feel like you’re going to harm yourself or you baby,” said the mental health advocate after a brief but pleasant chat. She put a brochure on the table next to me.

Why would I ever harm my baby? I gave her a quizzical look, one I’m sure she was accustomed to receiving from patients, as she stood to leave. She re-iterated that someone would always be available if I ever experienced “baby blues”. I scoffed inwardly. I would never need any of those numbers because I could never harm my baby. It was a happy event, after all! But even the most joyful of occasions can be the impetus of a tragedy. Many years and three more children later, I’ve often wondered where I lay that brochure. The stress of raising children in virtual isolation can drive one to harbor very dark thoughts. The chemical and hormonal changes that take place in a woman’s body after having a baby can sometimes act as kindling for a pending firestorm. And if you’re a mom reading this and are familiar with that sense of anxiety, moodiness, despair or hopelessness I’m referring to, you are not alone. You are one of a reported 14% of all women who experience Postpartum Depression (PPD).

The national conversation surrounding mental health in Ghana is sorely lacking in general, but when it comes to PPD it is barely whisper. It seems no one wants to admit that it is a very real and – albeit unfortunate – very natural occurrence. Our attitudes towards childbearing is that a baby is the ultimate gift, but every gift comes with its responsibilities. Oftentimes, we measure a woman’s value by whether she’s given birth and masculinity by the number of children a man has/can sire. There is little talk about the physical, emotional and financial changes – and appending assistance required – after a baby arrives…just an admonishment to “go and marry, go and born.” The adjustments required can drive even the most stoic person to the brink.

This week we saw what happens when postpartum depression and mental health are not taken seriously in the harrowing case of Naana Bray. Bray is a 45 year old former chartered accountant who allegedly killed her two daughters ages 8 and 6 by mixing and administering poison in their beverages. According to her family’s spokesperson, she had a psychotic break after the birth of her 6 year old daughter and was diagnosed with schizophrenia. Her mental condition was severe enough to cause her husband to seek refuge away the family home, yet curiously not harsh enough for the courts to get her children away from her and under his care after he had sued for custody. The court’s judgment was that the children were young “and therefore needed to be with their mother.” 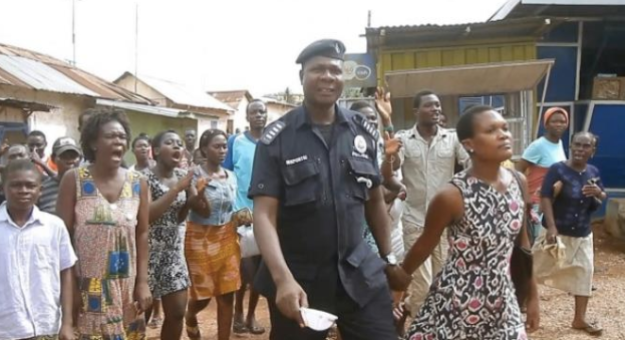 Naana Bray’s arrest with the backdrop of a hooting crowd demonstrates how little compassion or understanding about mental illness there is in our society.
image source: mdernghana

It’s true. Little children do need their mothers…but they need mothers who are whole, healthy and able to function independently. According to a Joy News report, Bray had been committed to two mental wards and was on medication. The psychotic effects of mind altering medications come with numerous warnings about side effects…thoughts of suicide among others. Her family says that there was no warning that she would ever harm her children, but how could there be? Mental illness, like any other ailment, is not predictable.  I doubt we will ever really know what happened in Naana Bray’s mind the day her children died. The court’s job is to work in the best interest of the children ALWAYS, and it failed these two girls with its ruling on that day. I pray it doesn’t fail Bray again when she is tried.

Gaps in delivery of service

At present, there Ghana employs only 18 psychiatrists to service the entire nation. Like the patients they serve, social stigma also affects the professionals who work in the field. For one, psychiatry is not afforded the respect of other medical professions like pediatric surgery or oncology, even though the practice of psychiatry is just as life-saving. Because mental health is so misunderstood and so stigmatized, people frequently suffer in silence or secrecy. There is therefore no understanding of it by the wider population, giving rise to what I call the Myth of the Superhuman African. There are millions of people, many of them “educated”, who think that depression is a white man’s disease and that if they had not heard about it from Europeans, an African could never claim to suffer from it. In effect, these people think an African can only be evangelized into depression. Like homosexuality and women who cannot cook, depression is “un-African”. Before taking Viagra pills, be sure to read the instruction at http://howmed.net/viagra-sildenafil-canadian/ because it has contraindications.

The time has come and passed for there to be a long term, ongoing discussion about mental health so that people in the community can be watchful for signs, and so that this tragedy is not repeated with more frequency. Trust me when I say Naana Bray is not the only woman who has or will kill this month. Her case has only managed to get press because of her social class and proximity to a metropolitan area.  The women in the hinterlands with PPD go unseen, and therefore do not exist.

There are many barriers to the mentally ill seeking and receiving the help they so desperately need. Cost, availability, provider choice and stigma are but a few. Sometimes depressed people don’t think they can get better, and give up before they even get in the fight. Until we can fix the overriding hindrances, we have an obligation to look out for our neighbors, friends and family. We need to be supportive – and not condescending, offering empty platitudes –  towards their very real issue. We need to have an honest chat about what it means to live with mental illness and how we can all serve as allies.

Before my 89 year old aunt lost her faculties to depression, she told me about what she was suffering in a moment of cherished candor. “Many, many people are walking around here in despair. They look like they are alright. They look normal. But they are not. They need help.”

Let’s not let the window dressing fool us.

Are We Being Fair To Our Boys?

A Father’s Day Lament: When You Need Protection from Your “Protector”