Ask any artist or person who makes a living from creative endeavors what their greatest fear is. Seven times out of ten, they will say it’s the terror they feel knowing that some faceless entity or individual will and can steal their work. It’s a personal violation that guts an artist to their core. The other portion of that fear is attributed to  a dread that they will not be able to make a living from their craft. The moniker “starving artist” doesn’t exist for nothing.

Last night, I witnessed a breathtaking theft of an artist’s original work. It literally stopped my heart. If it upset ME, I shudder to think what emotions the content creator – in this instance Peter “Poka” Asamoah – must’ve been experiencing. Have a look at these two images and see if you are not left speechless. 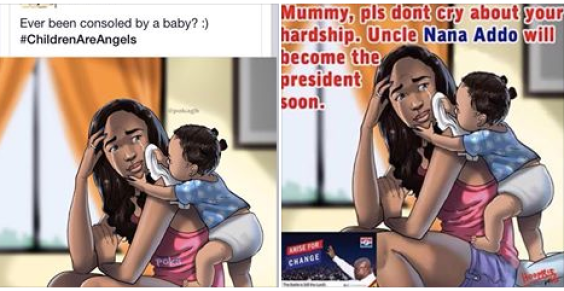 The culprit responsible for this a man named Kobina Gyekye Hooper, ardent Nana Addo supporter and CEO at Hoops Link Media HRLM Fashion Week who hails from Takoradi. In a gesture of fairness, I sent Mr. Hooper a message asking him to explain why he felt he had the right to steal, alter and pass off Mr. Asamoah’s work as his own. He has declined to respond. It’s bad enough that he stole what is really a brilliant and heartwarming piece of work…it’s worse that he memed it with garish colors and wretched grammar. Both the grammarian and design critic in me are vexed!

For the sake of transparency, allow me to inform you that Poka has illustrated both of my children’s books (Yaa Traps Death in a Basket and Sally and the Butterfly), so I take this slight against him personally. He’s a good and humble guy. He is a much sought after artist who has worked with Sarkodie, John Dumelo, the Ministry of Health and as I mentioned, me. You can’t beat the combination of his reasonable rates and the quality of work that you get. There is absolutely NO REASON that this NPP minion – Mr. Hooper – had to steal his work with the sole aim of advancing his chosen party’s agenda. To make matters worse, the image is now plastered all over the ‘I Am For Nana’ Facebook page with 256 shares and close to 1500 likes. That’s all advertising and exposure that has been taken AWAY from the original artist, Poka Asamoah. 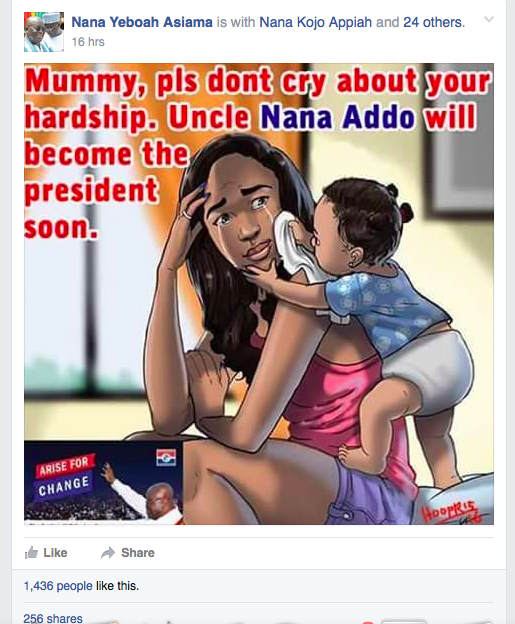 This is not the first time Poka has had his intellectual property appropriated. Just last month, an unnamed manager for the Instagram page of popular Nigerian musical duo, P-Square, also altered and posted Poka’s work, failing to acknowledge him as the originator. Notice the hearts where his trademark watermark used to be.

Again, neither P-Square nor their rep took responsibility for the theft or apologized to Poka for malicious act.

Fellow creatives: Look at these 2 images. How does it make you feel? Shd @PeterPsquare know better? pic.twitter.com/E3p5YEGLmG

Here’s the rub: When African nationals complain of having an unfair reputation for corruption (unless a government official or police officer is in question) I find it amusing and disingenuous. As expected, two people so far have challenged me on Twitter about why this act of plagiarism is a “party issue”, and wonder if I am not deflecting from the many sins of the ruling NDC party. Please. I am capable are far more nuance and objectivity than that, and those making these wild assertions should be too. This is about more than absolving the opposition from wrong doing or turning a blind eye to the way NDC has – and is – ruining the country. This is about integrity and about what Ghanaians ought to expect from Nana Addo and all who fly his party’s colors. It’s about the future. Just as the NDC are branded as brainless thugs by most of the populace for their propensity for violence, does the NPP want itself recognized as the marauder of the talents of the middle class and common man?

When you steal an independent, struggling artist’s work and pass it off as your own in order to further your party’s agenda, you are saying two things: That you have no respect and that you are untrustworthy. For instance, our Girl Scout Association has a set of rules that ALL Scouts are bound to. Paramount of these is an expectation that all Scouts will act with fairness, treat others with kindness and respect for others. When you meet a Scout, you expect them to be helpful and mindful of the feelings of others. This is their brand. What brand – what impression and legacy – are the supporters of Nana Addo creating when they refuse to acknowledge their wrong doing? Like it or not, this is a reflection on HIM, and he would do well to nip this in the bud now, advise his followers to be circumspect and honest, and if he’s that hard up for content, PAY Poka to do some original work for him!

This is the ripple effect of Kobina Gyekye Hooper’s blatant theft: 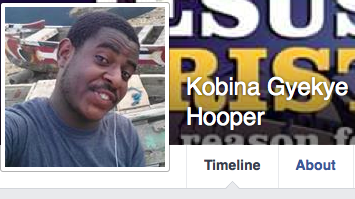 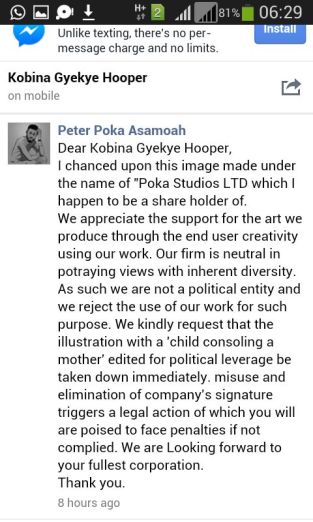 For his part, Poka has reached out to Kobina Hooper and asked him to address the theft as well. Again, Hooper has refused to respond. In a proper society, Poka could sue Mr. Hooper for plagiarism and seek redress, however there is no reason to have faith in Ghana’s judicial system, given the corruption that is rife within the system. And because Kobina Gyekye Hooper is utterly lacking in integrity, he has chosen to hide behind his private Facebook account, rather than acknowledge his wrong doing. Poka is just ONE of such artists to suffer this fate. How many others are there?

I plan to report the image to Facebook with a full explanation for why it’s offensive, since I cannot trust this NPP-supporting Ghanaian to do the right thing. I advise all party members, on BOTH sides of the aisle to hold themselves accountable so that these smaller incidents do not morph into SADA and GYEEDA level scandals. There must be a cohesiveness of thought and deed in any movement. MLK told us so. The SCLC was built on non-violence. Mandela told us so. The ANC was built on perseverance. What will Nana Addo or his handlers say to the sycophants who will use any means necessary, no matter how nefarious, no matter how injurious to an entrepreneurial artist scrapping for every cedi he can get in this failing economy? Who will be the next victim?

Have you ever had your idea stolen? Has anyone ever taken credit for your work? How did you address that violation?

This article has 36 comments