Marley Dias is an 11 year old 5th grader who saw a gap in what she was exposed to in her literary world and decided to fill it. When the New Jersey student expressed her frustration about the types of books crowding her curriculum – books about “white boys and dogs” – her mother gave the sort of classically Jamaican/African Mama answer that you’d expect from a woman of her stature. If you’ve grown up with at least one African(ish) parent, her retort will feel familiar to you:

“What are you going to do about it?”

Now, depending on the level of frustration and fatigue the African(ish) parent was experiencing at the time the subject was broached, this query might have been followed by, or coupled with, the rhetorical question: “Eh heh. And what do you want me to do about it again?” This of course would have been followed by a command to read all the ‘white boy and dog’ books in the curriculum with the advice that the child “…add Shakespeare on top, while you’re at it!” Naturally, there would be an expectation that A’s will follow and a tearful speech at graduation expressing gratitude for the long-suffering African(ish) parent forcing the child to consume excessive classic literature in. After all, when the African(ish) parent was your age, they didn’t even have books, but they managed to analyze and explain the significance of the conical bra in Okot p’Bitek’s Song of Lawino to peers and presidents!

See your life! You have books in this America I’ve brought you to, and still you complain!

Fortunately, Marley’s mother, Dr. Janice Dias Johnson’s response was more reasonable and measured… And the rest as they say, is history.

I first heard about Marley’s #1000BlackGirlBooks campaign from Rasheeda Sheers on Instagram. (*Plug: Rasheeda sells houses and condos, so if you’re looking to buy or sell, look her up! Rasheeda will have her contact details in the comments section later today! *End plug. ) She tagged me the GrassROOTS account where they detailed the motivation behind the campaign and its progress so far. Marley’s solution to what she identified as a very real problem was to source and read one thousand books that feature Black girls as lead characters. The response from the literary community has been overwhelming.

In reading up on Marley’s remarkable story, I came across a line in an article that posed a very serious question: ARE there a thousand books that feature Black girls as lead characters? The author then went on to gushingly surmise that if Marley couldn’t find them all, she would/could likely write them herself. The question reveals the struggle that many of authors of color grapple with  today: A lack of exposure.

There already exist a thousand titles with Black girl leads – we’ve just never heard of most of them! That’s why Marley’s project is such a gift to all of us. It gives us a chance to meet a whole new audience that we may have never had the chance with to connect before. 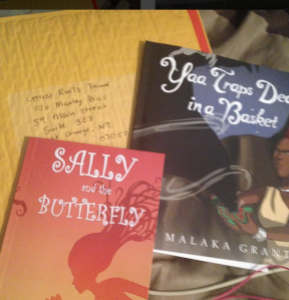 It should come as no surprise that I nearly broke my neck trying to get to the post office to mail off copies of Sally and the Butterfly and Yaa Traps Death in a Basket in order to get them delivered before the February cut off date when the campaign comes to a close. Girls like Marley – kids who yearn to see themselves reflected positively, powerfully, realistically and ethereally – in literature are the reason that I wrote both books. Their affirmation is the reason that sequels will follow! The idea that a  child in Jamaica – where my and several other authors works will eventually land – will be holding, enjoying (or hating. That’s always a possibility) and sharing my book is thrilling. The idea that they might look at Sally, or Yaa, or the girls from the Sugar Plum Ballerinas, or the unnamed dancer from Firebird, and identify her as a favorite or a future inspiration makes my heart so glad it could break.

You can tell from Janice Dias Johnson’s interaction with her daughter that she couldn’t be more pleased and proud of her accomplishments so far. Marley is an exceptional child who has surrounded herself with exceptional friends. She forms part of a trio called B.A.M. (short for Briana, Amina and Marley) who blog about pre-teen struggles, interests and observations on their blog We Love BAM. Did I crow when I discovered their blog? Yes I did. I love me some budding bloggers!

Finally, I hope that once the campaign has reached its conclusion that a comprehensive list of all the titles Marley was able to amass will be made available to the public so that other kids can see the oasis of literary choices available to them beyond the mainstream classics. There is a generation hungry to see itself represented in a culture of reading. I’m honored to be among so many talented storytellers and illustrators that have prepared a table to satisfy this appetite.

Did you have a favorite character of color growing up? Maybe she was Chinese or Mexican or Kenyan?  (If you say Dora the Explorer, I will find you and beat you.) Discuss!

Are you looking for strong female leads for your kids? Copies of Yaa and Sally are available at StoreFoundry and Amazon.

The “Mommy Wars” Have Made it to Africa, and They Are Uglier Than Ever