Before I went to bed last night I drank 32oz of blueberry cider, a treat I had scored while on sojourn to Southern Belle Farms in McDonough, GA. Liya and her kindergarten class were on a field study during which it was incumbent on all in attendance to pick strawberries and warble a country-fried rendition of Old McDonald at the behest of a sun-burnt man with a white beard and bowed legs. Naturally, Liya had to use the bathroom in the middle of this fest and naturally the toilet was on the other side of the field…about a 15-minute walk.

Okay. Okay! FINE. It was more like 5.5 minutes away, but considering my weight and the intensity of the sun’s beams, it increased the time and distance to the location by a factor of 3.

So as I was saying, I’m drinking this massive cup blueberry cider because I’m in no mood to share. No else one in my house deserves it. I sipped the child juice and recalled what I was made to endure that Thursday afternoon. Have you any idea how humiliating it is to watch a wagon full of five and six year olds scream, “Come on, Liya’s Mom! Don’t give up! We won’t leave you!” as you gingerly lumber through rows and rows of ripened strawberries? Doubtful. So I drank MY well-earned juice and I went to sleep.

Blueberry cider must be a natural laxative.

I just Googled it. It IS a natural laxative. This is important. Just wait!

Today marks Marshall and my 11th wedding anniversary. 2016 also marks 20 years spent adoring and annoying one another. After 11 years of marriage and 20 years of fairly intimate acquaintance with someone, there are certain pretenses that you abandon…like farting in front of your spouse.

The sky was still dark and the birds had not yet begun to chant their morning song. My husband filled up the emptiness when whispered sweetly in my ear, “Happy anniversary, babe….”

I responded with a long, silent, violent fart.

He flailed about helplessly, gasping for fresh air before informing me that I stank. I guffawed at his nerve.

That was unfair. Morning breath IS unpleasant, but blueberry fart is far more noxious. But I wasn’t going to admit that to him.How dare his mock his wife’s inner essence.

Instead, over the course of the next 20 minutes I continued to simultaneously blow gas from my ass and giggle about how much I loved being married to him until the entire circus became too much for my husband to handle. He leapt from the bed, wheezing and calling on the name of the Lord, scrambling to the bathroom in search of something. Eventually, he came back (just as all men do) and declared that he was unable to find his desired item: some air freshener. I shrugged and told him he didn’t need it anyway. (Essence, remember?)

I groped in the darkness, unable to ascertain what nature of item he had placed in my hand.

“I thought we weren’t giving anniversary gifts this year!”

I sucked my teeth and turned on my phone to see what this man had surprised me with this year. Marshall gives me the most wonderful gifts. I’ve gotten diamonds and pearls, a Kate Spade bag (when it really mattered), trips to the spa….

I fumbled with the bag awkwardly. Its contents revealed this: 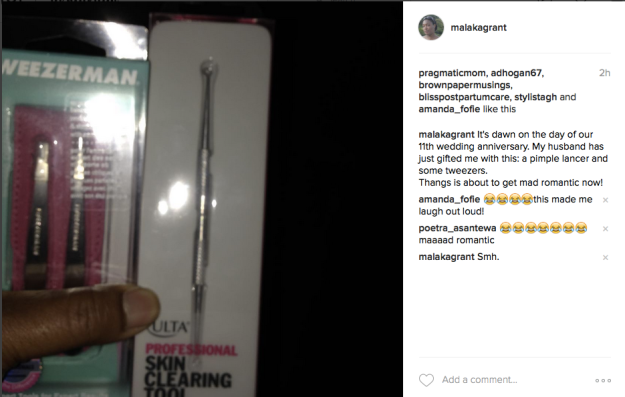 “Is this a pimple lancer?”

“Not just ANY tweezers. Professional tweezers. Top of the line tweezers!”

He couldn’t see me glaring at him in the darkness, so I suppose he mistook my silence for pleased shock and awe, when really I was in a state of incredulity. Just unbelievable! I just…He would choose our anniversary as the moment to highlight my facial hair and blemishes? I subconsciously began to rub my face.

“It’s our steel anniversary, and I figured I’d get you something that you’d actually use and that you could easily take on the plane.”

I mean, it’s a gift, right? And he was right – it IS a very useful gift. Not romantic, but useful. And that’s where we are as a couple, I suppose. Man, I can’t wait to run to CVS and pick out HIS anniversary gift.

So often we are advised to keep spice in our marriages in order to preserve their longevity. For some folks that means jet setting off to Bucharest at a moment’s notice. For others, it means sacrificing a few packs of Coors and actually paying the electricity bill on time so that you can have lights for dinner this month. And for the Grants…well, you’ve seen for yourself.

I haven’t necessarily “learned” anything new about marriage this morning. I suppose the events that transpired at 5:30 am were more of a reminder that marriage is unpredictable; people even more so. You think you know everything there is to know about your spouse and after this many years of co-habiting and co-sleeping, this person still has the ability to surprise you. It’s an amazing thing.

That last line was meant to be my conclusion, but I’ve just been wished a “Happy Stink-A-Versary” by my husband.

Let me get on over to this drug store so that I can retaliate.

Happy anniversary to everyone celebrating a May wedding! How long have you been married? Have things changed drastically since you said “I do?” What’s the strangest gift your spouse has ever given you? Discuss! 🙂