The kids were fighting in the back seats of the car, making an unholy ruckus, fighting about who had breathed the last of whose air and why it was so unfair. We were taking a day trip along the Garden Route, destination: I Can’t Recall. After 15 minutes I’d heard enough choruses of “Giiiiive-ugh!” and “Miiiine-ugh!” to last me a lifetime and was thus compelled to do something completely out of character. I turned on public radio. (Pandora is not an option outside of the US.)

Soon, our car was flooded with the sounds of native Afrikaans and Xhosa radio announcers, no doubt encouraging us to attend one event or purchase one product or another. Either way it was all preferred alternative background noise to me. One presenter with a particularly smooth voice caught my attention. I liked how he was saying what he was saying, but that harsh Afrikaans accent was grating on my ears. How could people grunt, growl and hack through so many words so many times a day without spitting up esophageal matter? I turned to my now silent kids, amused by a sudden thought.

“Hey guys! When you go to school, you’re going to have to learn how to speak Afrikaans just like this too!” I cleared a bit of phlegm in my throat for emphasis.

They recoiled at the very idea.

“Me neither,” said her echo.

Soon the car was filled with vehement protestations – a visceral reaction at the very idea of having to speak a language from a people that they had no relation to or nothing in common with. I allowed them their moment of “American individuality”, knowing full well that after all the noise had died down, they would have no choice but to comply when school started. Some phenomena are universal. You gone do this math exam and you gone write this paper in Afrikaans!

They will be exempt from being tested in Afrikaans, an exemption that expires after two years. Eventually, they will learn the language not because it’s a mandate; because both Marshall and I want them to. 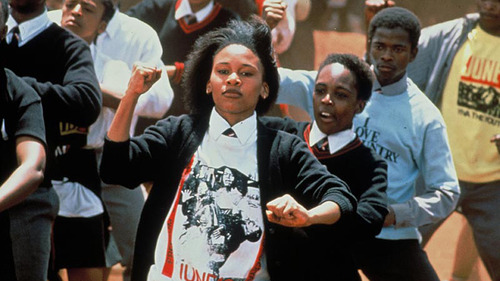 Today is June 16th, and it is the 40th anniversary of the Soweto Uprising. If you’ve ever seen the movie “Sarafina”, you have a vague idea of what the youth uprising was all about. In the 1950’s, South Africa and North America had adopted similar social and political attitudes with regards to race relations in each respective country. Apartheid and Jim Crow were fraternal twins living half a world away from each other. The Bantu Education Act was signed into law in 1953, providing Black South Africans with an education so parochial that they were only rendered fit to work as domestic servants post graduation. The Mission Schools that the British (who were far more tolerant in their racism than their Boer counterparts) were abolished. It was in these schools that scholarly minds such as Nelson Mandela received a premier education and allowed him to navigate white supremacist political structures in his country.

In fact, he spoke Afrikaans with such authority and excellence that some Afrikaners were intimidated by his eloquence. Why did he expend the effort to learn the language of the oppressor? According this his fellow prison inmate, Saths Cooper, “He argued it was all a question of knowing your enemy. His position was that you had to know their language, their passions, their hopes and their fears if you were ever going to defeat them.”

Now, my family not in South Africa to be anyone’s enemy nor to defeat them. That’s not our motivation for having the kids and us learn to speak Afrikaans. I believe the same principle of understanding applies if you are on a mission to make friends, conduct business…or to understand basics of the environment in which you live.

I am always amazed by the melting pot of languages I encounter on a day-to-day basis. Everyone here can speak at least two languages. I see Black South Africans exhibiting the most versatility. I have yet to see an Englishman or Boer speak Xhosa in the town in which we reside, but I see Xhosa women slip between Afrikaans, English and Xhosa with ease, depending on their function and whom they are addressing. It’s marvelous.

Last year, I was mulling over the possibility of having Sally & the Butterfly translated into Afrikaans for the kids in the township that we worked in during our 2011 stay. A Ghanaian friend of mine who works in social justice circles balked at the idea. I could hear her frowning through the phone. She is just as well versed in South Africa’s violent history as I am, probably more so.

“Why would you want your book translated into the language of the oppressor?” she trilled.

I thought about it. “Well…isn’t English the language of our oppressor?”

“Yes,” she said after a brief moment of consideration, “but I feel like we’ve made English our own. We’ve Africanized it. We own it.”

I’d like to believe that in post-apartheid South Africa, the once openly oppressed colored/Black banker, the domestic worker and/or business owner can say the same thing – that all though this language was once forced upon them, and brutally so, that they were able to master IT and make it their own. That’s what I want for my kids.

That, and you really don’t want to be that one chick at the salon who everyone is talking about and you can’t say a word in clapbackery.

White People Really Need To Talk To Their Kids About Apartheid

‘Club Quarantine’ Has Reminded Me Of The Enduring Power of Music