Not that that’s a problem.

I’ve all but abandoned the quest to guide and ensure my children’s happiness.

That doesn’t mean that I won’t do everything in my power to make sure that they are healthy individuals, equipped with the tools to lead sorta successful lives at some point in the future. But happiness? That’s not something I can do for them. It took going to Shack Church to realize this.

Our family goes to worship at a church in Kwanokuthula (Kwano for short), a township just outside on Plett in the direction of Cape Town. In township hierarchy, Kwano is where Soweto was in the 1980’s before Blacks, now armed with middle class income, moved (back) into the township and gave it an economic shot in the arm. There is another township called Qolweni that is about 2 miles down the road, westward. The folks in Kwano call Qolweni a bad place to live. It’s kind of like the pot calling the kettle black, but not really. This pot has some shine to it, ya dig?

Anyway. That’s where we worship.

Like any township, Kwanokuthula is subject to extensive power outages. These Sunday mornings without electricity don’t bother me. In fact, I prefer going to church without power. EVERYONE has to participate in praise when there it no electricity. There is no competition between the praise leader, her microphone and portable loudspeaker and the children in gumboots stomping their feet with the lights are out. It’s great. I love it. My children don’t.

The two Sundays that we have attended church in Kwano (two weeks ago we were in Port Elizabeth visiting at a colored church) my children have sat sullenly in their seats, their spoiled little faces curled up like sour milk, looking aloof and eager to do nothing else but leave.

They are not used to ‘doing church’ this way. In America, every charismatic church has a similar format: You have praise and worship in the main sanctuary, collect the offering, and send the children back to children’s church where they will be instructed in Biblical half truths and perhaps watch an episode or six of ‘Veggie Tales’. Then they’ll draw a picture of a cross with crayon and present it to their parents. It’s their reasonable service.

Ain’t no children’s church in the township. Ain’t no crayons and TVs. Ain’t no graham crackers in exchange for feigned obedience. Here, you have the word of God, some hymns, and for the next two hours, it’s all done in Afrikaans and/or Xhosa. If you’re lucky there might be a guy who speaks English in the congregation called up to translate a portion of it.

The first time my kids sat frowning and hunched over in their chairs after being so warmly greeted by our new church family, I felt sorry for them. This was new for ALL of us, and my husband was the only one who rushed into service with gusto and authority. I tried to soothe them with promises that it would all be over soon and we’d be home before they knew it; We couldn’t possibly sleep here, right? The guarantees did nothing to console them. They became more and more drear until the final song was sung and the township disappeared from view once we piled into our car. It was only then that the spirit of life filtered into their bodies and their attitudes became bearable again.

The second time (this Sunday) I was having none of it. They had just eaten a warm breakfast and had plenty of time to laze about until we announced that it was time to leave for church. It began with the youngest caterwauling the moment we pulled up in front of the building, protesting about the length and decibels of worship. I ignored her, but she’s a persistent Muppet. Eventually, she got a reaction from me, although it was not the one she was hoping for. The other three were sitting stone-faced yet again and I began growling under my breath as the spirit of revelation hit me.

Did they like that? Not one bit. Did I care? Even less.

Because in that moment – the moment where everyone else was singing joyfully about stomping Satan under their feet, complete with pantomime – I came to a divine understanding. If you can’t find happiness in a place where you’re within 15 minutes walking distance of a clean beach, have access to a river where you can fish and canoe, a big ol’ field to run around in, cable TV, snacks on demand and internet access (even if it IS sometime-y); and all it costs you is some obedience and/or gratitude? Then there’s nothing I can do to make you happy. That kind of joy is something you’re going to have to invoke from within yourself. In the meantime, you better sit up in this Shack Church and fake praise Him until you make it!

MOM Squad, can I tell you how free I feel now? I anticipate experiencing many moments of this sort of freedom. 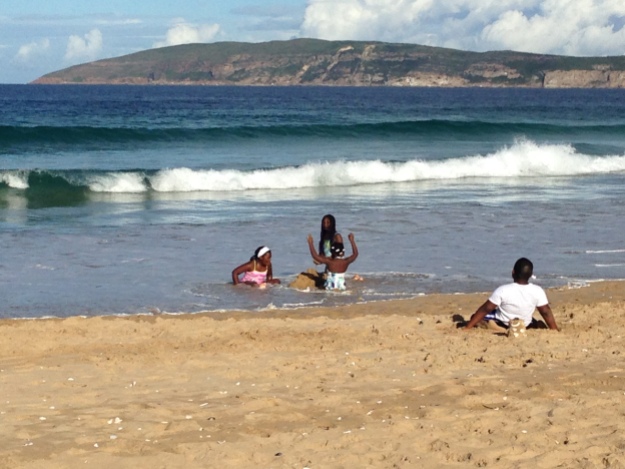 Now that summer break is officially on for everyone is the northern hemisphere, how has it been going for you? Do you feel pressure to keep your kids entertained every moment of the day? Do your children’s cries of “I’m booorrrred!” stir an unsettling emotion within you? Discuss!

A rainbow and a sign of God’s covenant. Get free, MOM Squad! Get freeeeee!!!!